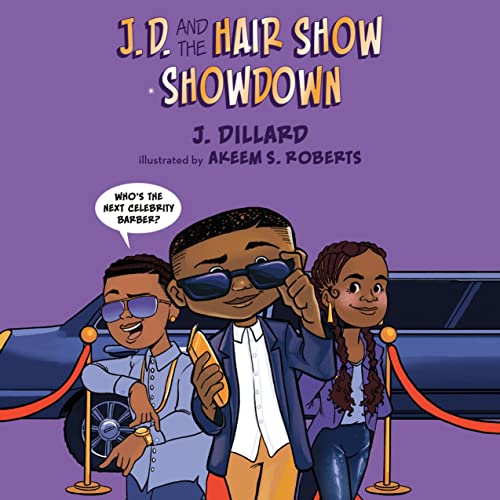 J.D. and the Hair Show Showdown

Eight-year-old kid barber J.D. takes his talent to an Atlanta hair show in this chapter-book series.

At only eight years old, J.D. the Kid Barber has already won a barber battle and appeared on local TV. Now he’s the youngest barber to be invited to the Beauty Brothers Hair Expo in Atlanta! J.D. gets the VIP treatment - he takes his first flight, rides in a limo for the first time, and gets gifts from the show’s sponsors. At the show, there are hair classes to take, product samples to try, and some of J.D.’s favorite hair influencers to meet. And, of course, there’s his own demo alongside kid hairstylist, Isabel Is Incredible. But what J.D. is most excited about is snapping a pic with eleven-year-old rap sensation Li’l Eazy Breezy, which is harder than it sounds! The world of hair and beauty is so much bigger than J.D. could’ve imagined, and he’s ready to step up his game.

Check out the other chapter books in the J.D. the Kid Barber series:
J.D. and the Great Barber Battle
J.D. and the Family Business

Special invitation from Audible!
Learn more about Membership
List Price: $15.40
You Save: $1.92 (12%)
By completing your purchase, you agree to Audible’s Conditions Of Use
Sold and delivered by Audible, an Amazon company
Share

5.0 out of 5 stars
5 out of 5
11 global ratings
How are ratings calculated?
To calculate the overall star rating and percentage breakdown by star, we don’t use a simple average. Instead, our system considers things like how recent a review is and if the reviewer bought the item on Amazon. It also analyzes reviews to verify trustworthiness.

There are 0 customer reviews and 11 customer ratings.
Back to top
Get to Know Us
Make Money with Us
Amazon Payment Products
Let Us Help You
EnglishChoose a language for shopping. United StatesChoose a country/region for shopping.
© 1996-2022, Amazon.com, Inc. or its affiliates