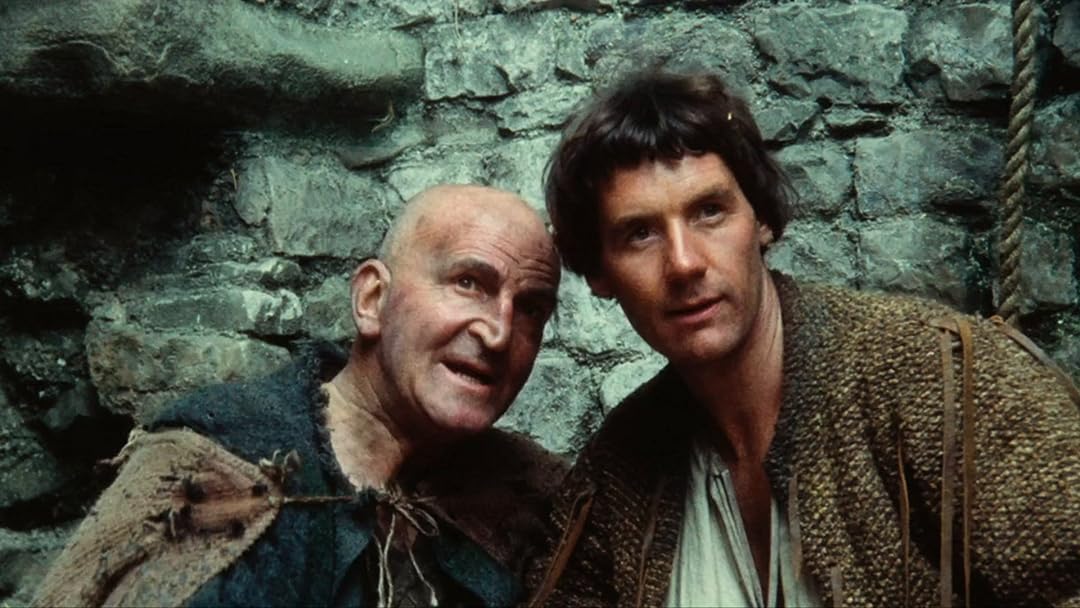 (740)
6.21 h 45 min1977PG
In the Dark Ages, a horrendous monster casts a dreadful pall of fear over a once-happy land. Dennis, a young villager who wants nothing of adventure, goes on a journey, leading him into a town where a dragon named Jabberwocky is on a murderous spree. Can Dennis kill the dragon and save the kingdom?

JBOReviewed in the United States on September 19, 2020
1.0 out of 5 stars
Inappropriate Child Nudity...?
Verified purchase
I am so confused by the lack of outrage over the fact that a small child is seen on screen taking out his private part and simulating urination. I cant imagine any respondsible room of adults thinking its okay to instruct a child to do that in front of a camera for entertainment....i can't believe all these people have watched this and not immediately turned it off when that happens because that's what I did. If you dont like seeing young childrens private parts then this movie is not for you.
26 people found this helpful

firgoldReviewed in the United States on October 4, 2020
4.0 out of 5 stars
A good early effort
Verified purchase
Terry Gilliam has done many wonderful and bizarre comedies. This is almost one of them.

As an early effort the pace is a tad slow and some of the jokes fall short. It also has that cheap barely funded feel that many of his projects have.

If you enjoy Monty Python, then you already know Gilliam's brand of humor as well as many of the supporting actors.

If this is a first encounter I'm not sure the awkward jokes will be very endearing and very likely this is a better film to come back and enjoy as a nostalgia piece after viewing some of his other work.

ALFReviewed in the United States on April 3, 2019
5.0 out of 5 stars
Finally, a high definition copy
Verified purchase
This is the first post-Python movie directed by Terry Gilliam. It stars Michael Palin, and has cameos by Terry Jones and Terry Gilliam, so Python fans will feel right at home.

The main character is Dennis Cooper. Dennis' star-crossed romance/adventure is funny sometimes. Other times it is a bit slow. Dennis bumbles through somehow and fulfills the request of King Bruno the Questionable.

Gilliam's direction is brilliant, given the low budget.

The disk is a high definition scan from the best copy available. The transfer looks better than any former copy I could find. (yes I had it on VHS...) No "extras" on this Criterion release.
14 people found this helpful

Human ShieldReviewed in the United States on October 16, 2020
1.0 out of 5 stars
Meanspirited, badly paced, and gross
Verified purchase
This movie is, in a word, ghastly! It's dirty and gross and half the time it tries to be funny it's just being mean. It deserves some small distinction as my very first hate-watch, in that pretty much very minute of it I wanted to curbstomp its teeth out and make it eat them, and I kept watching only to heckle. Can't believe it has four stars - the "plot" spends forever going nowhere and then resolves everything (badly) in the last 20 minutes. Ghastly.
14 people found this helpful

joel wingReviewed in the United States on December 11, 2020
2.0 out of 5 stars
Terry Gilliam's 1st independent movie but story falls apart
Verified purchase
Jaberworky was Terry Gilliam’s first feature film after he left Monty Python and featured Michael Palin of that comedy troupe as well. A kingdom is being terrorized by a beast called a Jaberwocky and Palin becomes the unexpected hero. There’s a lot of the irreverence that Python was known for in the movie such as the king is watching a jousting tournament and gets splashed in blood after each match. Of course there are other funny moments like Palin constantly being peed on. You can see a lot of the style and techniques that Gilliam would use in later movies as well. The problem with the film is that halfway through the story seems to lose its way and just stumbles its way through to the end.
C
8 people found this helpful

Richard P.Reviewed in the United States on February 10, 2022
4.0 out of 5 stars
Early Gilliam an Indicator of Wonderful Things to Come
Verified purchase
I spent a good majority of my high school and college years competing in a variety of speech events. This included a relatively brief period in poetry, a weird category for sure as you're essentially assessed on your ability to bring the author's life to words in ways that are creative and well-informed.

One of my poetry selections was Lewis Carroll's Jabberwocky, upon which this first Terry Gilliam solo directorial effort is loosely based. A grim medieval tale that balances whimsy and grimsy, Jabberwocky is equal parts comical and rather horrifying. Gilliam's work here vividly realizes the kingdom of Bruno the Questionable and focuses more on creating atmosphere than actual special effects.

This is a 1977 film after all, though that is also the year that gave us Close Encounters of the Third Kind and, of course, the very first Star Wars film.

Jabberwocky didn't make a dent at the box-office, though subsequent years have been kinder to it with the film also getting the Criterion treatment. While the film is undeniably raw, you can see the future of Gilliam peeking through.
One person found this helpful

MichelleReviewed in the United States on January 17, 2021
5.0 out of 5 stars
You have to appreciate British humor to love this movie. I do.
Verified purchase
Nothing less than expected. Very over the top characters and historical satire. It wasn't overly corney, just enough to get a good grin on. A few times I chuckled but held back the laughs because my liver hurts right now, yup, not a great idea to watch a funny movie with liver trouble but I couldn't back out once I started watching.

I admire the fact that British actors are very in tune with their caricature selves.
Well done people!
4 people found this helpful

P. JaroszReviewed in the United States on March 1, 2021
3.0 out of 5 stars
Only for Gilliam & Extreme Python Fans
Verified purchase
Those who appreciate Terry Gilliam as a writer & director will likely enjoy this movie. If you have no idea who he is, then you should probably avoid this. You’re sure to figure that out if you read a lot of the other reviews listed here.

If you’re expecting the same type of zany-absurd-yet-intelligent humor as a typical Monty Python movie or Flying Circus episode, then you’ll be a bit disappointed. There really aren’t any laugh out loud moments in Jabberwocky, just lots of chuckles at the dry humor and subtly clever, funny scenes. The only times you pick up any Python-esque humor is when the scenes hit you with the grotesque (which is one of their trademarks).

Kudos to Gilliam for capturing the look & feel of the filthy, grimy, run-down Dark Ages (obviously our perception of what we think it was probably like), especially on such a low budget. Michael Palin does an excellent job as naive-innocent-hopeless-romantic Dennis. (As a side note, it struck me as an odd choice for a name since it isn’t British, although I think it was meant as a subtle joke. Palin also played a ‘Dennis’ in a brilliant scene in Monty Python’s Holy Grail, which also took place during the same time period).

The bottom line is watch this if you’re a Gilliam or big Python fan, but you’ll likely regret watching it if you’re not.
2 people found this helpful
See all reviews
Back to top
Get to Know Us
Make Money with Us
Amazon Payment Products
Let Us Help You
EnglishChoose a language for shopping. United StatesChoose a country/region for shopping.
© 1996-2022, Amazon.com, Inc. or its affiliates