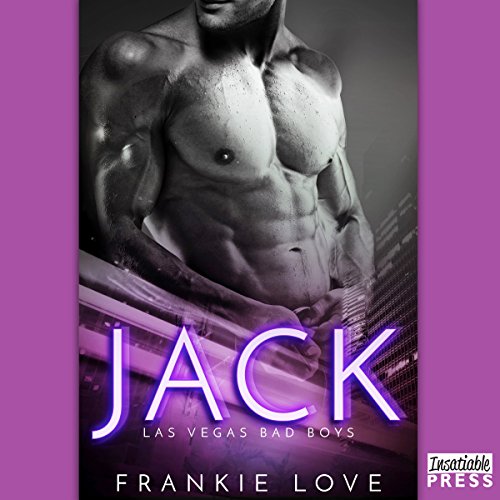 Onstage, I f--king kill it. I'm Jack Harris, a world-class DJ, with a $100 million offer on the table. I never have to ask for what I want. I get it, anywhere, anytime, anyone. After breaking up with my on-again, off-again girlfriend, I seize an opportunity when I see it. Sweet Tess, sitting there all alone, is ready to get swept off her feet. If only for just one night. I don't expect the paparazzi to show up the next morning, and I don't expect Tess to have secrets that make her run from the press. But damn, I want to protect that girl. I need to protect that girl. And I won't let anyone stand in my way.

Look, I know it's foolish to imagine Jack Harris ever falling for a cocktail waitress like me - but I can't help it...that bad boy is hot. When he offers me a night I'll never forget, I'm all in. This is my wildest dream come true. One look at his naked body and I know he is going to deliver. And he does, over and over again. But after, when he cradles me in his arms, holds me tightly and kisses me softly, I know that we could be something more than a one-night stand. Except I'm not the innocent girl Jack thinks I am. I have secrets, blood on my hands, and I will do anything to keep my past buried. But it's catching up to me faster than I can run.

Your audiobook is waiting!
Learn more about Membership
List Price: $13.96
You Save: $2.01 (14%)
By completing your purchase, you agree to Audible’s Conditions Of Use
Sold and delivered by Audible, an Amazon company

TamVanGlorious
5.0 out of 5 stars The Last Bad Boy Falls
Reviewed in the United States on October 21, 2016
Verified Purchase
Jack grabs Tessa to prove himself in front of his friends, and ex-girlfriend. Tess has had a crush on the DJ for awhile, but her super-scary past has her ready to bail, even before the friends-sort-of get more attention than either of them need.

This is the best book of the series, and here's why: 1) Jack is a good guy, the whole time. And so are his parents. 2) Tessa's story is complex, and keeps unfurling way beyond what I have come to expect from this author. Tess is stubborn but not stupid, and does none of the running away that all the other women have done (not necessarily willingly all the time, but still). And 3) although I have a few quibbles about one or two plot points, there seem to be no wasted characters, meaning the combination and continuity of series' storylines was done well.
Read more
7 people found this helpful
Helpful
Report abuse

Mons
4.0 out of 5 stars Jack of Kings
Reviewed in the United States on August 9, 2017
Verified Purchase
Jack is Awesome! Once he knows what he wants, he goes for it.

Ted's is quiet, unassuming and blends in. She doesn't want the spotlight and has a past she is running from.

After breaking up with his girlfriend, Jack decides that Ted's is the lucky woman to have a one night stand with him. Little do they know that this will turn their life upside down and bring Ted's the exact attention she was so desperately trying to avoid.

Her life is under threat and all she wants to do is run.
Jack is having none of that and Tess gives him the barebones of her past. Suddenly he knows what to do and whisks her away to his parents place. There they get to know each other better. Having to go back to reality is not really what Tess wants. However, Jack has commitments he needs to fulfill.

Things take a strange turn when Tess starts having flashbacks to things she can't place. Things come to a head at Jack's performance when her past catches up with her in a big way.

Joyce
5.0 out of 5 stars LOVED IT, SORRY TO SEE IT END
Reviewed in the United States on June 1, 2016
Verified Purchase
Oh no, what will I do now, I neeeed more Jack what will I do without my JACK. FRANKIE, YOU ARE A PHENOMANAL WRITER!!
The story is heartwrenching! And I loved every minute of it, but JACK, OMG, I'm going to read these 4 books over and over, till I can actually belive he is only my book boyfriend, and not real. But that is how well Frankie Love writes, the words and characters just draw you right in
LOVE LOVE LOVED THE ENTIRE PREMISE OF THE STORY
PLEASE PLEASE WRITE MORE if not more Jack, then give me another hot book boyfriend
BEST 4 BOOK SERIES........WRITTEN
REALLY HARD TO SEE IT END
HEY , GIRLS OUT THERE, YOU REALLY NEED TO READ THIS 4 BOOK SERIES, YOU WILL NOT BE DISAPPOINTED
THANK YOU FRANKIE LOVE
Read more
5 people found this helpful
Helpful
Report abuse

Hopeful
4.0 out of 5 stars Jack and Tess/Rachel
Reviewed in the United States on July 30, 2016
Verified Purchase
Great story, twist and steam. 4*s and not 5? Honestly, because of the way he called her "girl" drove me nuts, just sounded wrong in my head, she's not a dog. That and referring to his manhood as "rod", yeah, just, no, nope, nuh uh. If it wasn't for that 5*s for sure.

Cliffhanger, no. Cheating, no. Good, story...incredible, a twist I would've never guessed, especially since this is the first book I read in this series, so no background for me. HEA, yes and then some. Sex, steamy, a bit much at times but expected in this type of read. Typos a few but should be overlooked, the story and characters deserve it. This is an honest review, I don't know the author and was not asked to give my opinion.
Read more
2 people found this helpful
Helpful
Report abuse

Anne M.
2.0 out of 5 stars It seemed like she was 2 different people
Reviewed in the United States on September 13, 2016
Verified Purchase
Even though this is a stand alone, you really need to read these in order. Otherwise, you're confused when the other characters and situations are mentioned. I couldn't understand Tess' character. It seemed like she was 2 different people. I love a good sex scene like everyone else but these were just too unreal and annoying. Found myself actually skimming past them. I finally quit reading at 60% because I couldn't do it, which is very sad. I really did love the story line but I couldn't feel the chemistry between Jack and Tess and the only reason why I kept going was too find out what she was running from which made her character even more confusing.
Read more
One person found this helpful
Helpful
Report abuse

Sabrina L.
5.0 out of 5 stars Page turner alert
Reviewed in the United States on May 31, 2017
Verified Purchase
Another amazing book by the amazing Frankie Love.
Of all the Las Vegas bad boys Jack is my favorite. This story is a wild ride filled with action, adventure and some seriously steaming scenes that will leave you hot and bothered.....but in that deliciously good way.
The chemistry between Jack and Tess is off the charts hot and the characters back stories are just as enthralling.
Jack is a true page turner so make sure you clear your schedule before starting this incredible story.
Read more
One person found this helpful
Helpful
Report abuse

BridgetReads
5.0 out of 5 stars This book will not disappoint!!!!!!
Reviewed in the United States on January 9, 2017
Verified Purchase
jack is a world renowned DJ who loves to amp up a crowd. Tess is a girl trying desperately to hide in the crowd and draw zero attention to herself....because her ackground is sordid with horror And heartache. This a a great story of love conquering all!! also the final in the Vegas boys series. These books should not be missed. they are hot and steamy, but also have a great story.

Kindle Customer
4.0 out of 5 stars Jack...
Reviewed in the United States on March 6, 2019
Verified Purchase
The Las Vegas Bad Boys book 4. Loved this story. Tess has a crush on unavailable Jack. But when he becomes available all hell breaks loose. Secrets of the past mixed with jealousy of the present makes an adventure they did not plan. In between all that hella drama, passion and action action action.
Read more
Helpful
Report abuse
See all reviews

Gwennie
5.0 out of 5 stars another must read... this book has a ...
Reviewed in Australia on January 23, 2017
Verified Purchase
another must read... this book has a bit of everything.....spicy, mystery, not just a 2 minute wonder, A book that you don't want to put down. Each book can be read alone but curiosity nibbles at your brain and you have to find out about the others in the series....If you are not into steamy sex scenes then this series is not for you
Read more
Report abuse

B.
5.0 out of 5 stars Whoo kept me on my toes.
Reviewed in Canada on February 9, 2017
Verified Purchase
WHOO kept me on my toes. So lovely Tess/Rachel finally reunited with her family. Reason why Ryan wasn't attracted to her. Lovely plot.
Read more
Report abuse