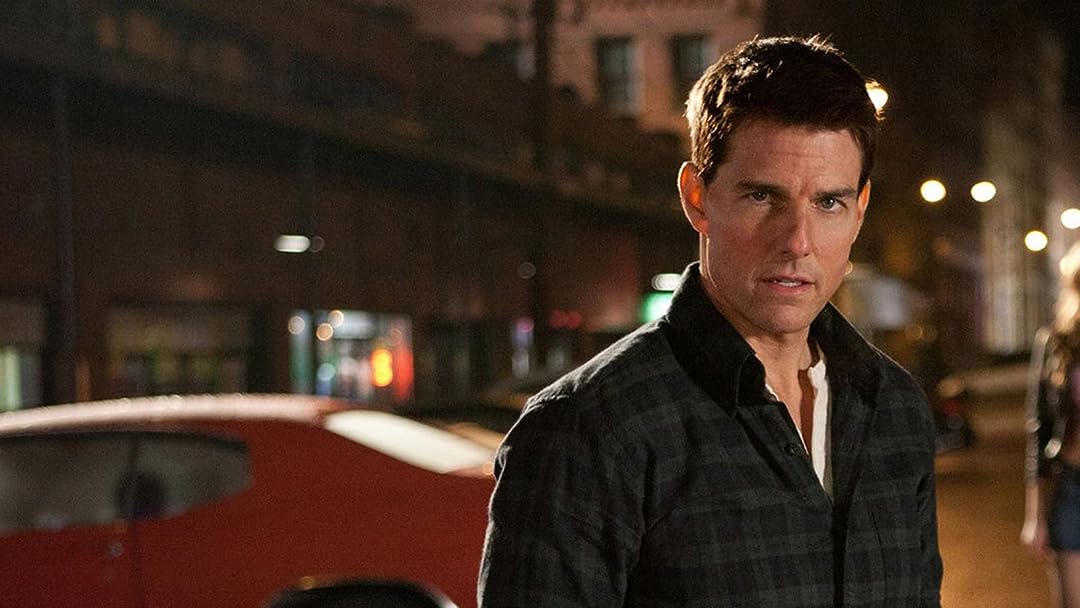 (30,401)
7.02 h 10 min2012X-RayHDRUHDPG-13
A homicide investigator digs deeper into a case involving a trained military sniper who shot five random victims. Based on a book in Lee Child's crime series.

SpewbacaReviewed in the United States on January 3, 2022
1.0 out of 5 stars
People were right, Cruise as Reacher is about as far off the mark as you can get.
Verified purchase
After reading the Jack Reacher books, I wanted to watch this again, and yeah, I know what people are saying now.

Jack Reacher is 6'5" and 250lbs as written, and his favorite moves are headbutts and kicks to the groin.

Tom Cruise is probably a foot shorter, and if his Reacher character headbutted someone, it'd probably be to their nipple. It's be a bit like if you put Kevin Hart in the game to guard Shaq.

His acting is also crap but typical Cruise.

Can't wait for the reboot, when hopefully the Reacher character is given a new lease on cinematic life.

Joshua JordanReviewed in the United States on September 24, 2017
5.0 out of 5 stars
They should give Werner Herzog a back-story film playing his character from Jack Reacher...
Verified purchase
I saw this in the theatre originally & didn't think it was that great, but I have returned to it & grown to admire this film's charm. Tom Cruise plays an ex-Army investigator turned into a "hobbyist" shadow, living a romantic vision of American independence. When 5 random people are gunned down in broad daylight, an ex-Army sniper is accused with overwhelming evidence within 24 hrs - he is given the choice, confess or face the death sentence. Innocent, the accused killer asks for Jack Reacher & says nothing further - but, the two may know each other, it certainly isn't based on a friendly encounter during service; the accused killer has his own demons & Reacher knows exactly what he is capable of doing.

After seeing the killings on the news and recognizing his former acquaintance, Reacher orchestrates an appearance out of seemingly thin air - his intent is to bury the ex-sniper. However, the district attorney's daughter believes the courts are favoring unfair practices & denying those accused of crimes due process - she is able to convince Reacher to help as her lead investigator. Soon Reacher becomes a target by thugs seemingly everywhere he goes - each time he swiftly thwarts attempts to get him off the case. It becomes clear to Reacher there is something much more sinister happening involving, perhaps, even the district attorney himself.

The film plots a smooth escalation of intensity as the mystery unfolds. Tom Cruise is the unbeatable stereotype, but with intelligent writing, I think it works. Appearances are made by Robert Duvall, a grizzled ex-Marine sharpshooter and gun-range owner - after the standard Army-Marine banter, Duvall agrees to help Reacher. The real treat is the antagonist of the film - played expertly by famed Director Werner Herzog (if you are unfamiliar with him, he is a brilliant filmmaker and can be hilarious with his deadpan German delivery - e.g., The Grand (2008) - or disturbingly psychotic as he is in Jack Reacher).

The film has all the elements of a true American action/thriller - dubious cops, expert-level veterans, muscle cars, chase scenes, hand-to-hand combat, guns, grizzled old men, lowly street thugs, cute girls, the wrongfully accused, and a German playing a Russian lunatic. It has all the elements to be utterly cliche, but the story is smart and compelling and the casting is on target preventing Jack Reacher from being a mere spectacle. It's a great film & I am glad I gave it a second chance - I think it's definitely worth a viewing.
80 people found this helpful

C. SzolcReviewed in the United States on April 26, 2022
5.0 out of 5 stars
The movie stands apart from the book
Verified purchase
This movie isn't the book. That's okay. For those bedazzled by every concrete element in the books, you won't be able to enjoy this.

For those who understand the spirit of the books, this movie elevates the material. The acting is superior. The action is creative and the fight scenes are excellent.

The violence is extreme, but not gratuitous. There is subtle humor that creates dimension. Editing is great. The director makes smart choices, particularly in letting Cruise do what he does best. This is a very good action movie.
8 people found this helpful

joel wingReviewed in the United States on July 21, 2021
3.0 out of 5 stars
Tom Cruise is like Sherlock Holmes if he was a Navy SEAL
Verified purchase
Tom Cruise plays Jack Reacher a man of mystery. He was a highly decorated soldier but there’s nothing else people really know about him. A sniper Joseph Sikora randomly kills people and asks for Cruise who investigated him before. The film is part investigation (Cruise looks into the shooting), part action (Cruise beats some people up and gets into chases), part thriller (Why would Sikora ask for Cruise?). Cruise is like Sherlock Holmes if he was a Navy SEAL. He can break down clues as well as beat up five guys at once. It makes what would otherwise be a rather routine story more interesting. The real question is how did they get famed German film maker Werner Herzog to appear????
7 people found this helpful

Doctor GangreeneReviewed in the United States on February 21, 2022
5.0 out of 5 stars
It's Tom Cruise... but it's a GOOD movie.
Verified purchase
Former military MP Major Jack Reacher, a special investigator with the Army... is now a drifter living life on his own terms and enjoying his retirement. Until something bad happens to some people who don't deserve it... then he steps in to find the truth and punish those who do deserve it.

Fight scenes are phenomenal. Grounded in reality, solid martial arts moves. Characters are complex and relatable. Story/plot is believable. If you like a good crime drama, a good mystery, and good butt-kicking action, then you'll like this movie. They made a sequel to this (stand-alone story though), and Amazon Prime just released a mini-series based on the novels that this movie was drawn from. Those are good, too.
4 people found this helpful

GabeReviewed in the United States on June 14, 2022
5.0 out of 5 stars
Asked for God's Help
Verified purchase
After watching this movie 40 times in the past 50 days, I glanced up at the review score and noticed that half a star was missing from the set. I immediately jumped out of my chair, got on my knees, and asked for God's help, as I knew this level of rage was not extinguishable on its own.

This might be my favorite Tom Cruise movie of all time. Huh? Because of the mellow drive. It's Tom Cruise yes, with all its glory and intensity, but mellowed out into a nice sweet package. The actors are all pro quality and the story is clean with a nice level of complexity.

To those fellows who also rated this five stars, I solute you. You are obviously of an elite fiber and in a class far beyond the rest, and deserve more than your fair share of pleasure and success. To those who didn't, let me peacefully say with a sympathetic heart: maybe crank isn't your drug, albeit your drug of choice. I don't think I'm saying anything out of line here.
One person found this helpful

Amazon CustomerReviewed in the United States on March 17, 2017
5.0 out of 5 stars
Awesome action packed movie!
Verified purchase
An ex military sniper is arrested for killing five random people and severely beaten. Before he slips into unconsciousness he asks for Jack Reacher. Jack arrives and notices that things don't add up. The evidence is too easily found. Someone is following him and when hired goons try to get rid of him he knows for sure something bigger is going on.
31 people found this helpful

Thinker3Reviewed in the United States on June 12, 2022
5.0 out of 5 stars
The Pursuit of Justice
Verified purchase
I wanted to see whether this was the Jack Reacher film I had already seen--it wasn't. So, I started playing the first few minutes after midnight. That was a big mistake. We couldn’t turn off the film until the end and ended up staying up much later than we had planned. Just before we turned it on, my wife announced that she couldn’t watch a movie, but she was thoroughly involved in it. One thing that makes it engaging is the action. It’s intense from start to finish. But there’s more to the film, namely, the character of the title figure. Reacher—superbly played by Tom Cruise—was an thoroughly upright army investigator who came to the US—he had grown up abroad—to experience the freedom he had devoted himself to defending. Quickly disillusioned by the corruption and by the widespread frustration and despair of ordinary Americans, he drops off the grid and disappears. Provoked by a mass murder committed by someone he had investigated in the Army, he introduces himself to the DA and the police investigator in charge of the case. Of course, things are not what they seem. As you might expect, it is up to Reacher to take on nearly single-handedly a battalion of crooks and thugs. At the film’s end, he is described as someone who has no concern for public opinion or even the law, but is motivated by the pursuit of justice. He is the classic American hero. That's what makes the film special. I was pleasantly surprised that there was no romance in the film. The opening scenes in the film contain some subtle clues. Connecting them to what comes later is part of the fun.
One person found this helpful
See all reviews
Back to top
Get to Know Us
Make Money with Us
Amazon Payment Products
Let Us Help You
EnglishChoose a language for shopping. United StatesChoose a country/region for shopping.
© 1996-2022, Amazon.com, Inc. or its affiliates