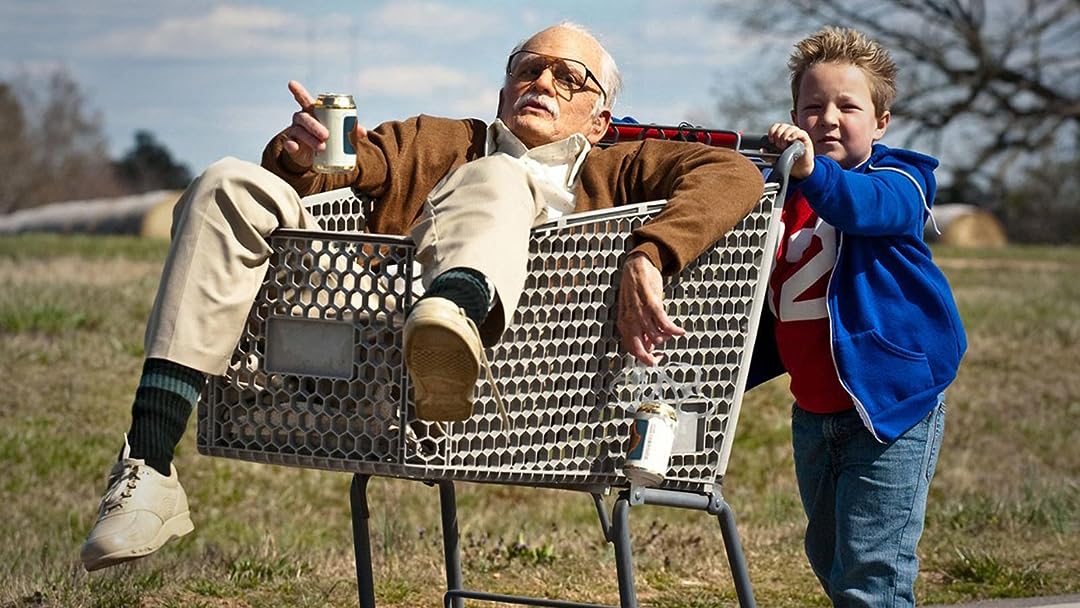 (10,404)
6.51 h 31 min2013X-RayR
Johnny Knoxville reprises his jackass role as 86-year-old Irving Zisman in the story of an old man saddled with the care of his grandson. The two hustle their way across America on an outrageous road trip pranking unsuspecting, real-life people.

joel wingReviewed in the United States on June 24, 2019
4.0 out of 5 stars
If you like Jackass and inappropriate comedy than you'll love Bad Grandpa
Verified purchase
Bad Grandpa was a derivative of the Jackass series. Originally, one of the shows’ creators Spike Jonze would dress up like an old lady and walk up to unsuspecting people and do skits.

That led to Bad Grandpa where Johnny Knoxville dressed up like an old man and played grandpa to child actor Jackson Nicoll. Like Jackass the two would walk into unsuspecting locations and start acting outrageous to get people’s reactions.

Just like Jackass Bad Grandpa really pushes the boundaries of good taste. For example one of the first skits is Knoxville at a gas station where he pretends that his private parts are stuck inside a soda machine and he asks for people’s help. In another Knoxville and Jackson are in a restaurant and Knoxville gets gas and then projectile poos on the walls. In another Knoxville tries to ship his grandson in a large box to his father because he doesn’t want to drive him. When the ladies at the store see that there’s a boy inside one asks if he wants a blanket, while the other says they can’t send human beings. If you can watch that and see the comedy in it then Bad Grandpa is for you. I always liked Jackass so I thought this was a hilarious movie.
C

Reviewer XReviewed in the United States on December 21, 2014
5.0 out of 5 stars
Filthy But HILARIOUS!
Verified purchase
I can't remember the last time anything made me laugh so hard. It's one of those things that's difficult to watch because it's awkward, embarrassing, and just plain WRONG on so many levels, but at the same time, so freakin' funny you can't stop, even though it may make you squirm a little. Some of the funniest scenes (the strip club and the diner especially) actually made me glad that I was watching alone. Pretty much the whole movie was one laugh after another, and the thing he had going throughout most of the first half with his dead wife was an absolute RIOT!

I am not much of a Jackass fan only because I don't like seeing them injure themselves, and some of their stunts look painful. That said, in this movie Johnny Knoxville is fantastic (as was his makeup), and a true genius. I had to keep reminding myself each time I began to marvel about how well he could run, dance, and jump around that he isn't actually an old man--LOL! He's really THAT convincing. The kid was great too. Normally I find mouthy kids to be obnoxious and avoid films that feature them, but this boy was SOOOO funny!

Definitely see it if you have a good sense of humor, are open minded, and don't buy into the idiocy that is "political correctness". If you're a fan of twisted, black comedy, this movie will not disappoint. If you're prudish, or can't comprehend why over-the-top, in-your-face, blatant, offensiveness IS funny, then this movie isn't for you. For the rest of us who see that there are far worse things in the world than "Bad Grandpa" and are happy and grateful for a reason to laugh--this movie is a treasure.

SpeedreaderReviewed in the United States on March 9, 2014
5.0 out of 5 stars
funny @$$ movie & I'm not a jackass fan
Verified purchase
Ok, I'm not a jackass fan. Matter of fact, I think those movies are really dumb & can't imagine anyone paying to see them. However, when I saw a trailer for Bad Grandpa I thought I could possibly be converted - and I was.

Not only is the 'grandpa' character hilarious in this movie, but the kid....the kid is unbelievable & I don't think they would've had much of a movie without him. He keeps a straight face throughout the entire movie, even through his grandpas crazy stunts & insults. I don't know how he did it.

The funniest scene in this movie is **SPOILER ALERT** when the kid dresses up & enters in a children's pageant as a girl. He starts his dance routine all simple & cute a la 'good ship lollypop', then the song changes into 'Cherry Pie' and he rips off his dress, exposing his lingerie, and thrusting on the ground like a stripper. The looks on the pageant mom's faces in the audience is classic....apparently, it's ok to dress your child like a whore, but not ok if the child dances around on the stage like one. There are other funny scenes, but this one is so classic & funny that I actually went back & watched the scene again. Unreal. I bet the cameramen were having a field day shooting that scene!

The credits are also funny to watch, as they go through how they told people they were shooting a movie (after-the-fact, of course). Overall, I thought the movie was genius, even though I'm not a jackass fan. If you've got an hour-and-a-half to kill - rent it, it will make you laugh.
5 people found this helpful

Amazon CustomerReviewed in the United States on October 18, 2020
5.0 out of 5 stars
one of my favorites
Verified purchase
I have watched this movie over and over. Some parts can be a little slower but believe me when I say the movie makes up for it many times. The kid in this working with Knoxville is hilarious and this movie was genius. My husband and i laughed so hard we had tears. The story was actually really good and heart warming. And pants warming if you end up laughing too hard....
2 people found this helpful

CrankReviewed in the United States on March 19, 2015
5.0 out of 5 stars
Excellent work.
Verified purchase
I loved almost every minute of this. I'd give it 4 stars normally but I think it is rated too low on Amazon. If the Jackass stuff is too raunchy or outrageous for you then I think this may be your cure. I have ALWAYS loved Jonze and Knoxville doing the old couple. I always thought it was one of the best parts of the Jackass series. And here we get an actually, somewhat, touching story played for laughs and heart with the old man as the centerpiece. No, it isn't going to win an Oscar for acting or directing, but in actuality Johnny does the film right and really does make this character his own. The kid is mostly fantastic, superb in the pageant scene, and the make-up artists were actually nominated for an Oscar. And they deserved it.

No other film is quite like this. Hidden cameras are used everywhere to provoke reactions, and the setups are all but maybe one or two thought out extremely well. In fact, there isn't too much you could do to make the movie better. A perfect film to see with your teenage kids or just by yourself. HILARIOUS.
2 people found this helpful

Paul A. KlingerReviewed in the United States on February 22, 2014
5.0 out of 5 stars
Not For Everyone's Taste But Extremely Funny
Verified purchase
I didn't care much for the first "Jackass" film, though a few sequences were truly funny, so I avoided the sequels. But some
acquaintances told me that "Bad Grandpa" was much better and very funny, so I rented it on Netflix. I think I laughed as much
and hard through this movie as any I have ever seen, including "Airplane", "Dumb and Dumber", and "Something About Mary".
Rude and Crude, this is not for people who are easily offended, or find so-called "dumb" movies inherently unfunny. But if you
are open to any comedy that might really make you laugh, and you used to like "Candid Camera", then you will probably like
this one. Unlike the original Jackass films, this one has a story line going through it, and even approaches moments of slight
poignancy, despite its over the top gross-outs and hilarious sight gags. The credits are a riot too, so don't turn it off too soon.
I've now seen it 5 times, with different people, and still laugh hard at some of the gags and situations. The young boy in it
is excellent, and while it is a definite "R", much of it is okay for older children who have seen many PG-13 films. This one has
no mayhem, violence, gunplay, or explosions. Just a lot of sexual innuendoes, and one scene in a black dance club that is
graphic. But plenty of poor taste, so be advised.

Ann SherryReviewed in the United States on December 6, 2015
5.0 out of 5 stars
Maybe Funniest Movie Ever
Verified purchase
As a long-time fan of Johnny Knoxville, I thought I was tired of him and that he had nothing new for me. It took a friend to email me the trailer for 'Bad Grandpa' who said she had seen it and found it so hilarious. We laugh at the same kind of stuff more or less. I cracked up at the trailer and immediately watched the movie. You know Johnny K always pushes the envelope as far as possible, and if I wasn't so ill right now I certainly would have been doubled over laughing practically thru the whole thing. Johnny disguises himself as an old man who is taking his grandson to live with his no-good father. All the people in all the places they drive thru don't know he's in disguise, so he and his 'grandson' are doing and saying these ridiculous things and people think it's all real. Their reactions are as good as Knoxville and the boy are. I could sit here and say this humor is below me and I didn't enjoy it. But everything is so over-the-edge, so unexpected, it's just all one big laugh with hardly a break in between. One of the funniest movies ever.

SkyReviewed in the United States on January 20, 2014
5.0 out of 5 stars
Lord Have Mercy
Verified purchase
Add an actual story to the infamous [[ASIN:B000IZ4R88 Jackass]] prank and dare shtick, and what you get is a geniously put together comedy that will have you laughing (and cringing) all the way through.

Bad Grandpa (Johnny Knoxville) is left with his grandson after the kid's mother walks out. So it's Bad Grandpa's job to haul the 8 year old kid across country to his father. While the scripted story is humorous enough on its own, it's the unscripted reactions of the people that they encounter along the trip that are as unforgettable as they are hilarious....And not just the reactions to Bad Grandpa's antics; Director Jeff Tremiane gets the child actor to pull off some hysterical, awkward and comically inappropriate shenanigans of his own. I'm guessing that the kid had a hidden earpiece and was getting fed lines as each live, real-life encounter developed, but who knows...maybe the kid is just a natural.

This movie is one of the best comedies I have ever seen. It's raw; it's silly; it's real; and for a short 90 minutes it will crack you up. Unless of course you are unfamiliar with the typical Jackass-type craziness; in which case your reaction to this movie might be more similar to the unsuspecting people that fall victims to Bad Grandpa in the movie.
See all reviews
Back to top
Get to Know Us
Make Money with Us
Amazon Payment Products
Let Us Help You
EnglishChoose a language for shopping. United StatesChoose a country/region for shopping.
© 1996-2022, Amazon.com, Inc. or its affiliates