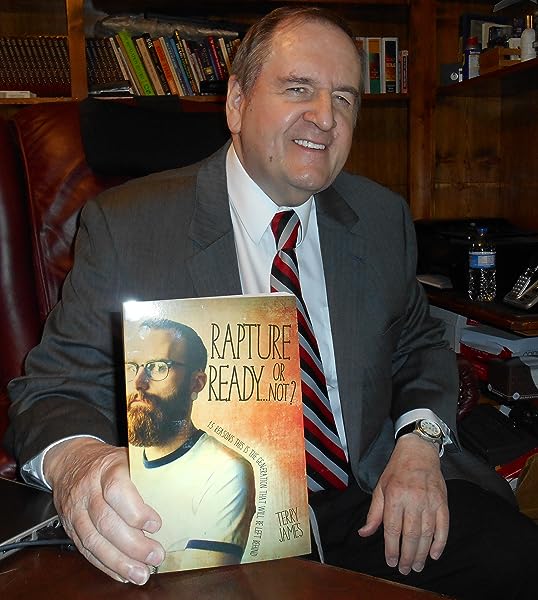 by Terry James (Author)
4.5 out of 5 stars 51 ratings
See all formats and editions
Sorry, there was a problem loading this page. Try again.

Paradoxically, Jacob's horrific circumstances dynamically unfold through a compelling love story of many dimensions. Jacob Zen ambitiously climbs toward a top position within the US government, only to have his plans explode into chaos. He reacts through computer technology with INterface, human-kind's ultimately evolved beast-state government of absolute control. Drug-induced flashbacks plunge him into that past time when there was yet hope--while life with Karen promised a future filled with great hope and expectation. When Jacob's life flies apart in one terrifying instant, events viciously sweep him toward a savage era beyond comprehension or endurance. He struggles mightily through his nightmarish world while powerful forces push and pull at him as he tries desperately to find Karen, the love of his life, who has been taken from him by the monstrous dictatorship. Yet other forces even more powerful influence his every thought, his every action, and propel him unerringly through the vortex of history toward some seemingly predetermined destination.A novel for those who want a fascinating look into the dawning millennium and beyond. A deeply intertwined mystery of international intrigue, clandestine geopolitical manipulations and murderous betrayals
Read more
Previous page
Next page

Terry James is author, general editor, and co-author of numerous books on Bible prophecy, hundreds of thousands of which have been sold worldwide. James is a frequent lecturer on the study of end time phenomena, and interviews often with national and international media on topics involving world issues and events as they might relate to Bible prophecy.

He has appeared in major documentaries and media forums, in all media formats, in America, Europe, and Asia.

He is an active member of the PreTrib Research Center Study Group, a prophecy research think-tank founded by Dr. Tim LaHaye, the co-author of the multi-million selling “Left Behind” series of novels. He is a regular participant in the annual Tulsa mid-America prophecy conference, where he speaks, and holds a Question and Answer series of sessions on current world events as they might relate to Bible prophecy.

Terry James has been blind since 1993 due to a degenerative retinal disease (retinitis pigmentosa). He uses the Jobs Accessible Word System (JAWS) –which is voice synthesis—to write and conduct business over the Internet.

His former profession was in public relations, advertising, marketing, and publicity and promotion.

He received his education from Arkansas Polytechnic Institute, Memphis Academy of Arts, and University of Arkansas at Little Rock.

He served in both corporate and government positions for 25 years, before becoming a full-time writer.

James also served in the United States Air Force from October 1966 through October 1970.) He served at Randolph AFB, Texas, in the T-38 section, a mission dedicated to training pilots in high-performance jet fighter-trainers.

Some of Terry James’ titles include:

• The American Apocalypse: Is the United States in Bible prophecy?, 2008,Harvest House Publishers

He is partner and general editor in the www.raptureready.com website, a site that is the attraction of national and international media, and was recently rated as the #1 Bible prophecy website on the Internet. The site has received attention from CBS, ABC, NBC, BBC, Time Magazine, The Rolling Stone, The New York Times, The Los Angeles Times, The Chicago Tribune, and many other broadcast venues and publications across America, and the world. James writes a weekly column for the site, Nearing Midnight, and contributes in-depth articles on a continuing basis.

Alissa Holmes
4.0 out of 5 stars Good book, makes you think!
Reviewed in the United States 🇺🇸 on December 19, 2021
Verified Purchase
This is a good book. You definitely have to be an intellectual person to read it though. The story will make you think. I will make mention that there is pretty much a such thing as interface.
Read more
Helpful
Report abuse

Steve McGill
4.0 out of 5 stars I enjoyed the book
Reviewed in the United States 🇺🇸 on January 24, 2020
Verified Purchase
The book deals with a period of time Christians should all be studying in earnest given the events in today's world. I thought the ending left a bit to be desired and the format was a bit hard to follow. Timely but not laid out so it was easy to follow. There were good references to scripture and a call to repentance that was a definite plus.
Read more
One person found this helpful
Helpful
Report abuse

katydid
5.0 out of 5 stars Strong read
Reviewed in the United States 🇺🇸 on May 12, 2020
Verified Purchase
This book's writer is pretty much genius as you are led through gritty raw emotions. A tale twisted and surprising.
Read more
Helpful
Report abuse

Kindle Customer
5.0 out of 5 stars Held my attention
Reviewed in the United States 🇺🇸 on July 16, 2020
Verified Purchase
Loved all the twist and turns in the plot
Read more
Helpful
Report abuse

S. Finnell
4.0 out of 5 stars Well researched
Reviewed in the United States 🇺🇸 on February 21, 2019
I enjoyed Jacob’s trouble. Having read a number of books of this genre, I especially enjoyed comparing them and this author has done a good job of blending scripture with his fictional account. He really hit the sin nature of man and the delusion of the mind.
Read more
2 people found this helpful
Helpful
Report abuse

jweenst56
5.0 out of 5 stars Troubles it is...for the whole world.
Reviewed in the United States 🇺🇸 on May 14, 2020
Lots of twists, confusion, betrayal and even joy in this one..Starts off in a deep and dark quandry. More fuzziness in a world thrown upside down by man's own horrible choices 😱🏃
But there is time for a change. Better hurry and decide who is in charge. Interesting perspective from this great author. 😎😄👍

Kindle Customer
5.0 out of 5 stars Very interesting
Reviewed in the United States 🇺🇸 on January 22, 2020
I thoroughly enjoy reading Biblical prophesy and this story has a totally different scenerio than most giving the reader for thought. No one human knows what will really happen but no matter what its definitely scary. This story is definitely worth reading and considering where you are in the scheme of things. Great job! Thank you! Now on to see if there's a sequel.
Read more
Helpful
Report abuse

Dave Johnson
4.0 out of 5 stars Not For the Faint of Heart....
Reviewed in the United States 🇺🇸 on December 9, 1999
Tim LaHaye and Jerri Jenkins can retire now. With such a huge interest in apocalyptic fiction these days (witness the 'Left Behind' series by the afore-mentioned authors, the popularity of shows like 'the X-Files', and movies like 'The Matrix' and 'End of Days'), this thriller should get alot of well-deserved attention. A politico-military world government that would scare Orwell and Huxley, lots of supernatural wierdness, and non-stop action set this novel a notch above the others.
Most fiction in this setting tends to follow the biblical book of Revelation so closely as to make it predictable, or it follows some convoluted idea of a quasi-spiritual new age. Both idea's make for cliche' reading at this point. Jacob's Trouble instead focuses on the life of a government operative, Jacob Zen, in his quest to make sense of the changing political scene around him and recover the life he once knew. The scenes buzz back and forth between past and present, taking you deep into the thoughts of Jacob as he agonizes over his lost girlfriend Karen. His determination to get her back and expose the truth leads him even deeper into danger and the workings of the new world order. This is definitly one of the most character driven books I've read in quite awhile. Although told in third person, you feel as if you're actually seeing a new, terrible world through the eyes of Jacob Zen. The author does an excellent job of casting Jacob's woes upon the reader, pulling you into his plight and searching for solutions.
The plot becomes increasingly deeper and more twisted as the book continues on, so if you're a casual reader- hang on! It's worth the ride.
I highly recommend this one for anyone into Clancy's D.C. novels, or King's futuristic horror (i.e. The Stand). If you're a LaHaye/Jenkins fan- you ain't seen nothin' yet.
Read more
6 people found this helpful
Helpful
Report abuse
See all reviews

Lesley A Shaw
5.0 out of 5 stars Gripping and terrifying vision of the near future
Reviewed in Canada 🇨🇦 on July 20, 2021
Verified Purchase
Whether you are a prophecy buff or just inquisitive about what the Bible says about End Times read this well-researched and well-written page turner. You won’t be disappointed!
Read more
Report abuse
See all reviews