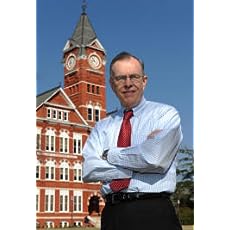 James R. Barth is the Lowder Eminent Scholar in Finance at Auburn University and a Senior Fellow at the Milken Institute. His research focuses on financial institutions and capital markets, both domestic and global, with special emphasis on regulatory issues. Recently, he served as leader of an international team advising the People's Bank of China on banking reform. Barth also participated in the U.S. Speaker and Specialist Program of the U.S. Department of State in China in 2007, India in 2008, Russia in 2009, and Egypt in 2010. Also in 2008, Barth spoke on "Competition in the Financial Sector: Challenges for Regulation" at the G-20 Workshop on Competition in the Financial Sector, Bali, Indonesia.

Barth was an appointee of Presidents Ronald Reagan and George H.W. Bush as chief economist of the Office of Thrift Supervision and previously the Federal Home Loan Bank Board. He has also held the positions of professor of economics at George Washington University, associate director of the economics program at the National Science Foundation, and Shaw Foundation Professor of Banking and Finance at Nanyang Technological University. He has been a visiting scholar at the U.S. Congressional Budget Office, Federal Reserve Bank of Atlanta, Office of the Comptroller of the Currency, and the World Bank.
Read more 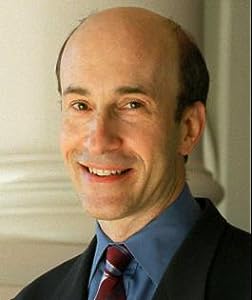 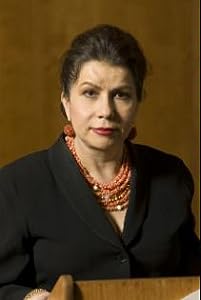 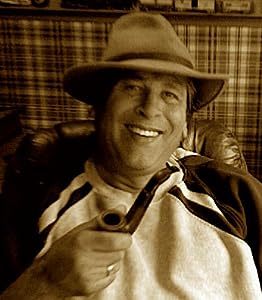 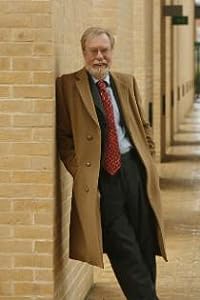 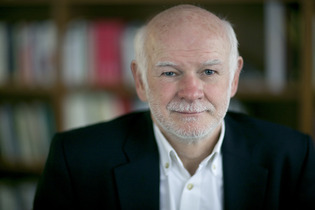 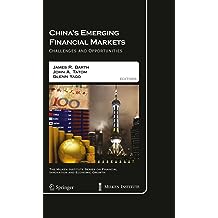 China's Emerging Financial Markets: Challenges and Opportunities (The Milken Institute Series on Financial Innovation and Economic Growth Book 8) Dec 2, 2009
by James R. Barth, John A. Tatom, Glenn Yago
$23.70
China’s emerging financial markets reflect the usual contrast between the country’s measured approach toward policy, regulatory, and market reform, and the dynamic pace of rapid economic growth and development. But they also offer unusual challenges and opportunities. In the past five years, the pace of opening and reform has accelerated sharply. Recapitalization and partial privatization of the largest banks, and the allowance of some joint venture and branch operations for foreign financial institutions, are making rapid headway in developing and expanding financial services and improving access to domestic business and households. This book provides the most extensive look available at the evolving Chinese financial system. It begins with alternative perspectives on the evolution of the financial system and the broad outlines of its prospects and potential contribution to economic growth. Three articles review broad aspects of the financial system. Franklin Allen, Jun ‘‘QJ’’ Qian, Meijun Qian, and Mengxin Zhao lead off with overviews of the banking system and performance of the equity market and other institutions.
Read more
Other Formats: Hardcover , Paperback 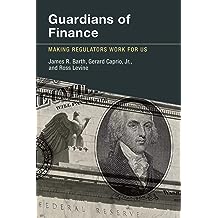 Guardians of Finance: Making Regulators Work for Us Feb 10, 2012
by James R. Barth, Gerard Caprio, Ross Levine
( 16 )
$15.99
How the unaccountable, unmonitorable, and unchecked actions of regulators precipitated the global financial crisis; and how to reform the system.

The recent financial crisis was an accident, a “perfect storm” fueled by an unforeseeable confluence of events that unfortunately combined to bring down the global financial systems. Or at least this is the story told and retold by a chorus of luminaries that includes Timothy Geithner, Henry Paulson, Robert Rubin, Ben Bernanke, and Alan Greenspan.

In Guardians of Finance, economists James Barth, Gerard Caprio, and Ross Levine argue that the financial meltdown of 2007 to 2009 was no accident; it was negligent homicide. They show that senior regulatory officials around the world knew or should have known that their policies were destabilizing the global financial system and yet chose not to act until the crisis had fully emerged.

Barth, Caprio, and Levine propose a reform to counter this systemic failure: the establishment of a “Sentinel” to provide an informed, expert, and independent assessment of financial regulation. Its sole power would be to demand information and to evaluate it from the perspective of the public—rather than that of the financial industry, the regulators, or politicians. 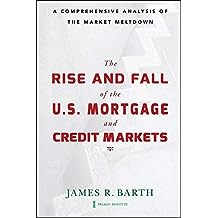 The mortgage meltdown: what went wrong and how do we fix it?

Owning a home can bestow a sense of security and independence. But today, in a cruel twist, many Americans now regard their homes as a source of worry and dashed expectations. How did everything go haywire? And what can we do about it now?

In The Rise and Fall of the U.S. Mortgage and Credit Markets, renowned finance expert James Barth offers a comprehensive examination of the mortgage meltdown. Together with a team of economists at the Milken Institute, he explores the shock waves that have rippled through the entire financial sector and the real economy. Deploying an incredibly detailed and extensive set of data, the book offers in-depth analysis of the mortgage meltdown and the resulting worldwide financial crisis. This authoritative volume explores what went wrong in every critical area, including securitization, loan origination practices, regulation and supervision, Fannie Mae and Freddie Mac, leverage and accounting practices, and of course, the rating agencies. The authors explain the steps the government has taken to address the crisis thus far, arguing that we have yet to address the larger issues.

The Rise and Fall of the U.S. Mortgage and Credit Markets analyzes the factors that should drive reform and explores the issues that policymakers must confront in any future reshaping of financial market regulations. 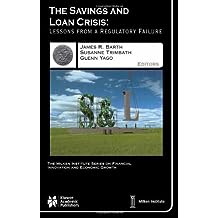 The Savings and Loan Crisis: Lessons from a Regulatory Failure (The Milken Institute Series on Financial Innovation and Economic Growth Book 5) Apr 11, 2006
by James R. Barth, S. Trimbath, Glenn Yago
( 1 )
$149.00
Robert L. Bartley Editor Emeritus, The Wall Street Journal As this collection of essays is published, markets, regulators and society generally are sorting through the wreckage of the collapse in tech stocks at the turn of the millennium. All the more reason for an exhaustive look at our last “bubble,” if that is what we choose to call them. We haven’t had time to digest the lesson of the tech stocks and the recession that started in March 2001. After a decade, though, we’re ready to understand the savings and loan “bubble” that popped in 1989, preceding the recession that started in July 1990. For more than a half-century, we can now see clearly enough, the savings and loans were an accident waiting to happen. The best insurance for financial institutions is diversification, but the savings and loans were concentrated solely in residential financing. What’s more, they were in the business of borrowing short and lending long, accepting deposits that could be withdrawn quickly and making 20-year loans. They were further protected by Regulation Q, allowing them to pay a bit more for savings deposits than commercial banks were allowed to. In normal times, they could ride the yield curve, booking profits because long-term interest rates are generally higher than short-term ones. This world was recorded in Jimmy Stewart’s 1946 film, It’s a Wonderful Life.
Read more
Other Formats: Hardcover , Paperback 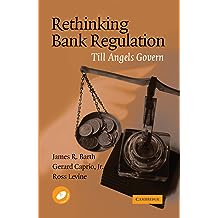 Rethinking Bank Regulation: Till Angels Govern Dec 26, 2005
by James R. Barth, Gerard Caprio, Ross Levine
( 4 )
$36.00
This volume assembles and presents a database on bank regulation in over 150 countries (included also on CD). It offered the first comprehensive cross-country assessment of the impact of bank regulation on the operation of banks, and assesses the validity of the Basel Committee's influential approach to bank regulation. The treatment also provides an empirical evaluation of the historic debate about the proper role of government in the economy by studying bank regulation and analyzes the role of politics in determining regulatory approaches to banking. The data also indicate that restrictions on the entry of banks, government ownership of banks, and restrictions on bank activities hurt banking system performance. The authors find that domestic political factors shape both regulations and their effectiveness.
Read more
Other Formats: Hardcover , Paperback , Digital 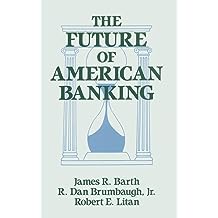 The Future of American Banking (Columbia University Seminars) Sep 16, 2016
by James R. Barth, Robert E. Litan, R.Dan Brumbaugh
$24.95
The future of American banking is in doubt and the industry and the federal insurance fund that helps support it are in turmoil. The ingredients of the turmoil have been simmering in public view since at least the early 1980s when commercial bank loans to lesser developed countries (LDCs) began to default. The difficulties began to boil at the end of the decade when the prospect first arose that the banks' deposit insurer, the Bank Insurance Fund (BIF) that is administered by the Federal Deposit Insurance Corporation (FDIC), might require dollars to resolve bank failure as occurred in the savings and loan debacle. This book frames the major economic and policy issues raised by the banking crisis whose resolution largely determines the future of American banking. It focuses on the current reported condition of the banking industry, concentrating on large banks in particular. A longer-run economic prognosis for the banking industry is presented and the implications of future bank failures for the financial services sector and federal regulatory policy are discussed. Most importantly the book contains suggestions for changes in the nation's deposit-insurance system and accompanying banking laws. These changes would reduce the federal government's deposit insurance liability and would provide banks with potentially profitable opportunities. The study includes a wealth of data on the financial condition of American banks and the system as a whole, some of it not easily obtainable from any other source. The authors are internationally recognized as knowledgeable experts on the state of the American banking system and the options and prospects for US banking reform.
Read more
Other Formats: Hardcover , Paperback 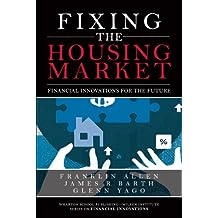 Ever since the ancient Greeks, financial innovation has enabled more people to purchase homes. Today is no different: in fact, responsible financial innovation is now the best tool available for "rebooting" crippled housing markets, improving their efficiency, and making housing more accessible to millions. In Fixing the Housing Market, three leading experts explain how, covering everything decision-makers should know about today’s housing and financial markets.

The authors first explain how innovative housing financial products, services and institutions evolved through the 19th century, World War I, the Great Depression, World War II, and beyond -- culminating in the post-1970s era of securitization. Next, they assess housing finance systems in mature economies during and after the recent crisis, highlighting benefits and risks associated with each widely-used mortgage funding structure and product. They also carefully assess current housing finance structures in emerging economies such as Brazil, Russia, India, and China.