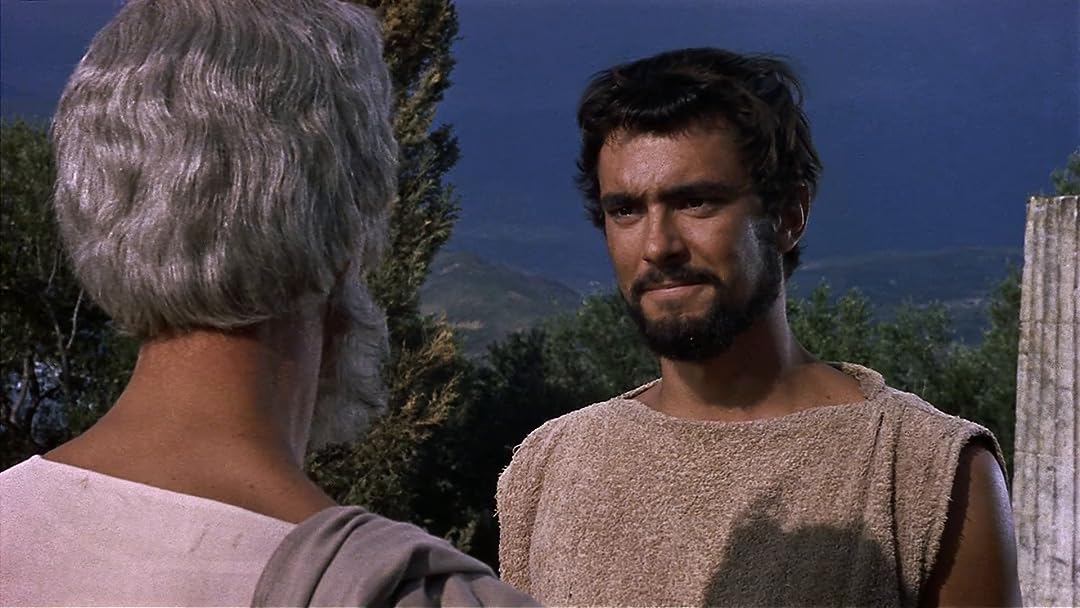 Jason And The Argonauts

(2,066)7.31 h 43 min1963X-RayG
The classic fantasy tale of the fearless sailor who must find the Golden Fleece before he can claimhis throne.

Amazon CustomerReviewed in the United States on March 6, 2017
5.0 out of 5 stars
...And is the object to *hit* it, or pass it...
Verified purchase
I've loved this film since I first saw it as a kid. I'll grant that the special effects are dated - but for it's time, this was magic brought to life on the big (and little - TV) screen. The excellent animation of the various creatures still remain (in my opinion) as one of the greatest testaments to the late Ray Harryhausen's legacy (my favorite being Talos - the man of bronze). The music score is near perfect for the storyline, making this film seem on a par with the best epics (it's not, but that's possibly due to it being a fantasy - as opposed to historical fiction).
This is definitely family fare - and older parents (who were kids when it came out) can probably still appreciate it as much, if not more, than children viewing it for the first (or second, or 50th) time. The plot isn't too complicated. There is no sex or gore. Humor is mixed with tragedy - like in the case of Hylas. A definite must-have for fantasy fans, filmmakers, and anyone who enjoys a great adventure film.
23 people found this helpful

Bruce HolroydReviewed in the United States on June 9, 2019
5.0 out of 5 stars
The one motion picture that is considered Ray Harryhausen's MASTERPIECE!
Verified purchase
One of the best mythological fantasies ever made! A perfect showcase of the incredible magic created by stop-motion wizard, Ray Harryhausen! Some of his most memorable creatures are here: the hideous, demon-like Harpies, the towering magnificence of the living bronze God-statue, Talos, the slithering, hissing guardian of the coveted Golden Fleece, the seven-headed Hydra... and Harryhausen's most famous animation sequence, the 'undead army' of living skeletons! Greek mythology has never held as much spectacle as this... in what many consider Ray Harryhausen's crowning work: "JASON AND THE ARGONAUTS!"
9 people found this helpful

Jerry H. NeillReviewed in the United States on August 23, 2016
5.0 out of 5 stars
Fan Boy Cult Classic YES!
Verified purchase
Fan boy cult classic. Saw this at the movies when I was very young and was fascinated by it. Went with my big brother and his buddies to the show.. I had to sleep in his bed that night because the "skeleton army" gave me nightmares. 50+ years later this popcorn movie still holds up.The stop motion Ray Harryhausen effects are incredibly creepy because they were jerky and strange which made it even more scary.
13 people found this helpful

Bruce G. TaylorReviewed in the United States on October 11, 2010
4.0 out of 5 stars
Superb Movie But Blu-ray Exposes the Flaws
Verified purchase
First of all I have to say that I've been a fan and admirer of Ray Harryhausen's work for many years and "Jason and the Argonauts" is, in my opinion, his finest color film. I saw this grand old picture a few times when it was first played in theaters and I got the original DVD when it first became available. The Blu-ray release of this picture is a perfect example of how revealing the Blu-ray system is.

Shots which do not contain special effects involving double printing or blue screen procedures have razor sharpness that is immediately apparent. The scenes with special effects: Talos, the Hydra, the sword-fighting skeletons, etc. divulge, quite obviously, a loss in clarity resulting from the double printing required for these effects. These differences are not nearly so apparent in the standard DVD release simply because the standard DVD process cannot convey the ultimate clarity available with Blu-ray. As I see it the only way these differences could have been minimized would be for Harryhausen to have used something like VistaVision to produce the negatives involving special effects and double printing. The large negatives produced by the VistaVision process could have minimized the loss in clarity in the subsequent reprinting. But this would probably have added considerable costs to an already fairly high budgeted movie for its time.

But I'm not being negative on the Blu-ray release of this classic at all. Blu-ray is a system that provides more technical information about the film you are watching and as the saying goes, you have to take the bitter with the batter. In the scenes with the animated skeletons combined with the live actors, for example, you immediately see that the skeleton figures have greater clarity than the live actors in the same frame as a result of the double printing required for Harryhausen's process.

The Blu-ray release also has a higher level of audio quality than the standard DVD, which provides added richness to Bernard Herrmann's excellent score. All in all, a fine presentation of this tremendously entertaining picture.

Charles StembridgeReviewed in the United States on July 10, 2013
4.0 out of 5 stars
Best Harryhousen effects
Verified purchase
One of the best of the movies with Ray Harryhousen's Dynamation special effects. The Greek myth(s) about Jason were pretty well represented, in other words a great story. I only downgraded it from 5 stars to 4 because the story 'just ended' with Jason and the heroine sailing off into the sunset. Does Jason even get back home to Thessaly? How does he even get back through the Clashing Rocks on his way back? Does he finally confront the usurper-king, and win back his kingdom? In the original myths he does, but the movie's end leaves you guessing. Including an actual (or Hollywood) ending to the story might have added as much as 30 minutes to the movie, but since Jason encountered no more monsters on the way back, there was not much for Harryhousen to do.

As an aside, for those of you who might be wondering just where the 'Clashing Rocks' were located, I looked it up for you. The actual location is the Bosphorus - that very narrow strait between the Sea of Marmara (Constantinople) and the Black Sea. Colchis was said to be somewhere on the Southern shore of the Black Sea. Just to avoid any confusion, the Hellespont (now the Dardanelles) is the narrow strait between the Aegean Sea (Greek side) to the Sea of Marmara. Troy was supposed to be located at the entrance to the Hellespont.

It is also said in myth that floating rocks known as the Symplegades or Clashing Rocks once crushed any ship that attempted passage of the Bosphorus until the hero Jason obtained passage, whereupon the rocks became fixed, and Greek access to the Black Sea was opened. Now you know how Jason avoided being crushed on his way back to Thessaly.

History and myth aside, this movie is one of the best of Harryhousen's efforts, told a great story in only 101 minutes, and is therefore highly recommended. The more recent re-makes of the Jason story, as well as the Perseus vs. the Gorgon myth (Clash of the Titans) have better effects (at least more modern), but their stories just don't hold together as well.
10 people found this helpful

MichaelReviewed in the United States on August 11, 2011
4.0 out of 5 stars
Harryhausen at his best
Verified purchase
This is no great film in terms of plot execution or dialogue or acting. But this movie is still an amazing piece of craftsmanship. Made on a low budget, even for the time, it is visually amazing. A giant bronze statue comes to life. Harpies torment a man and are captured. The hero fights a multi-headed hydra. And a climactic battle with undead skeletons. All without any computer work at all. No computers were used to make this film. And while the special effects might seem a little dated in this day and age of polished digital CGI beasts and worlds, they still work. I still have seen every little in modern films that impresses me as much as the work done on the giant bronze Talus in this film.

The blu-ray transfer of this film is really well done. It's clean and not at all grainy. This film also comes with a pair of commentaries. The one with Ray Harryhausen and film historian Tony Dalton is good. The one with Peter Jackson and Randall Cook is good at first, but unfortunately they begin to start talking about other Harryhausen films and spend as much if not more time talking about the Sinbad films as they do about "Jason and the Argonauts." Scenes where I wish they were commenting on the action on screen they spend talking about how much they prefer "The Seventh Voyage of Sinbad." Which is a fun film, but not what I want them to talk about when I'm watching "Jason and the Argonauts."

Anyway, this film is entertaining as spectacle, and it looks wonderful in the blu-ray format. It is even child friendly, if your child can handle fantasy and skeletons. There is no gore, and the closest it gets to overt sexuality is a scene of Nancy Kovack dancing while painted gold. So buy it and watch it with your family.
10 people found this helpful

M. BurnsReviewed in the United States on December 27, 2017
4.0 out of 5 stars
Useful teaching tool
Verified purchase
As a movie, it is what it is - effects were cutting edge at the time, and the acting, writing and direction are all incredibly dated. However, as a teaching tool for Greek mythology and its contemporary vs modern reception, it's awesome. Four stars only because it's a little painful for classicists to watch :)
7 people found this helpful
See all reviews
Back to top
Get to Know Us
Make Money with Us
Amazon Payment Products
Let Us Help You
EnglishChoose a language for shopping. United StatesChoose a country/region for shopping.
© 1996-2021, Amazon.com, Inc. or its affiliates