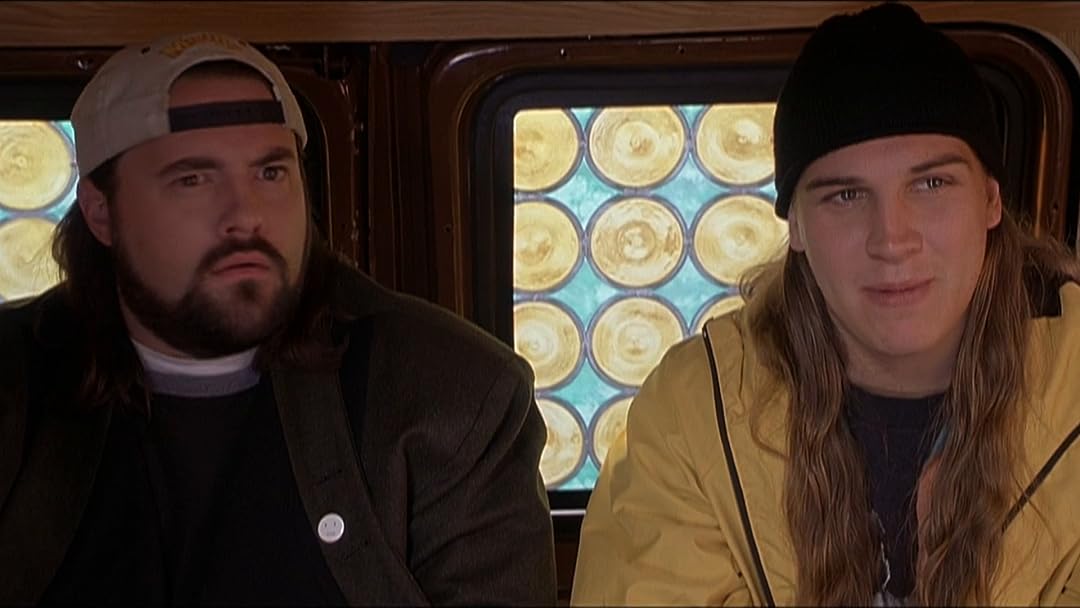 Jay and Silent Bob Strike Back

Obi WanReviewed in the United States on August 20, 2018
5.0 out of 5 stars
If you love Kevin Smith's other Jersey movies, this is a must see
Verified purchase
If you've never seen Clerk, Mallrats, or Chasing Amy (The Jersey Trilogy) there is no point in watching Jay and Silent Bob Strike Back. You won't get the jokes. You will be totally lost. And it will look stupid.

But if you've familiar with the Jersey Trilogy then Jay and Silent Bob Strike Back is essentially a 90 minute inside joke referencing those films. (And to a minor extent, to Dogma as well)

It's crude as can be. (It focuses on Jay and Silent Bob. What are you expecting? Gone With The Wind?)

This is a stupid movie. Make no mistakes. This is not to be taken serious AT ALL. It is insanely dumb. And it's wonderful as a result! EVERYTHING in the film is satire or a caricature of either a person or group of people. EVERYTHING.

This is a must watch for fans of Clerks and Mallrats. It even pokes fun at how Chasing Amy didn't hold up over the years.

EricReviewed in the United States on June 25, 2020
3.0 out of 5 stars
The view is askew
Verified purchase
This was one of my top 5 favorite movies in the early 2000s while I was a teenager. Now that I'm in my 30's, this movie has not aged or matured nearly as well. There's a lot of sexist and misogynistic tropes, dynamics, and dialogue. All those wild, hilarious things Jay used to say... just seems f'n off, like someone who is far removed from stoners idea of what stoners are. Some jokes still hit, but don't expect to last your ass off the way you used to. Still better than the remake. I still recommend the Clerks series as Kevin Smith's best work.
2 people found this helpful

WC138Reviewed in the United States on October 24, 2018
2.0 out of 5 stars
Fan Service: The Film
Verified purchase
In a film that's little more than fan service to Kevin Smith's core audience, we get the same tired jokes replayed for what little laugh value they can be flogged for. Formerly interesting characters are reduced to one note call-backs, and what's left is a poor man's version of a Cheech and Chong script stolen from a dumpster behind the lot.

Keep an eye out for Smith's idea of "sexy cat-burglar's," and his attempt to bizarrely shoe-horn his wife into the group of 20 something Hollywood "it" girls of the time.

It's lazily done, and bottom of the barrel. Even compared to Clerks 2.

JerTerReviewed in the United States on May 27, 2021
5.0 out of 5 stars
I dedicate my life to this movie…
Verified purchase
You know when you can’t find anything to watch you usually go back to something you’ve watched before? Yeah this movie is my bible. I put it on when I have a long drive. I have it downloaded to my phone so when I am staying at a hotel with no WiFi I have something to watch. I quote this movie on a day to day basis. If I was stranded on a island I would have this movie and a DVD player and I would be set. ALL AND ALL AS A OVERALL MOVIE…it’s alright :/

Michael DeatonReviewed in the United States on February 1, 2016
5.0 out of 5 stars
Off the chain funny, and a real poke in the eye at Hollywood. And Chris Rock..... Rocks
Verified purchase
These two wild and crazy guys are so totally underrated, This is a beautiful follow-up to their other off the wall, funny movies that they have made. I consider Jay the funnest white dude on Earth since John Belushi..... really///... so off the wall funny. Also, Silent Bob maintains his perfect character with the Charlie Chaplin routines (but does break the silence at perfect times), Great silent actions,,,,... so cool.

And Chris Rock's work is unreal.... Silent Bob acknowledged that his performance was totally and absolutely unscripted (as the Director, Bob was smart enough to just turn Chris loose and let him go), just spur of the moment off the wall banter. Toooooooo Funnnny . Ride on Rock, no you are Da Man.

Also the great cameos by Ben Affleck and Matt Damom are fantastic .So spoof... and crazy. And as a bonus....there are so many well known actors they are too many to mention.

R. PowellReviewed in the United States on November 8, 2015
5.0 out of 5 stars
Jay and Silent Bob rock!
Verified purchase
Jay and Silent Bob rock the house with Jay and Silent Bob Strike Back....this film rocks big time. The chemistry between Jay and Silent Bob is excellent . They play off of each other so well that I am very surprised that they are not in more movies together. This is a comic geek's film with so many laughs in it that I literally split my sides laughing. The title characters are on a revenge road trip to stop a movie about them from being made and on the way they encounter even more bizarre characters even more bizarre than themselves if that's possible.This a Kevin Smith Universe film about characters created by Kevin Smith ( Silent Bob) himself.The acting is just as excellent as the humor running through every minute of the film. Watch this film once and it will not be enough. I highly recommend this film for its raw humor and laughs, you will not be disappointed.
One person found this helpful

Derek StephensReviewed in the United States on September 7, 2018
5.0 out of 5 stars
Error within Continuity Error negates itself
Verified purchase
Just want to clarify a mistake that actually ISN'T a mistake in the movie. It's said in the scene where Sean William Scott grabs Justices' leg, he reaches for her leg with his right hand but his left hand is shown to be on her leg. That is untrue. His right arm moves forward to grab the neck of the guitar in his lap so as to not drop it, but you can clearly see his left arm extend further than his right arm in relation to horizontal grade comparison between upper arms.
One person found this helpful
See all reviews
Back to top
Get to Know Us
Make Money with Us
Amazon Payment Products
Let Us Help You
EnglishChoose a language for shopping. United StatesChoose a country/region for shopping.
© 1996-2021, Amazon.com, Inc. or its affiliates