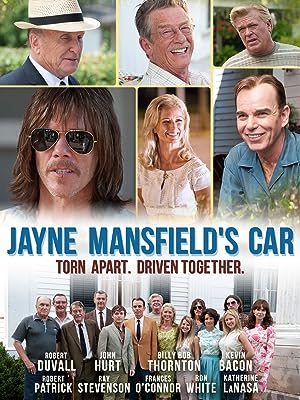 Daniel B.Reviewed in the United States on April 15, 2014
5.0 out of 5 stars
Not for Everybody, but I loved it.
Verified purchase
I thought this was a really interesting movie. Echoes of World War II (and even a bit of WW I) in the Vietnam era. A couple of scenes were a little over the top (e.g., the part during Duvall's hilarious encounter with LSD where the shotgun came out), but if you like eclectic movies laced with dark humor (and aren't bummed out by the salty language that peppers this film), you'll probably like this as much as I did. If you liked the British production of "Death at a Funeral", for example, you'll love this one. Excellent cast (Robert Duvall, Billy Bob Thornton, Kevin Bacon, Ron White) and at times they captured 1969 as well as any movie I've seen about that era ever has. As my title says, this movie won't be for everybody, but I think those who like dark comedy will most likely find it to be tremendously entertaining.

I rarely watch the same movie twice, particularly if I've seen it in the fairly recent past, but I recently saw "The Judge", and after recognizing the many parallels between "The Judge" and this movie, I wanted to see this one again. I watched it for the second time last night and appreciated it even more. I enjoyed it far more than "The Judge" and consider it to be a superior film to "The Judge". The performances of the entire cast of "Jayne Mansfield's Car" - from Robert Duvall and Billy Bob Thornton to Kevin Bacon and Ron White - were outstanding. Virtually every scene is interesting in its own right and a few of them - make that many of them - are absolutely hilarious. Billy Bob Thornton's performance should have garnered him at least an Oscar nomination for best supporting actor.

I've upgraded my rating from 4 to 5 stars. This is a fantastic movie for those who appreciate the genre.

BobboReviewed in the United States on May 12, 2015
5.0 out of 5 stars
Wonderful ensemble piece
Verified purchase
I love a good ensemble film, where acting and writing rule the day. Films like"Rambling Rose" and "The Big Chill" win my heart fair and square, and here's another one. It's tempting to discuss this in detail, but that would involve spoilers. I don't do spoilers, so suffice it to say this. A brilliant ensemble cast takes a story of two deeply dysfunctional families, one southern USA, one British, unites them through the death of a mostly unseen character, and the sparks fly. I love Robert Duvall; he is ever a poet, and nowhere more than in this flinty turn as the patriarch of the southern family. Robert Patrick is steely as a father who takes after his own. Kevin Bacon gives a performance of immense strength and sympathy as the son who has rebelled against family values. John Hurt brings to the role of the British father channels of darkness that reveal themselves only gradually, and in remarkable ways. We are not so different. The film takes place in 1969, the height of the Vietnam conflict and a time of schism in America that would not be seen again until the present day. While the actual time is less relevant than those who live it, it presents a fine battleground for three generations of war wounded. It explores questions of love and attraction, of pain and bandages, of loyalty and family, and much more. I can't be more specific without doing a disservice to a fine and surprisingly warm- if spiky - work by Billy Bob Thornton, who both directed and co-wrote a scrappy ode to how we define ourselves by our pain. I can't recommend this film highly enough, except to say I watched it on two successive nights and was delighted both times, and that after the first viewing I dreamed about some of the characters. ***** bobbogoldberg 1/13/14
3 people found this helpful

Don Diego VegaReviewed in the United States on July 7, 2018
4.0 out of 5 stars
Deep. Meaningful. Well done.
Verified purchase
Deep meaning. Serious film. Amazing cast. Great casting. Very well written rural American Southern story. Well done.
A number of family members come together. Various elements affect their internal makeups, but most of all, war; it’s affects on several generations of men (including their relatives by marriage). Also, there are slight social changes in their habits and communication with each other which are caused by their having interacted over the course of a painful few days.
The dvd is good quality; the image, the audio are fine. There is a very short but enjoyable behind the scenes video accompanying the film. The actors each acknowledge the impressive casting, and well written script. They express that they are privileged to have worked on this project. And they’re were.

Cat LoverReviewed in the United States on November 18, 2014
5.0 out of 5 stars
Jayne Mansfield's Car
Verified purchase
This movie is a sleeper, we had happened across it by accident and were completely taken by surprise. Had to purchase it and watched it many times already. There are sad emotional elements to this movie along with a lot of humor.

Billy Bob Thornton never ceases to amaze me with his talent along with Robert Duvall and all the other actors/actresses. This movie will make you see what war has done mentally/emotionally to these soldiers of the era and will almost make you cry, but will also make you laugh.

Don't want to give much away because this movie is a must see. But listed are some key points.
Viet Nam era, mental/emotional issues with 3 brothers
A father (Robert Duvall) obsessed with vehicle accidents and his ham radio.
A sister married to an alcoholic car dealer salesman.
The ex-wife's English husband and family who brings her body to America for burial; meeting the American family.
Takes place in the South.
Jayne Mansfield's car on display for all to see.

I think it's time to watch it again!
4 people found this helpful

Melanie WillardReviewed in the United States on October 5, 2017
5.0 out of 5 stars
Strange obsessions
Verified purchase
I love this movie and can't get enough of it. An alternate title could have been "strange obsessions", but this title represents the complete wreck that is this family. I have lived my whole life in Alabama and so many things are spot on, from the "favorite spot in the woods for parking and hunting " to the politics and conflicting feelings about family and religion and the sexual repression/revolution which can only lead to dysfunction in all these areas. It isn't for everybody, but after "giving it a chance", I must add it to my favorite movie list. Certainly better than anything made in the last 5 years with their contrived and politically "policed" social themes, which I have given up on watching.
SO glad I found this one!

Sony_XLReviewed in the United States on October 28, 2015
3.0 out of 5 stars
nothing ever came
Verified purchase
I love Duvall, and enjoy most things with BBT, but this one let me down. Many unexplained character back stories, none of the adults were happily married, and aside from that, it appeared that no one had a job, yet they could afford to live in this beautiful antebellum mansion with a maid, numerous cars and a swimming pool. Also, the characters' ages seemed off for the time period, i.e. the movie took place in 1969, and the 3 sons were all veterans of WW2 25 years earlier - they didn't look old enough, especially Bacon. I was disappointed in this movie, was hoping for something as good as Slingblade. I would have turned it off but I just kept thinking there would be some redeeming plot twist or character development, but nothing ever came.
One person found this helpful

Kit MarloweReviewed in the United States on September 21, 2020
5.0 out of 5 stars
Suberb.
Verified purchase
This movie is a precious jewel. It is funny, and it gives real insights, if via hyperbole, into what can go on, and wrong, between fathers and sons. Thornton is a great actor, and there are several others in the cast who are nearly his equal. Evidently Thornton is also a very fine writer and thinker. At times the dialogue is literary.

dhartReviewed in the United States on June 14, 2014
4.0 out of 5 stars
something different
Verified purchase
A slow paced character study movie centered around a Southern family and their mother's second family, a English family, coming together around her funeral. It also deals with how war affects three different generations of the family. Long, but interesting. It isn't an action film and other than looking at the damaged car once in the film, has nothing to do with Jayne Mansfield's car. It does have some good subtle acting by several members of this ensemble of well known stars. Not everybody's cup of tea, but I enjoyed it.
2 people found this helpful
See all reviews
Back to top
Get to Know Us
Make Money with Us
Amazon Payment Products
Let Us Help You
EnglishChoose a language for shopping. United StatesChoose a country/region for shopping.
© 1996-2022, Amazon.com, Inc. or its affiliates