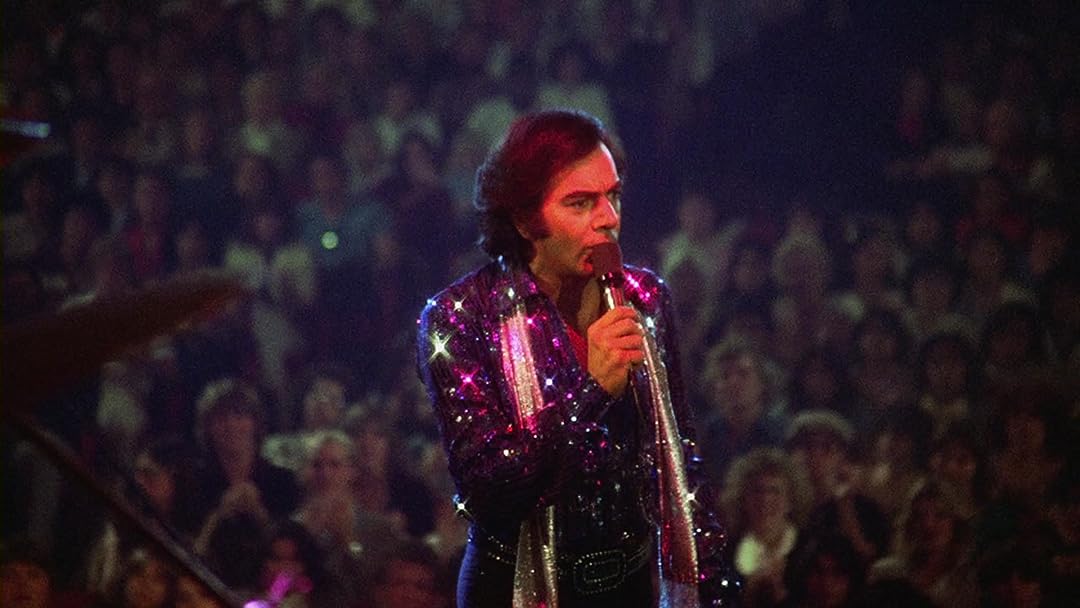 (3,573)1 h 56 min198013+
Neil Diamond adds his own distinctive sounds to the classic role of a young Jewish cantor on the verge of a dream. It's the story of a man who forsakes the synagogue choir for a chance at rock superstardom. Defying his father, he turns his back on his marriage and community to team up with his new manager, Molly.

ShaniAZReviewed in the United States on March 15, 2017
5.0 out of 5 stars
A beautiful depiction of American life that will be important for understanding our history
Verified purchase
I love this movie. I saw it for the first time when I was a teenager, and something about it has always been with me. I'm now 51, and I've come full circle in my life; the teenage me watching a Neil Diamond who seemed "old" and intimidating, to the adult me admiring how impossibly handsome Diamond looks throughout the film. I have read reviews that suggest the storyline was "dated" even in 1980. Well, let me tell you, it's 2017, and the theme of forbidden love is just as poignant now as at any time in humanity's history. This film shows Americans who are serious about their responsibilities in their roles in life. The characters expect to have to make huge sacrifices for overall good. Having the courage to make sacrifices, at the expense of those most-loved, is not necessarily admirable. Jess, in a sense, is a portent of the Selfishness we take for granted in current culture. Now, audiences would likely perceive the father and and first wife as the "selfish" ones; standing in the way of a "dream". Jess, however, is never unburdened by his choices, and his penitence on Yom Kippur is needed to begin to right the wrongs. Even after experiencing a world so unlike the predictable, stable New York society of his youth, Jess is able to return to what is "right" as a son, and as a new father.

As a teenager, I rolled my eyes at the scenes depicting religious life, understanding the frustrations of Jess. Now the scene where Diamond instructs a bar mitzvah candidate singing Hine Ma Tov, brings me to tears. I all-out cried during the scene where Jess teaches Molly the Shabbat Blessings. There is so much love and respect shown; so much honor for the mysteries of spirituality and tradition. When I saw the film in the '80s, the character of a Cantor living an Observant life seemed quite incongruous for the sex symbol-rock star Neil Diamond from the radio. I remember being surprised (and delighted) watching him break into Hava Nagila a cappella, and I found it so strange to hear that iconic, powerful "radio" voice singing Kol Nidre. Neil Diamond has taken quite a lot of criticism over the years, for recording Christmas albums, and singing "racy" songs...lol. Listening to him could be considered a "guilty pleasure" depending on the crowd you were with. But the character of Jess is so candid, humble, and real, it's impossible not to see beauty in this struggle between the sacred and ordinary life. Neil Diamond is completely lovable and adorable in the role.

Having lived most of my life in Southern California, I was very touched by the scenes of how it used to be...rustic, adventurous, exotic. It's so different from the polished, overcrowded real estate empire that it has become. California nostalgia was a surprise for me, in this movie. I could not have imagined how much it would change, or the ways it changed.

My middle-aged self applauds Diamond for being open-minded long before it was necessarily acceptable. I'm sure Diamond didn't have to take the role in this movie. Instead, he plays the part as though it's autobiographical, and he exudes an unshakeable, strong Jewish-ness that is, frankly, timeless.

The soundtrack is delightful, of course!

Albany RoseReviewed in the United States on May 27, 2019
5.0 out of 5 stars
Beautiful movie! Wonderful music!
Verified purchase
The movie was superb in everyway. The acting, script, and music were all excellent. I love Neil Diamond as a musician, singer/songwriter but he was excellent as an actor in this film as well. Luci Arnez and Lawarence Oliver were excellent also. The soundtrack alone is worth watching the film.

Back in the summer of 1968 my sister took me to see Neil Diamond on my 16th birthday. We had seats on the front row in this small Louisville, KY venue. I remember enjoying the heck out of watching him perform and listening to his music.My sis and I was so enthralled that we both gasped at the same time when Neil moved in leg in some exciting fashion. Those were the good ol days for sure. I loved watching this movie and seeing him making those moves again. :) He's a lot older now and so are we. However, I'm still enthralled by Neil Diamond! He's got the moves, baby!
18 people found this helpful

Army MomReviewed in the United States on July 28, 2016
4.0 out of 5 stars
Insightful and thought provoking
Verified purchase
I don't understand the reviewers who have criticized Neil Diamond's performance. Yes, Sir Laurence Olivier is brilliant. Oh my goodness, his performance is pure genius, as always. But Neil Diamond does well, I think, as the troubled young man who struggles to be true to his entire self: the self who has something to say through his music, and the self who deeply loves his father and his heritage and doesn't understand why they have to be mutually exclusive. His reactions and soul searching "road trip" are natural to anyone who finds that it is more difficult than we thought it would be to fulfill our potential with any joy when the cost of doing so becomes higher than we can bear. I like the insightful story, how he stays true to himself, and I like how he handles the resolution. Plus there is the extra enjoyment of the variety in Neil Diamond's performances, from the unsure first-timer to the confident artist. Give it a chance.
43 people found this helpful

SanandaReviewed in the United States on July 15, 2016
4.0 out of 5 stars
Worth the Watch
Verified purchase
This is, of course, a remake of the Al Jolson story...told in the Jewish backdrop of New York's Jewish community. The music, written and sung by Neil Diamond is among the best he has done and include his hit song "America" and "Hello Again". The critics panned this movie which only ensured that I would like it. It helps if you like Diamond's music to start with since the story line is a little on the weak side, but I don't watch movies for analysis...I watch them for entertainment.
28 people found this helpful

joel wingReviewed in the United States on February 20, 2021
2.0 out of 5 stars
Too melodramatic and unrealistic
Verified purchase
The Jazz Singer featuring Neil Diamond was another adaptation of the 1925 play about a young Jewish man who defies his family and tradition to become a pop singer. Diamond is a cantor in training to his father played by Laurence Olivier in New York City but then he gets a chance to become part of the music business when his friend played by Franklyn Ajaye asks him to come out to Los Angeles to do some recordings. The problem with the movie is that they made the story far too melodramatic and unreal too many times.

The movie gets off to a good start and then starts falling off the tracks. Diamond’s second show in Los Angeles for instance is with a full orchestra at a big theater seating several hundred. He doesn’t even have a record contract or money but somehow he gets this huge show. Another time he goes to party with his friends and busts out with a country-folk tune. It seemed really forced just to put in another song for the movie. Then Diamond gets upset over his father disowning him for being an entertainer so he takes off, abandons his car in what looks like the middle of the Nevada desert and then hops on a bus for Texas. Really??? Of course Ajaye shows up and brings him back to LA so the story can be completed.

What the movie does a better job with is how getting into the entertainment business can change people. Diamond for instance breaks up with his wife and gets a new girlfriend.

Sharron CrandellReviewed in the United States on November 17, 2019
5.0 out of 5 stars
-:¦:-•:*'"*:•.-:¦:-•* FABULOUS * -:¦:- * HIGHLY RECOMMEND -:¦:-•:*'"*:•.-:¦:-
Verified purchase
I am 73 and fell in love with Neil Diamond in the early '60's when he came out with "Solitary Man" and have loved him as a songwriter, entertainer, and singer ever since. I have purchased every album he has ever done and been to 11 concerts within a 150 miles from where I live. His acting chops are not his long suit but he makes do with the incredible music he wrote and sang in this film. Yes, the story has been redone but who cares? A Star is Born is on its 3rd remake. I went to see this movie in 1980 - the day it hit theaters - loved it then and love it still. It's no Academy Award material but the actors are decent, story line timeless, and soundtrack amazing. This is well worth the watch if you are a fan of his. He never disappoints.
5 people found this helpful

William JurgensReviewed in the United States on June 3, 2019
4.0 out of 5 stars
It's character driven, not an action picture. You need to understand the characters motivation.
Verified purchase
Well, I believe this is the third version of this story. The first was with Al Jolson in 1929, and for movie history trivia buffs, I believe was the first talking picture. The second was with Danny Thomas in the 50's, and now we have this one. I did not see this back in 1980, probably since it was so universally panned. I know Neal Diamond was criticized for his acting. Olivier was criticized for even going hear it and so on. Well, I've changed my mind. I began watching this film and have been unable to stop, sort of like a book where you can't stop turning the page. I find it to be a very entertaining movie, and I stopped listening to critics a long time ago. So, you've all heard the beautiful Neal Diamond songs, and the film is not had at all. Definitely worth a look.
7 people found this helpful
See all reviews
Back to top
Get to Know Us
Make Money with Us
Amazon Payment Products
Let Us Help You
EnglishChoose a language for shopping. United StatesChoose a country/region for shopping.
© 1996-2021, Amazon.com, Inc. or its affiliates