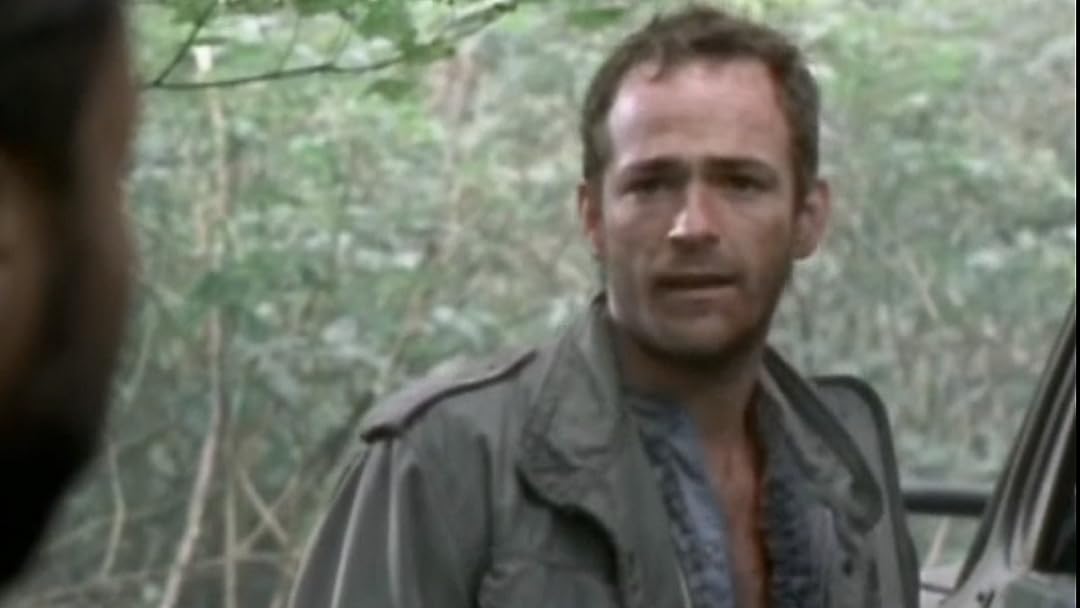 (440)
7.0200213+
Based on a successful European comic book, the series is set in a future post-apocalyptic-like world. Jeremiah is one of the oldest survivors of a deadly virus that wiped out the adult population, sparing only those at puberty or younger.

MusicfanReviewed in the United States on May 4, 2020
5.0 out of 5 stars
Well written series
Verified purchase
For those who are fans of JMS, you'll notice flashbacks to his other series in the writing, but together with an excellent story comes some great acting from the cast, with some notable guest stars coming in for various episodes.
I just wished that the aspect ratio was correct (it looked like 3x3 instead of 4:3, but the story was compelling enough to sit through it anyway.

Well work the watch in any form.

DarthJusticeReviewed in the United States on November 26, 2012
5.0 out of 5 stars
Welcome To The End of the End
Verified purchase
Jeremiah is a post-apocalyptic TV series that ran in the early 2000s from 2002 to 2004 on Showtime starring Luke Perry as the titular character searching for the almost mythical Valhalla Sector his father told him about as a child and Cosby Show alum Malcolm-Jamal Warner as Jeremiah's best friend Kurdy. In 2006, a virus spread around the world killing virtually ever post-puberty person everywhere. 15 years later, the young survivors have now become adults themselves in a world where society as it was no longer exists. Instead, people have formed small communities where trading and bartering have become the de facto method of currency as people try surviving the best way possible.

As for Jeremiah and Kurdy, they find themselves ultimately becoming part of a group at NORAD, run by Marcus Alexander, a man with large dreams of bringing people out of the rathole situation the virus left them in and bringing a better world for everyone.

I had seen a little of show once on the ScyFy Channel a year or two ago and enjoyed what I saw a lot. Finally buying it, I was not disappointed by season one at all or felt like the $12.31 I spent (counting shipping) was wasted.

The acting in the show, from all the main and non-regular actors, was pretty good. As far as non-regular cast members go, I thought Jason Priestly, who starred with Luke Perry on a certain popular 90s show, was great as the demented psychopath whose group happened to have set up home in a former military base.

The show was a little slow in the beginning but I thought it picks up nicely as it goes along though. I think this is the kind of show you watch more for the characters, however, than the plot itself of each episode.

If you're someone who is into post-apocalyptic fiction, this would be a worthy show to check out.
2 people found this helpful

Homeschooling Single MomReviewed in the United States on August 26, 2004
5.0 out of 5 stars
A tragically underrated sci-fi classic
Verified purchase
In this series by the creators of Babylon 5 (which I liked much less than Jeremiah), Luke Perry plays Jeremiah, a kind of lost, disaffected mid-20s guy who 15 years earlier lived through what's come to be known as the Big Death - a bioweapon hormone-based virus that 15 years earlier wiped out everyone who was past puberty. So it was that civilization was totally engulfed in post-apocalyptic chaos, since the only people who were left living were the children.

Things haven't changed much in 15 years. In fact, with supplies from "Before" rapidly waning, things may actually be getting worse. There's no electricity or running water or long-distance communication any more, batteries and gasoline are worth their weight in gold, food is hard to come by, and society is basically total anarchy. They're living off the scraps of the world "before."

In the midst of all of this, Jeremiah's on a quest to find the place that his parents told him they were heading to for safety before they disappeared 15 years earlier. He assumes they're dead like all the other adults, but still wants to know "how their story ends."

In the pilot he meets Kurdy, who is played to pitch perfection by Malcolm Jamal Warner as this slightly younger, very lonely guy and they sort of form a team, realizing there's strength in numbers. He's looking for something too - he just isn't sure what that might be yet.

The series is about the really gritty, harsh world they live in, the political battles between the various factions that want to take over, and the hope of a better tomorrow. The story telling is very intimate. The scripts are often punctuated by quiet, revealing moments for the characters, and the show makes no bones about how much the inhabitants of this world constantly suffer, so it's really harrowing at times, but the characterization and acting and plot are extremely gripping.

I originally caught this when it aired on Showtime and bought the season on DVD, and I wasn't sorry. The world of the show is very realistic, and the dialogue is fascinating, because none of these characters went to school much, and they all talk and act like you'd expect people whose world ground to a traumatic halt as children to act. They're bratty, selfish, manipulative, never stupid (survival skills born of necessity and all that) sometimes painfully naive, and always hopeful that things will return to the way they were "before."

The DVD has hours of extras that show exactly how much thought has gone into building the mythos of this show. Showtime is just now going to start airing the second half of S2 in September 2004 (the last new episode aired November 2003) and no one is sure about a third season. But this is modern sci fi at its best and most gripping, and while the price is a bit steep at nearly $80, it's well worth it for the quality. Who would have thought that a show starring Dylan from "90210" and Cliff Huxtable's only son could be this good? =)
35 people found this helpful

DWReviewed in the United States on October 2, 2013
4.0 out of 5 stars
Great first season
Verified purchase
The product came as advertised, and for the price I was very pleased. If you like Post-Apocalyptic plots, this is one you should check out. I underestimated how good it would be. This show has a great cast but the writing to me is also very good. At times sure, you are not dealing with blockbuster sets or CG, but this show really does not need that. It has everything it needs to tell a story, and the depth with the characters makes me like it even more. Not much more I can say, other than I can't wait to see Season 2. Adventurous, thoughtful and creative while invoking the best and worst personas of the human element.

knowidentReviewed in the United States on November 28, 2008
4.0 out of 5 stars
Luke Perry? Who Knew?
Verified purchase
Like many other reviewers I discovered this great show by accident browsing through the Netflix SciFi section. So 5 years after the show was cancelled I'm discovering Jeremiah and Kurdy's world for the first time. Yes, the first season is a little slow. But I've decided it's supposed to be slow. No lights, no electricity, no running water and no television. The viewer travels with Jeremiah and Kurdy at their pace (where DO they get the gas for that truck, anyway? I guess we're not supposed to ask.) Follow along with them and learn about life and human nature. Rent or buy it, but enjoy it. If I have one complaint it would be that the characters often use slang or expressions they probably wouldn't have had time to learn before thier parents died. Might they not even have their own popular culture jargon by now? Just wondering.

Not being the right age to enjoy his earlier work, I had no idea Luke Perry was such a good actor. Through season one and two he grows his Jeremiah character--often with a great deal of protest--into a leader. Jamal is also great. He's perfect in this role. Just perfect. His character also grows and matures and it's plain entertaining to watch. I have just four episodes left to watch of season two. I don't want it to be over! The addition of the new characters in season two was also an excellent decision.

The clean underpants scene had me laughing so hard I almost rolled off the couch. What an imagination. Two favorite moments: Theo discovering the hotwater and toilets in the Thunder Mountain ladies room and "When was the last time you even saw a pair of underpants, Jeremiah?" --Kurdy.

Enjoy.
One person found this helpful

Bindy WuertenbergReviewed in the United States on February 5, 2014
5.0 out of 5 stars
I wanted more!
Verified purchase
One of the best apocalyptic series ever written for tv, well acted and compelling. But the network dropped the ball on this one. Like so many of the really good series in this genre, it was never promoted well, nor placed in a good time slot. So as they all seem to go.., it died before it even got started. This series is awesome, thoughtful, compelling, and asked more questions then it answered..., only because it ended too soon! The second season can be hard to find, and is expensive..., but worth it if you can find it. A worthwhile investment for anyone that loves this genre. Luke Perry and Malcom Jamal Warner are excellent in their roles.
2 people found this helpful

JPReviewed in the United States on September 9, 2021
5.0 out of 5 stars
Great Series
Verified purchase
Came in a beautiful box for storing the film. Six discs with the entire first season. There is episode selection and the film quality is excellent.

Amazon CustomerReviewed in the United States on May 31, 2004
4.0 out of 5 stars
Good Sci-Fi fair
Verified purchase
When the series originally ran on the showtime network, I was only able to watch the pilot, for some reason. I really got into the show by watching the pilot movie, and really wanted to see the rest of the series. This Box-set is the perfect way to view the season in it's entirty.
The series itself is a mix of a couple series that have come before it. It has elements of firefly, stargate sg-1, dark angel, and Mad Max, but adds its own originally to it. But the one downside that I have found of this series is that a few people (at least in my group of friend) cannot stand Luke Perry, and if that is you, you should not even try to watch this, because no matter what anybody tells you this is definatly Luke Perry's show.
3 people found this helpful
See all reviews
Back to top
Get to Know Us
Make Money with Us
Amazon Payment Products
Let Us Help You
EnglishChoose a language for shopping. United StatesChoose a country/region for shopping.
© 1996-2021, Amazon.com, Inc. or its affiliates