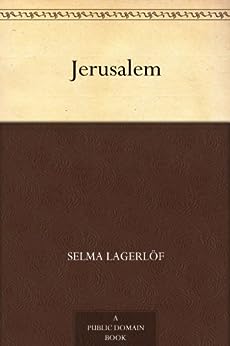 by Selma Lagerlöf (Author), Velma Swanston Howard (Translator) Format: Kindle Edition
See all formats and editions
Sorry, there was a problem loading this page. Try again.
This book was converted from its physical edition to the digital format by a community of volunteers. You may find it for free on the web. Purchase of the Kindle edition includes wireless delivery.
Read more
Previous page
Next page

deha
3.0 out of 5 stars Swedan to Jerusalem
Reviewed in the United States on January 9, 2014
Verified Purchase
Lagerlöf tells it all like a fairly simple story. focusing on the inhabitants of a small village deep in the forests of Sweden, it follows the wave of religious awakening that swept across the Swedish countryside in the late 1800s and led some to abandon everything and everyone they'd ever known to make the pilgrimage halfway across the world to settle in Palestine. She takes her time setting things up; of the two volumes, the first is set entirely in the small parish they all come from, setting up who they are, the life they've led for generations, and the conflicts that arise when the modern world starts getting closer - both material and ideological/religious rules suddenly start changing, and all of a sudden it's not a given that the richest farmer, the schoolteacher and the preacher are unquestionable authorities. The second volume details what happened to the ones who, eventually, sell their farms and give up everything to emigrate to a country about which they know very little apart from what they've read in the Bible.
Read more
One person found this helpful
Helpful
Report abuse

Sharon Bove
5.0 out of 5 stars Roots
Reviewed in the United States on June 3, 2014
Verified Purchase
A deeply moving story of generations of Swedes and their spiritual pilgrimage that finally and selectively leads them to uproot and settle in Jerusalem. It was especially meaningful to me because of my Swedish roots, the book bringing to life this culture which has been largely lost to me. The story takes place in a time that my ancestors made the decision to come to America. Based on actual events, Ms. Lagerlof drew me to research the historical background which is fascinating. The community in Jerusalem was founded by the composer of the well-loved hymn, "it is Well With My Soul," after suffering great personal loss and tragedy...it's another side of the story. The writing of this Nobel Prize-winning author is as wonderful as one would expect--no disappointments! This is highly recommended and very thought provoking classic literature!
Read more
5 people found this helpful
Helpful
Report abuse

alldayReader
3.0 out of 5 stars Interpreting Messages from Heaven
Reviewed in the United States on March 31, 2009
Verified Purchase
This novel is an exploration of that universal dilemma, the angst shared across countries, across generations, gender and race, which is the conflict between satisfaction with life as it is and the desire for something more, and of the tonic provided by religion to soothe and ease the dilemma. Lagerlof shows both the benefits and the limits of religion in her portrayal of the hopes and trials of rural town in turn of the century Sweden. The people of the town struggle to live by the word of the Lord as preached down by their uninspired pastor and the local lofty school teacher. Bound tightly in traditions, restricted by the rules and eyes of small town life where everyone knows everyone's business, the life choices of each villager, whether rich or poor, are only as good as the neighbors judge them to be, and the only protection against harsh judgment is to do everything in terms of "As God wills." The ruling family of the village always fall back on the phrase, "[a]ll we Ingmars need do is walk in the ways of God " to justify their actions but what guidance does such a phrase really provide?

Lagerlof's novel shows the villagers pursuing their needs and desires, using religion as a screen and an excuse for following whatever path is chosen, good or bad. Yet the judgment of the Lord will show itself in how a farm prospers, or in the violence of a thunder storm, or in the nature of a season, warm and mild or harsh and freezing, and the people then quake in fear of their own evilness. These are not people who do what they want under a label of "religious": they are angst and guilt ridden, unhappy most of the time, and always questioning themselves and their neighbors.

The villagers appeal to notions of fate and chance to help them decide on what to do and how to do it, and call on Providence to do what it is supposed to do best, provide. But who will decipher the messages from Providence, who will interpret the wishes of the Lord? A lay preacher comes to town and instigates a movement towards leaving Sweden, convincing many of the villagers to set out for Jerusalem and leave the past behind. We understand the reasons why such a plan appeals but we also foresee failure. The internal misery these people carry around cannot just be left at the border.

Lagerlof illustrates beautifully the problem inherent in religion, which is that all messages from heaven are interpreted here on earth by man, and according to man's own needs, desire, and fears. Will the lay preacher's religion be enough to save these villagers from Sweden and bring them some peace? The novel ends with children crying and whimpering, "We don't want to go to Jerusalem; we want to go home."

Lagerlof was the first woman to win the Nobel Prize for Literature, awarded to her in 1909. She is most famous for her children's book "The Wonderful Adventures of Nils" in which a rotten little boy is reformed through traveling with wild geese to spots of natural and wild beauty throughout Sweden. Her writings are known for their mix of realistic portrayals of life in rural Sweden and the fantasy necessary to escape the often harsh realities of such a life. Whether the fantasy is having a spiritual vision (at one point in Jerusalem, two men are on a bridge and the heavens open up to offer them a view of Paradise) or the imaginings of adventures in nature such as Nils has, relief is provided from the daily grind. Lagerlof is wonderful at illustrating the incredible beauty of rural Sweden in all seasons, leading me to think it was not escape from the physical landscape the people in her novels needed, but escape from the suffocating rules of small town life. Religion was one escape provided, but not necessarily the best escape: I think I'd prefer the wild adventures of Nils to the pilgrimage to Jerusalem.

Clara
5.0 out of 5 stars Jerusalem is an outstanding piece of literature. Nevertheless, ...
Reviewed in the United States on September 16, 2015
Verified Purchase
Jerusalem is an outstanding piece of literature. Nevertheless, this edition lacks the second part of the novel, "The Holy Land", so the book is incomplete. I looked in Amazon books for that part, but I did not find it. I had to buy the Spanish edition, which has both sections, to be able to finish my reading of the book.
Read more
3 people found this helpful
Helpful
Report abuse

JMK
5.0 out of 5 stars Glad I read it
Reviewed in the United States on January 8, 2019
Verified Purchase
Written with a beautifully descriptive style, interesting imagery, and curious interpretation of events. Definitely leans toward the fictional, rather than historical, narrative of a fervent group of Swedes and their decision to go to Jerusalem. But the story stops as they're leaving Sweden. I would have liked to read this author's take on the rest of the story.
Read more
One person found this helpful
Helpful
Report abuse

Barbara
4.0 out of 5 stars Spellbinding saga based on true events.
Reviewed in the United States on January 31, 2019
Verified Purchase
This book is so well written,even from translation. My interest came from wanting to learn more about the hymn "All is well with my soul".
It's a great read about another time and place.
I recently visited Jerusalem and the site these pilgrims settled in is now a hotel for all.
Read more
One person found this helpful
Helpful
Report abuse

Digital Panache
4.0 out of 5 stars Deeply emotional and moving
Reviewed in India on November 26, 2018
Verified Purchase
The more you read this book the more it grows on you. It talks so much about almost everything that has happened in this world in the name of wars, religion and nationalism. This book has a subtle story but a deep and powerful one which will move you and make you pensive. What leads to people leaving their beloved habitats and move like nomads. Is it just the human nature to belong to a place and try and establish itself or is it the feeling of loathe and control that deprives many. This book will answer many questions and open up many more as well. An emotional read for me.
Read more

Digital Panache
4.0 out of 5 stars Deeply emotional and moving
Reviewed in India on November 26, 2018
The more you read this book the more it grows on you. It talks so much about almost everything that has happened in this world in the name of wars, religion and nationalism. This book has a subtle story but a deep and powerful one which will move you and make you pensive. What leads to people leaving their beloved habitats and move like nomads. Is it just the human nature to belong to a place and try and establish itself or is it the feeling of loathe and control that deprives many. This book will answer many questions and open up many more as well. An emotional read for me.
Images in this review