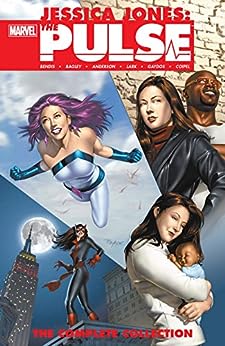 Jessica Jones, breakout star of Brian Michael Bendis' hit series Alias, is back! And the ex-super hero-turned-private investigator is starting a new chapter in her life - working for the Daily Bugle's new super hero section, The Pulse! Jessica's first assignment: to uncover the identity of a former Bugle reporter's super-powered murderer! How is Norman Osborn involved? And how will Jessica's shocking discovery affect the entire Marvel Universe? And when Nick Fury's Secret War spills over into the streets, it hits Jessica and Luke Cage right where they live! With their lives in shambles, Jessica Jones decides to fight back! And finally, it's the moment you've been waiting for: the birth of Jessica and Luke's baby, and their wedding day!
Read more
Previous page
Next page
Kindle e-Readers
Fire Tablets
Free Kindle Reading Apps
Available on these devices 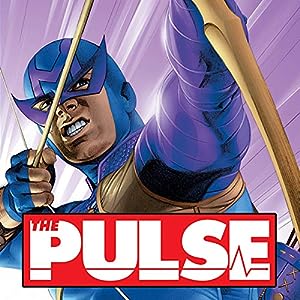 3.7 out of 5 stars
3.7 out of 5
15 global ratings
How are ratings calculated?
To calculate the overall star rating and percentage breakdown by star, we don’t use a simple average. Instead, our system considers things like how recent a review is and if the reviewer bought the item on Amazon. It also analyzes reviews to verify trustworthiness.
Top reviews

C. Derick VarnTop Contributor: Graphic Novels
3.0 out of 5 stars So much promise
Reviewed in the United States on December 24, 2017
Verified Purchase
Bendis lost something in this run: Alias had a lot of vision and had a Marvel product that legitimately rivaled the best of the Vertigo run. This premise had equal promise, going into the world of the Daily Bugle realistically which Ben Urlich and Jessica Jones together.

Yet the writing just isn't up to it. Bendis has strong dialogue and in the last arc with Urlich and the D-man nearly perfect, but there are too many crossovers, too many characters that get simplified, and a weird inability for the book to stick to a tone. Mark Bagley's artwork is strong and clean but doesn't thematically fit, Anderson's figure work seems muddled, and only when Gaydos returns for the last arc does title seem to get a tonal match.

The final New Avengers plot was both a tonal and stylistic mega-shift to which the marriage of Luke Cage and Jessica Jones seems entirely incidental.

Like many have said, a mixed bag.
Read more
One person found this helpful
Helpful
Report abuse

James B.Top Contributor: Batman
4.0 out of 5 stars Why do these things keep getting cancelled?
Reviewed in the United States on September 11, 2016
Verified Purchase
When I read Alias, the series that really put Jessica Jones on the map, I knew I was reading something great. Though it had it's flaws, Alias breathed serious life into the Marvel Universe, so of course I had to read the sequel. While it's not quite as good, the Pulse is at least a decent send off to Jessica.

At the start of the Pulse, Jessica is given a job by J. Jonah Jameson. Citing falling sales, Spiderman's greatest nemesis finally decideds to give some more balanced coverage of the city's superheroes, and hires Jessica as a consultant who can give the Bugle access to the Avengers and the like. Jessica is partnered with Ben Urich, also of spiderman fame. Every scene in this comic can be traced back their investigative work for the paper, or by Jessica's relationship with boyfriend Luke Cage.

Now, this book has two problems that leave it well behind Alias in terms of story. One, while Alias was fairly self contained, Pulse relies a lot more on references to what's going on in the Marvel Universe for plot. The Secret Wars tie in uses up four issues and isn't explained well in this comic, a House of M tie in is omitted entirely for no good reason, and Luke Cage joining the Avengers (and Jonah slamming him in the press) happens entirely offscreen. Second, Jessica doesn't really get to do much other than give birth. Ben Urich does most of the investigative work on his own. For these reasons I wouldn't have give this book more than three stars if I had read it on it's own.

But, for fans of Alias, we finally get to see Jessica get married, and have the Marvel equivalent of living happily ever after. This ended on a much better note than Alias did, so I can recommend it for fans of that series.
Read more
3 people found this helpful
Helpful
Report abuse

Ashley
4.0 out of 5 stars Good Collection
Reviewed in the United States on April 5, 2018
Verified Purchase
Good collection of Jessica Jones' storyline - worth the read if you like her character. Great art by multiple artists.
Read more
Helpful
Report abuse

D. Martillo
4.0 out of 5 stars Cool story
Reviewed in the United States on January 13, 2018
Verified Purchase
Im not much of a comic reader. But after watching netflix marvel series i had to check out more of their stories. I like jessica jones' character and her and luke cage make a perfect crazy couple.
Read more
One person found this helpful
Helpful
Report abuse

John
4.0 out of 5 stars Jessica Jones is a must
Reviewed in the United States on March 13, 2018
Verified Purchase
Essential to adding clarity to the recent Netflix series, I highly recommend the comic to fans of the show, which takes some liberties with the material.
Read more
Helpful
Report abuse

Amanda
4.0 out of 5 stars Nice
Reviewed in the United States on June 13, 2015
Verified Purchase
I heard there was going to be a Netflix series. I figured I would read the source material first.
Read more
Helpful
Report abuse

Donald
5.0 out of 5 stars Really awesome !
Reviewed in Canada on December 19, 2016
Verified Purchase
After a great wedding, let's continue to read! Always a pleasure to relax and quit this world! I like Marvel things!
Read more
Report abuse
See all reviews