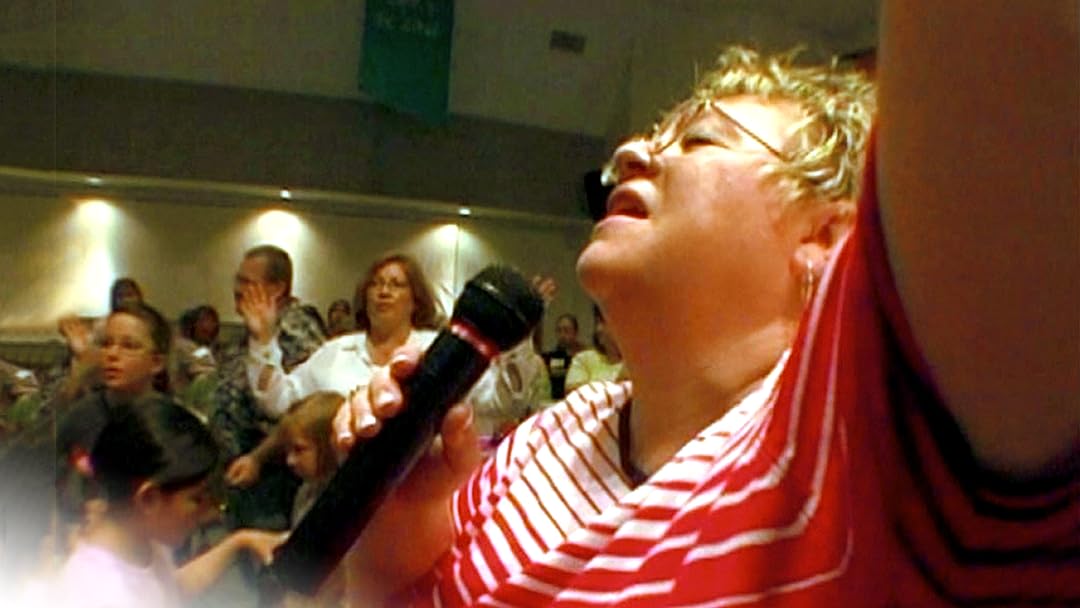 (651)
7.41 h 24 min2006X-RayPG-13
A growing number of Evangelical Christians believe there is a revival underway in America that requires youth to assume leadership roles. Levi, Rachael, and Tory spend their summer at Pastor Becky Fischer’s camp in North Dakota, learning how to become dedicated Christian soldiers in “God’s army.”

Isaiah MReviewed in the United States on June 28, 2020
5.0 out of 5 stars
Great documentary
Verified purchase
This documentary basically shows how my life was like growing up as a kid. I grew up in a very religious christian family, home schooled and being indoctrinated in church several days a week. I also went to all of the church camps and started to become a young preacher and leader. I am now 25 and I am so glad I realized how dangerous and false all of these teachings are. I am a happy atheist now and I hope more people can watch this documentary and realize how dangerous radicalized christianity can be.
21 people found this helpful

John BalesReviewed in the United States on December 3, 2021
5.0 out of 5 stars
Wake up America!
Verified purchase
Well, this was a reminder of why I left evangelical Christianity in 1977. I'd been involved in it since 1972, and to be honest I was never really comfortable with it deep down. But it took actually voicing an opposing opinion to a church leader, who became visibly angry at being challenged and responded that I was the one with the problem and shouldn't be speaking until I really understood things (that is, things as he believed them). The problem was that I was observing that what we were saying and how we were treating others wasn't exactly reflecting the teachings of Jesus in the Gospels. Anyway, I turned my back and left him and his group behind, as well as evangelicalism. And that was the way I felt watching Jesus Camp. They began indoctrinating these children from infancy. The home schooling reinforces what they are teaching (and watching that home-school session, there's no question where today's anti-science crowd are coming from). But the two major issues they're seen pushing is evangelical positioning in government, and the pro-life movement. The latter I found the most disgusting, as most of these kids were of an age they probably had no sex-education or knowledge about human reproduction, much less the various issues for which a woman may choose to have an abortion (dead fetus still in body, fetus has serious hereditary defects, fetus the product of rape or incest, as well as not prepared for a child). Adults were doing some serious indoctrination and manipulation and then using them in their anti-abortion protests. Just disgusting. But the thing is, we are today in late 2021 seeing the fruition of evangelicals; years of preparation to end abortion and takeover of the halls of power so they can move on to remaking American in the image of it as they see it.
4 people found this helpful

YLReviewed in the United States on November 16, 2021
5.0 out of 5 stars
Yikes! An important movie
Verified purchase
This documentary was probably scary when it was made in 2006, but it's even scarier in the lens of history. It was prescient in 2006 and is instructive 2021.

I'll try to give as few spoilers as possible. The movie follows Becky Fischer, founder of Kids on Fire camp in Devils Lake (really!), North Dakota, and three children who are campers: Levi, 12; Rachael, 9; and Tori, 10. Levi and Rachael are friends and go to the same church in ND. Tori has traveled in from Kansas. It tells the story through vignettes of the children at home, at church, at camp, at play, and in other evangelical contexts (rallies and evangelizing strangers). There's no commentary between the vignettes. The opposing view is presented through conversations with Fischer and Mike Papantonio, a Christian radio host who doesn't agree with the politicization of religion or the techniques used to indoctrinate children.

The film opens with a Fischer making a comparison with her camp's indoctrination of children vs. Muslims'. Keep in mind, this is only 5 years from 9/11, and there's a lot of Islamophobia in the culture. She justifies her indoctrination by saying that some Muslims indoctrinate their children to carry guns or wear suicide vests. Then, the movie unfolds...

Much of the film shows stuff that's just part of the Pentecostal religion: praying in tongues, praying over the chairs in the building before the kids arrive. But there's a strong sense that the kids are indoctrinated, and in much more than religion. For example, one student, while being homeschooled is told "Science doesn't prove anything." The child is taught that Galileo was bad for choosing science over religion. In the same scene are discussions of why climate change is insignificant and evolution isn't real.

The picture the film presents of Fischer is not a pretty one. The movie was filmed when the Harry Potter books and movies were popular, and some of the kids had seen them. Some kids' parents forbade their children from watching or reading the series, and that certainly is their right. However, at one point, Fischer calls the characters in the series "enemies of God," and says that if Harry Potter had been in the Old Testament, he would have been put to death. Really, lady? At the main meeting, Fischer calls the kids "phonies and hypocrites." I know that a core tenet of Christianity is that humans are inherently sinful, but come on, these are kids! The kids are all crying, and one kid confesses that he's not sure he believes in God.

What's most disturbing, however, is the constant drumbeat of war. At one point, a white man with a South African accent tells the kids to "Break the power of the enemy over government" as the kids work themselves into a frenzy smashing cups with a hammer. At one point, Fischer says "make war with [government]," "This means war. Are you ready for it?" The kids are shown a cardboard cutout of then president George W. Bush and are told to "Do some warfare for him" at which point they begin speaking in tongues. At another point, two children tell the interviewer that they feel like they're "being trained to be warriors" At another point, a girl marvels that before her friends' dads, who are missionaries, go to a dangerous place, their kids rally around, jumping and shouting "Martyr! Martyr!"

With all the drumbeats of war, the scariest statement is from Fischer herself: "I think democracy is the greatest political system on earth, but that's just it. It's jus what's on earth. Ultimately, it's designed to destroy itself because we have to give everyone equal freedom."

The kids in the film are now in their mid to late 20s. We have to wonder. I think this is an important movie for everyone in America.

Jessica R. BauchReviewed in the United States on August 5, 2020
5.0 out of 5 stars
A Great Depiction of the Poison of Religion
Verified purchase
I give them zero stars for child abuse but five stars for the documentary. It was really well done and managed not to be judgmental despite the fact that horrendous child abuse and brainwashing was occurring at every moment. Pity those poor children and applaud the ones who got away. Truly we have a long way to go as a society if people think this is acceptable to do to their children.
9 people found this helpful

Maggie BouldinReviewed in the United States on December 30, 2017
5.0 out of 5 stars
Still relevant over ten years later
Verified purchase
To me, this is a movie everyone should see. I am a college teacher, and I show this in my Comp I class every semester. I like that there’s some room for debate about whether the documentary is intending to portray these evangelical Christians in a horrifying light or if it’s simply meant to observe and record them. There are images in this that will probably stay with you forever. The kids themselves are really interesting, and in a classroom setting it’s fun to do a sort of “Where Are They Now” after the movie to show the students how they turned out. I think the movie is excellent, and I honestly never get tired of watching it.
19 people found this helpful

reverendoReviewed in the United States on October 3, 2019
2.0 out of 5 stars
Biased and agenda-driven documentary
Verified purchase
Very biased documentary. They take a fringe neo-pentecostal group and use it as a reference for Children's Ministries in Evangelical circles. May be close to reality in this specific case, but is not representative of what VBSs (Vacation Bible School) look like around the US or elsewhere.
15 people found this helpful

PhiliciaReviewed in the United States on October 9, 2016
5.0 out of 5 stars
Scary brainwashing fear mongering eye opening
Verified purchase
I'm Catholic, and this video just saddened me. In that these adults, who genuinely believe what they're doing is right. Are creating a repressed, brainwashed children into adults full of dread. There is nothing wrong having a active imagination & reading Harry Potter. The focus of what needs to change in society morally is heavily skewed. Telling ghost stories for fun isn't the problem. Being a child discovering who you are isn't either. Jesus never banned dancing. Pleasure without conscience, (in the right context) business without ethics, politics without principle, I could go on. In more detail if I had the time. Thats just a quick reference. Those things need to be the focus for developing adults who can potentially bring others to Christ. None of these things need to be so important for young kids looking for fun at bible camp. My heart goes out to those kids and their families. I wanna reach out to them. I can't even bring myself to finish the film yet. That's what I wanted to share.
18 people found this helpful

CooperReviewed in the United States on August 10, 2014
5.0 out of 5 stars
Because Religion is a powerful tool!
Verified purchase
Because I was born and raised mormon this really hit home for me. I remember watching this and seeing how similar I was to these kids. Honestly I feel sick about it all, and can't believe that this is still happening. Now that I am no longer a believer after serving a full time mission teaching people about the book of mormon. I know what I did was change peoples culture and beliefs to become as my own. As a 19 year old serving a mission, I was so brainwashed. Looking back on it I could not read anything that the church didn't approve of. I was not allowed to use the internet besides email, which was a mormon account. I could not leave my companions side incase I might have sexual encounter with a girl. I lived in constant fear of being punished by god for doing something wrong. I honestly believed that god guided my every step and helped my find people to baptize. If you are on the fence about your religion watch this film it will help you get a different perspective.
25 people found this helpful
See all reviews
Back to top
Get to Know Us
Make Money with Us
Amazon Payment Products
Let Us Help You
EnglishChoose a language for shopping. United StatesChoose a country/region for shopping.
© 1996-2022, Amazon.com, Inc. or its affiliates