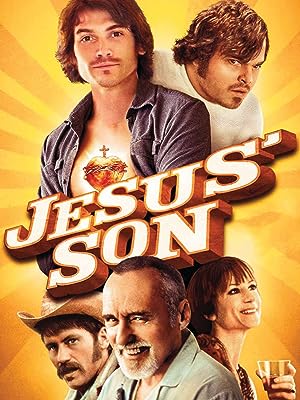 P. PaddenReviewed in the United States on July 11, 2019
5.0 out of 5 stars
This rating system needs more stars.
Verified purchase
When I read Denis Johnson's book Jesus' Son for the first time I was so torn between admiration - jealousy at Denis Johnson's wordsmanship, and love for his reprehensible, funny, loveable and yet somehow very reliable narrator - that I didn't know whether to laugh or cry. Actually, I did a little of both. If a young Willie DeVille had chosen to write fiction rather than music, and if he lived in Idaho rather than the East Village, this is the sort of story he'd have written - by turns lyrical, lachrymose, hilarious, and street stupid as hell. Here, for example is a very brief sample of what I found so breathtaking - our tour guide to the underbelly of Iowa describing his favorite watering hole:

"I looked down the length of the Vine. It was a long, narrow place, like a train car that wasn't going anywhere. The people all seemed to have escaped from someplace - I saw plastic hospital name bracelets on several wrists. They were trying to pay for their drinks with counterfeit money they'd made themselves, in Xerox machines."

Tell me you're not laughing.

This same sort of mordant zaniness infuses Alison MacLean's beautiful film adaptation, and everything about her vision of Johnson's own private Iowa jives with what he wrote about with such fierce tenderness. Billy Crudup offers a nice, nuanced performance as the narrator (code name FH, which stands for exactly what you think it does), who goes from hapless to helpless as his girlfriend Michelle introduces him to heroin, which immediately sets about claiming him for its own, and then back to hapless again as he makes his way from rehab to a series of jobs where he actually turns out to be somewhat helpful. Along the way their relationship founders under the relentless distraction of their collective drug habit which is the biggest little tragedy in a movie full of them because, sans heroin, they'd have been made for each other and we're made to feel that when we watch them kiss. Crudup's character, like Jesus' son if he'd had one, just never measures up to his potential. He's a sweet guy, his intentions are good, his heart's in the right place, but he'll never be a messianic figure or a saint; he's too easily distracted by the more determined sinners who cross his path hell bent on leading him astray.

TonyReviewed in the United States on June 26, 2019
2.0 out of 5 stars
Not That Good But It Has Its Moments
Verified purchase
It's not terrible, so that's a plus. It's based on a compilation of short stories by Denis Johnson, and does a good job of making it feel like the book. The font used to introduce the segments is taken directly from the printed source.

What the movie gets right is the settings. They filmed in locations that were true to the tone of the stories. A lot of the casting was really well done, save for FH. Billy Crudup is a capable actor, but he was not a good choice for the lead. He plays the character as a wide-eyed young kid, whose demeanor seems hopeful and optimistic. In this adaptation, he does some drugs and likes to drink, but he seems like a pretty nice guy. In the book, FH is far more weary, a bit violent, and sad.

The movie condenses a lot of the action and characters. That's ok - all movies do that. But I felt like important bits were glossed over, and if you hadn't read the book beforehand, you'd be slightly lost. Or bored.

I have to admit, while I liked the book, I also thought it was pretty much standard in its genre, and the movie did neither do it justice, nor did it wreck the material.
One person found this helpful

GameLady50Reviewed in the United States on January 21, 2017
4.0 out of 5 stars
Sweet Jesus!
Verified purchase
I really enjoyed this film, why? It's unlike any other. The story was odd and offbeat and the entire cast of characters were great, especially the protagonist played by Billy Crudup. The situations he gets into are wild and amusing but mostly believable. He also maintains a naive innocence and awkwardness throughout the film which I loved. His girlfriend was a little nuts but I felt bad when she left him. They got the 70's time period to look pretty authentic. Well shot (I'm pretty sure it was shot on film so it has a nice warm look) and has a decent soundtrack. Would watch again
3 people found this helpful

Seth DelanoyReviewed in the United States on December 17, 2021
5.0 out of 5 stars
I watched and enjoyed
Verified purchase
Liked

L.A.SharpReviewed in the United States on January 11, 2017
4.0 out of 5 stars
Comfortably Awkward
Verified purchase
Bizarre storyline but oddly enjoyable. The main character was the most awkward I've ever seen. It was adorably endearing while also disturbing. I didn't like his girlfriend at all. There was an unspoken grey area of her getting him hooked on heroine. But he was already drug experimenter.His mindset was so different it kept me interested in the next move he'd make.
3 people found this helpful

Cheryl M. UtechtReviewed in the United States on December 24, 2009
5.0 out of 5 stars
Gift delivery
Verified purchase
I ordered a total of five books. Each book came from a different vendor!
I would like to say I had a window of ten days, which is shorter than your window time- to have all delivered so
I could have them early enough to wrap and send for Christmas.
Each and every single one came within that time frame. Four came within one week of order! The other a couple more days later. Well within the time you offered!
I bought Jesus Son, used, in good, like new condition and that is exactly how it arrived.
Wrapped in plastic so it looked like new.
GREAT JOB!! I am a fan and order often now from Amazon. Not just books either!

Rabbi Arnold Mark BelzerReviewed in the United States on February 9, 2017
4.0 out of 5 stars
Good and Slow
Verified purchase
Glacial movement. Requires patience. At times you really don't want to watch....somehow I slogged through it. It turns out that it was worth it!
7 people found this helpful

Amazon CustomerReviewed in the United States on April 4, 2018
5.0 out of 5 stars
Darkly funny. Terriby sad. And uplifting.
Verified purchase
One of the best movies ever made. It is incredibly funny at times, heart wrenching at others. It does a great job at portraying the horrors of intimacy, the agony of loss and regret, and the beauty in even the mundane bits of life.
6 people found this helpful
See all reviews
Back to top
Get to Know Us
Make Money with Us
Amazon Payment Products
Let Us Help You
EnglishChoose a language for shopping. United StatesChoose a country/region for shopping.
© 1996-2022, Amazon.com, Inc. or its affiliates