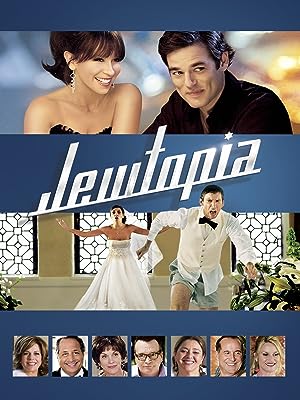 (80)
4.41 h 28 min201216+
The comical story of two friends, one Jewish and one not, in search of the women of their dreams. Starring Jennifer Love Hewitt, Ivan Sergei, Joel David Moore and Jamie-Lynn Sigler.

S. RoseReviewed in the United States on June 23, 2019
1.0 out of 5 stars
Please, DON'T BOTHER!!!
Verified purchase
What a giant, unfunny, 90-minute raging garbage fire this movie was! I think the only reason I watched through to the end was, I was maybe torturing myself into believing I had to see how it all turned out. And, by the way, I am Jewish and I don't take offense very easily. I can appreciate vulgar and/or outrageous humor, but only when it's FUNNY! I read the charming and hilarious book on which this was obviously extremely loosely based. That's why I sought out the movie in the first place. Such a disappointment~! It's just BAD, not even so-bad-it's-good. I stand by my headline. We need not speak of this again!
2 people found this helpful

Marie J.Reviewed in the United States on May 19, 2019
5.0 out of 5 stars
It's a farce, people, it's a farce!
Verified purchase
I laughed at loud many times. If you hate farce and slap-stick humor, don't watch this film. Farces can offend everybody, just like roasts. No one is excluded. Today, everybody is offended and insulted and irate. Red Skelton was a wonderful clown. People today would probably not see the brilliance of his comedy and call him a moron. People think they are so tolerant until....it's not their kind of humor.
3 people found this helpful

TAReviewed in the United States on August 20, 2016
1.0 out of 5 stars
Awful & Offensive to everybody
Verified purchase
This sucked. I am NOT a sensitive person, nor am I Jewish. I love comedies, including toilet humor. This movie was so bad in so many ways it was painful to watch. How do you fail at toilet humor? It's the bottom of the barrel in comedy. I guess they were trying for satire, but failed miserably at that as well. The film played on stereotypes of Jews, WASPs, Latinos (the plumbers), and even blacks (the supposedly Jamaican nurse....couldn't you leave us out of this one? Was that asking too much? You had to come for us too?)
Maybe they should've consulted Chris Rock, Dave Chappell, or even Bill Burr in how to poke fun at aspects of a demographic without actually insulting said demographic as a whole. They were supposed to make the audience laugh at the stereotypes the movie highlights. Instead, it has the effect of blackface: where you're left with an inaccurate, warped view of the people depicted. If anything, this film shows the importance of being careful with satire. The point is to use exaggeration, humor, and/or irony to expose or call attention to an issue, in this case Jewish stereotypes. When satire is done as irresponsibly as Jewtopia, you run the risk of misreprenting a particular group & making them look bad, especially to individuals outside of said group who may know little if anything about them.
4 people found this helpful

Julie Reviewed in the United States on May 5, 2019
1.0 out of 5 stars
Pretty bad
Verified purchase
Didn't think it would be that bad but ....wow

S. SnowReviewed in the United States on January 15, 2014
4.0 out of 5 stars
Get over it!
Verified purchase
This movie is funny! And we loved seeing characters we know from some TV shows like Soprano's and Hot in Cleveland.

Of course it's got some rude and crude humor and stereotypes... and some people are saying they are 'offended' by this movie.
Get over it, and yourself. What did you EXPECT from a movie starring comedians, catagorized as a 'comedy' and titled "Jewtopia" ? The Ten Commandments" ?????

If you hated this film and were offended... check out Sarah Silverman. :0)

But, as Carlin said in an interview one time... "Humor MUST contain some threads of truth... or it isn't funny."

This movie contains a lot of truth... and it is funny!

DouglasReviewed in the United States on June 24, 2014
5.0 out of 5 stars
Good laugh!
Verified purchase
Funny movie well worth the rental. The plots a bit thin but the jokes were good, particularly if you're familiar with Jewish stereotypes.
6 people found this helpful

Amazon CustomerReviewed in the United States on October 8, 2015
5.0 out of 5 stars
a satirical look at mixed relations in a religeon sence.
Verified purchase
goofy but then goofy amuses me
One person found this helpful
See all reviews
Back to top
Get to Know Us
Make Money with Us
Amazon Payment Products
Let Us Help You
EnglishChoose a language for shopping. United StatesChoose a country/region for shopping.
© 1996-2022, Amazon.com, Inc. or its affiliates