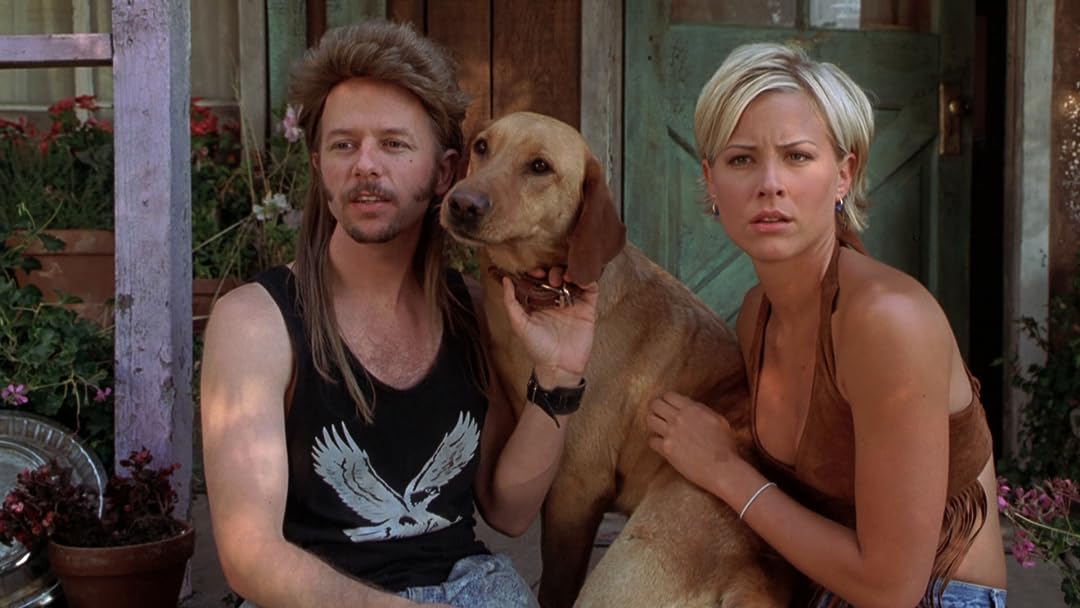 (11,527)
6.01 h 31 min2001X-RayPG-13
Joe Dirt is a janitor with a mullet hairdo, acid-washed jeans and a dream -- to find the parents he lost at the Grand Canyon when he was a belligerent, trailer park-raised, eight-year-old. Now, the irrepressibly optimistic Joe hits the road alone in search of his folks, but as Joe's life story unfolds, jeers turn to cheers, and an entire captivated city tunes in to hear the adventures of Joe Dirt.

Shauna BurrReviewed in the United States on April 18, 2021
1.0 out of 5 stars
You wouldn't expect movie name dirt to dig hesrflt moments, WRONG !!!
Verified purchase
Home is where you make it.

Life’s a garden; dig it.

Loved the plot-driven, yuk-filled flick. This deep dive into the twisted shadow self of the toiletman Dirt really lubricated my cooking surface. Elmo, Kid Rock and the rest of the Spade ensemble did it again. It was worth the four dollars that I could have spent on anything else. Just want to say thanks to Kid Rock for making me think in this otherwise chuckle-chocked family-centric romp. I look forward to watching this movie again with my 14-year-old nephew, who is growing up to be a coward like Spade.

The teens love Sassy Spade and you will too. Shell out the $4 to watch this movie; you won’t regret it!

My favorite part of the movie was when Kid Rock yelled insults at the coward Spade, which I also would have done if I was in his position. This is called character development, and it’s what good movies do, which is how I know this was a good movie, and worth the $4 that I could have spent on a travel-sized bottle of ibuprofen.

In conclusion, this stacks up againdy some of the greats (Hubie Halloween, Croc Dundee, The Hot Chick (post-9/11 but still good and uplifting in spite of the times, and I believe art has the ability to bring people together in the darkest times), also Deuce Bigalow). If you loved those flix and you have four buckaroos burning a hole in your acid washed jeans, and you have a head full of good ideas burning a hole in your brain wig, send a letter to Jeff and ask him to send ya the flick.

P.S. The DVD didn’t work and was in black and white, so I will give this one star. @davidspade

Bethany PReviewed in the United States on June 22, 2020
4.0 out of 5 stars
Dang!
Verified purchase
If you don't like dumb comedies you won't like this so keep on movin'. Joe Dirt is the best worst movie. I usually can't stand David Spade tbh but I love me some Joe Dirt. If you're looking for an easygoing comedy that doesn't try to get too serious at the end (it gets a little serious but it's bearable) and you made it to 2020 without seeing this, give it a shot.
2 people found this helpful

FireTyrantReviewed in the United States on June 25, 2020
5.0 out of 5 stars
One of my favorite movies
Verified purchase
Almost every line in the movie is quotable. If you have not seen this movie and are looking for a great laugh, do not hesitate to purchase. One of David Spades best movies
3 people found this helpful

StewieReviewed in the United States on December 29, 2018
5.0 out of 5 stars
Great movie, a classic.
Verified purchase
A funny comedy with some quirky and slightly dated jokes. David Spade does a phenomenal job bringing the character of Joe Dirt to life. This movie is also filled with a few odd choices for cast, you have Christopher Walken and Kid Rock in the same movie as David Spade.
4 people found this helpful

IbuycrappystuffReviewed in the United States on October 9, 2017
5.0 out of 5 stars
Funny in its own way
Verified purchase
You don't have to be a fan of David Spade to appreciate this movie.

I have to admit it is funny. Not great, but funny.
6 people found this helpful

GeorgeReviewed in the United States on July 2, 2020
5.0 out of 5 stars
2nd favorite movie all time
Verified purchase
So glad this movie held up to my childhood memory of it. I've said for years that this is my second favorite (comedy) movie of all time and rewatching as an adult hasn't changed my mind.
Non-stop quotes that I'm still using 20+ years later!
In case you're wondering what my favorite movie ever is... Idiocracy (definitely not PG)
One person found this helpful

LooLooReviewed in the United States on November 22, 2019
5.0 out of 5 stars
Love this film
Verified purchase
Joe Dirt is a great movie that’s appropriate for a pre-teen or teen. The humor is relatively clean overall with good messaging about bullying and being a good person.
2 people found this helpful
See all reviews
Back to top
Get to Know Us
Make Money with Us
Amazon Payment Products
Let Us Help You
EnglishChoose a language for shopping. United StatesChoose a country/region for shopping.
© 1996-2022, Amazon.com, Inc. or its affiliates