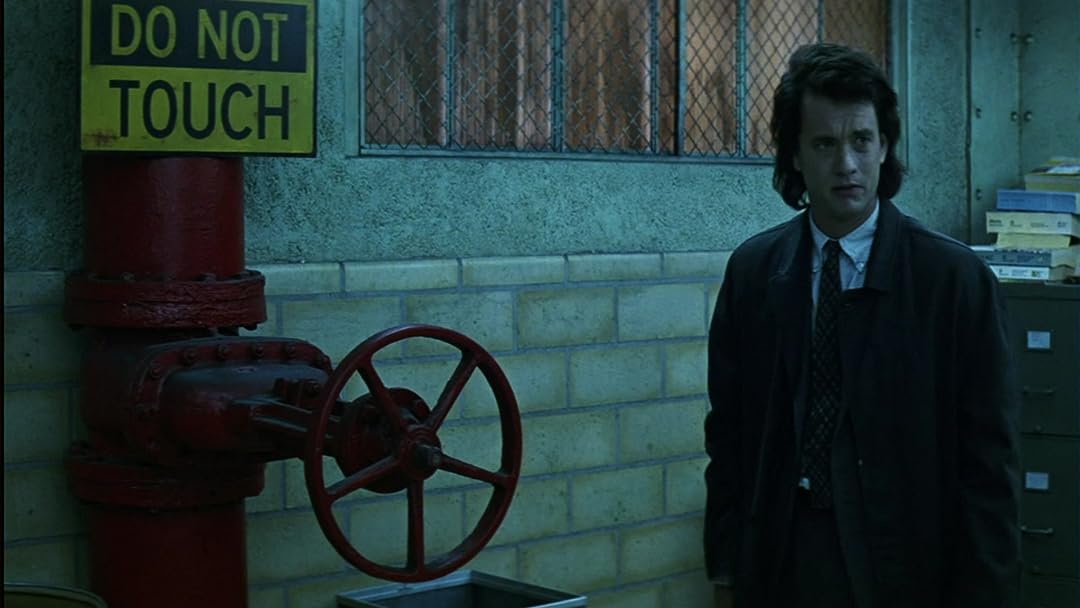 Joe Versus The Volcano

(3,326)
5.91 h 42 min1990X-RayPG
Laughs erupt when Tom Hanks and Meg Ryan fall in love and fall in lava in Joe Versus the Volcano, written and directed by Oscar winner John Patrick Shanley.

If I were to get nitpicky I would say that I kinda liked the color skew of the original office scenes a little better in the original. They had a blue/green tint that made them feel even weirder than they already are.

However the details over all is just great in comparison to the DVD. The shots are all a little wider showing more detail on the edges as well which is cool.

random reviewerReviewed in the United States on June 23, 2017
5.0 out of 5 stars
2017 WB Archive Collection Blu-ray
Verified purchase
Very underrated early Tom Hanks/Meg Ryan movie with an existential, off-beat sense of humor. Worth it for the dreary 9-to-5 company job scenes alone (to the tune of "16 Tons"). The luggage purchasing scene, after Hanks has decided to set sail for an island adventure following a suspicious terminal diagnosis, is also golden. Ryan is very good in multiple, very different roles.

The 2017 Warner Bros Archive Collection Blu-ray looks & sounds great. Also glad they went back to the original poster art for the cover. Special features include a vintage Behind the Scenes Featurette (4 mins 24 secs), Eric Burdon "Sixteen Tons" music video (3 mins 56 secs), and original Theatrical Trailer (2 mins 15 secs). English Subtitles. I don't know why the back cover with all the info isn't shown, so I've provided a picture of it for you.

DaveReviewed in the United States on July 3, 2017
5.0 out of 5 stars
One of my top favorite movies of all time
Verified purchase
On the surface, it's a delightful, little rom-com. Watch it a few times and you see the genius of Shanley. There is a lot of symbolism and metaphor that surfaces that is easily missed, and lots has been written about it. The two main actors, Ryan and Hanks, play four wonderful characters and are a delight together -- it would be nice to see them pair up again in the future (of course, they did, four more times). Joe has one of the best (unavailable) soundtracks from the late 20th century, but you can put together most of it yourself, except for Hanks' own song, which he wrote and performed himself. And if you don't like the end, and it was a sticking point for many people, remind yourself of the theme of the story: it's the journey, not the destination, that is important. (It's very meta that way.)
20 people found this helpful

Beverley EyreReviewed in the United States on September 4, 2013
5.0 out of 5 stars
One of the best, deepest movies ever made.
Verified purchase
If you've read some of the other reviews you'll know right off that "Joe vs the Volcano" is not easy to classify. To some, like me, it has profound depths, and speaks of life as a human being on a level few (if any) movies can achieve. To others it has no quality at all and is a waste of time to see.

I have to say, though, that I've never met or heard of anyone who 'gets' Joe (i.e. knows what it's about, sees the symbolic nature of the people and events, knows it is talking about the deep issues of life) and hates it. All those whom I've met who don't like it also don't get it. They think it's a comedy, a love story, a 'light-hearted' film; all the things it's not. 'Joe' is everything that Ingmar Bergman ever wanted to say, but failed to say because he didn't know how to.

JVTV is about, to quote Joe, courage. The courage to face life, to face down the fear that prevents you from being the person you know in your heart you are. It's about facing life with what life requires to be happy and fulfilled.

When Joe was young he had the courage he needed. He was a firefighter. He ran into fires to rescue children and save people from the most painful death. Then he lost his courage and got a job selling "rectal probes". He always felt sick, seeing doctor after doctor until one told him the bad news: he was dying.

Joe accepted the diagnosis, and this set him free from his fear. The worst had happened, nothing more to be scared of. He's going to die soon. His last task is to live well for the short time that remains. He is offered a few days of unlimited wealth and freedom if he agrees to leap into a volcano afterwards in order to help a businessman clinch a contract with superstitious natives. Joe accepts.

Through a series of mishaps, Joe discovers what life is and what it requires. One memorable scene is when he is cast adrift on a raft, and, almost dead from exposure, watches a glorious Moon rise over the ocean. He's says, "Thank you God, I've forgotten how BIG...." when he collapses.

When, finally he is standing on the lip of the volcano, ready to leap, the woman he has fallen in love with says:
"Joe, nobody knows anything. We'll take this leap and we'll see. We'll jump and we'll see. That's life."

This is the message of the movie. Nobody knows the future. Nobody knows what will happen. There is always risk. The only thing we can do is have courage, and leap. Those who don't leap are forever on the sidelines, watching those who have chosen to live. In essence, the message of Joe is: To leap is to live.

I haven't spoiled the movie. There are many many parts that contribute and support the message. At one point Joe says, "I've come a long way on a crooked road to find you." The "crooked road" is a lighting-bolt like symbol that occurs frequently in the film. Watching for it is fun. Why are there ducks everywhere? Why is Joe always losing his hat? Why is Meg Ryan playing 3 characters (hint Joe is always telling the new Meg Ryan character: "I think I've seen you before."). Why doesn't Joe sleep? Why is Patricia 'soul sick'?

There are so many things happening on so many levels it's hard to keep up.

This is a movie for people who want to participate in the art experience. That's the difference between art and entertainment. Art requires the audience to think, to see, to participate. Entertainment just need someone to watch and react: "laugh at this, laught at that."

Joe vs the Volcano is for the elite of movie watchers. Sorry, but it's true.
55 people found this helpful

P2 Avid ReaderReviewed in the United States on July 5, 2020
5.0 out of 5 stars
I'm not a fan of either actor -- but this is earlier in their careers and a FUN ROMP, VERY CLEAN
Verified purchase
I'd forgotten how fun this movie is. Meg Ryan plays multiple parts of different socialite sisters -- and it is very funny. Joe has the job from hell -- and is duped into jumping into a volcano to appease local natives into signing a contract. It is all classic good fun and a clean movie.

I do fast forward through the first part of the film because it is so depressing. A good time to make your popcorn in the other room while listening to the film!!

Copy is via Amazon Streaming and does fine with high speed ethernet cable.
One person found this helpful

GCHerringReviewed in the United States on March 1, 2016
5.0 out of 5 stars
A classic funny family movie
Verified purchase
Fabulous movie, with my favorite movie duo-Tom Hanks and Meg Ryan. They have fantastic chemistry on the big screen. The hilarious adventures of a depressed man. Fantastically written. Meg Ryan plays several characters throughout the film.
I don't remember anything obscene, it is definitely a family movie that parents and children will enjoy together. They just don't make movies like this much anymore, quirky, funny and clean.
Family movie, wish Tom and Meg would make more movies like this
11 people found this helpful

Amazon CustomerReviewed in the United States on May 16, 2021
5.0 out of 5 stars
great movie
Verified purchase
This is my favorite movie of all time. So awesome how Meg Ryan plays three different characters in the movie, and each having a very different personality. The whole movie is very fun, and entertaining. If you want something that is realistic - something that actually might happen - this is NOT your movie. If you want something fun, that has something funny in virtually every scene - this is for you

S. SnodgrassReviewed in the United States on July 6, 2020
5.0 out of 5 stars
My favorite Tom Hanks film!
Verified purchase
I’ve watched this film so many times I have it memorized. It’s a wonderful, though comically far-fetched story about a sad sack who finds meaning in life after giving up. Hanks is terrific, as are the cast of great costars, including Meg Ryan, Lloyd Bridges, Ossie Davis, Abe Vigoda, Nathan Lane, Carol Kane and others. Meg Ryan brilliantly portrays three different characters! The soundtrack is wonderful too, especially the haunting love theme. HIGHLY RECOMMENDED!
See all reviews
Back to top
Get to Know Us
Make Money with Us
Amazon Payment Products
Let Us Help You
EnglishChoose a language for shopping. United StatesChoose a country/region for shopping.
© 1996-2021, Amazon.com, Inc. or its affiliates