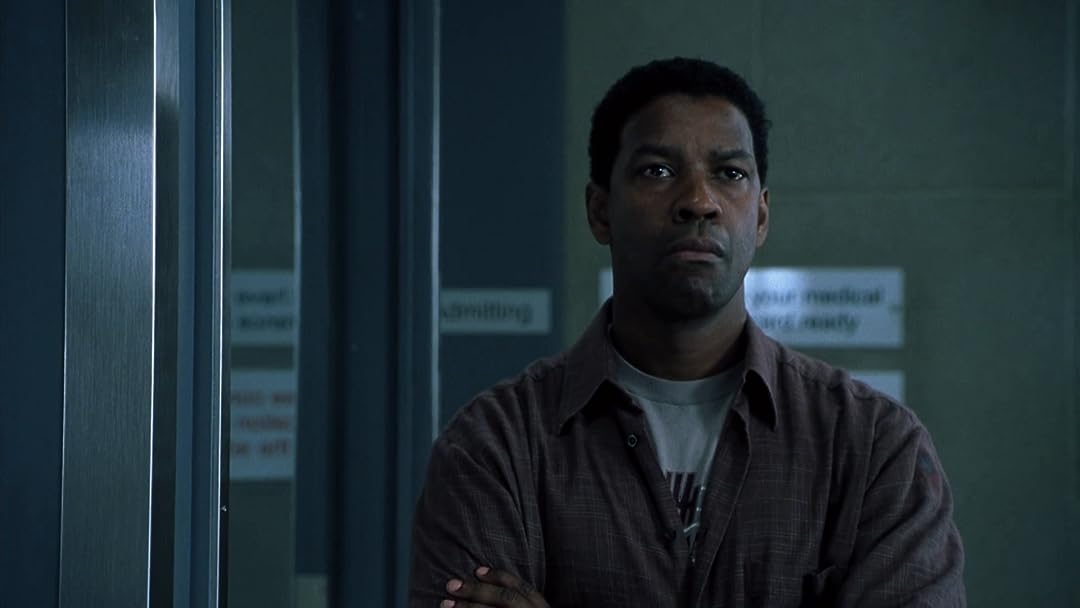 (3,280)
7.11 h 56 min2002X-Ray16+
Denzel Washington stars as John Q, a man whose young son needs an emergency heart transplant. When he discovers his insurance won't cover it, he will do anything to keep his son alive.

Christina ReynoldsReviewed in the United States on August 4, 2020
4.0 out of 5 stars
Denzel was Made For This Role
Verified purchase
John Q. is a 2002 American thriller drama film starring Denzel Washington and directed by Nick Cassavetes. The film tells the story of John Quincy Archibald (Denzel Washington), a father and husband whose son is diagnosed with an enlarged heart and finds out he is unable to receive a transplant because HMO insurance will not cover it, before he decides to hold up the hospital and force them to do it.

The pace pf this film is appropriate given the amount of build-up that is needed to justify John deciding to take the hospital hostage in order for his son to have the operation he needs. In this same note, however, this film would have been even more successful if the audience was given some clue to the fact that john was considering a hostage situation in the first place. It's not completely unrealistic mind you, but the tone shifts from showing John "trying to do the right thing" (and failing) to being prepared to shoot hostages to get what he wants with very little elaboration on what changes for John internally to make this happen. This certainly doesn't take much away from this film, but it''s just something worth taking note of.

Denzel Washington is made to have roles like the one in this film; he's the perfect amount of gritty and 'soft', so his characters are well-rounded and easy to enjoy or even relate to. His acting is grounded and doesn't depend on exaggerated fluctuations or gestures, and this works to keep the audience engaged and curious about what he plans on doing next. I would go as far as to say that this is one of Washington's best performances, and that's saying something given his impressive repertoire up to this point in time.

Lastly, this movie has real world applications in the context of accessibility to healthcare. It is a well known fact that healthcare favors the rich and often leaves those in poverty at the mercy of professionals willing to give care without compensation - something that becomes increasingly harder to find as time goes on. 'John Q', in this way, is a fantasy for those that have no issues receiving proper health care and a dream come true for those that can relate to this struggle. The brief compromise between these two communities (the haves and the have-nots) is nothing short of social commentary and action and is valuable as such.

A heartwarming story with real world applications
I would recommend!

Dan R BerkabileReviewed in the United States on October 3, 2021
5.0 out of 5 stars
Things not real
Verified purchase
Right at the first of the movie the way the accident happened to the woman who got hit was unreal. My first thought was you don't go into a passing lane when contemplating passing a truck around a turn where you can't see oncoming traffic. Nobody does that unless they're drunk.
Then the hospital administrator tells Q's wife that she put her son on the list, but why doesn't that information filter on down to the police lieutenant (Robert Duvall) before the 5:15 pm deadline. It comes later, but the sniper still inters the hospital and shoots and wounds Q with no consideration of his son being on the list which should change that decision. Then Q elects to give his heart to his son by killing himself. Then there's all these scenes where the gun doesn't go off because it was on safty followed by another try and not answering his wife calling on the radio phone even to excluding what happened next leaving the audience wondering what did happen. Clearly, this was all was staged in the movie's production to create more drama, but the audience can see right through it.
The woman killed in the accident is flown in and she gives her heart to save Q's son which reveals the reason for her death at the beginning. But there are so many ways to cause someone's death than an unreal car accident. Finally, the guilty verdic on kidnapping was rediculous. He should have been found not guilty on all three charges. The movie is rated 5 stars, but because of these flaws it should be rated more like 4 and a half stars, but this cannot be designated above.

joel wingReviewed in the United States on July 10, 2020
4.0 out of 5 stars
Health care system fails Americans
Verified purchase
John Q starred Denzel Washington as a father pushed to the edge by the fact that he couldn’t get a life saving operation for his young son Mikey. The movie focused upon working class people who are living paycheck to paycheck who don’t have adequate insurance. It’s a story about the system failing people like John and his family.

The villains in the film are the hospital bureaucracy and the company John works for. An administrator tells the family that their insurance doesn’t cover heart surgery. That means they will have to pay cash for their son’s care which they don’t have. The alternative is to just let their son die. Then John’s work tells him that because they cut his hours and they changed insurance they won’t cover Mikey’s health care. That forces the family to go to government agencies and the insurance company and they get denied over and over. This is the system failing the family.

The movie of course goes to the extreme with John’s actions but it highlights the health care crisis that America faced at the time. Denzel provides another great performance and the ending is a gut wrencher. Combined with the message that made John Q one hell of a movie.
C
2 people found this helpful

Sharon StephensReviewed in the United States on March 28, 2021
5.0 out of 5 stars
I love True Story movies
Verified purchase
This is a true story about a little boy that fell while he was playing baseball and his family did not have adequate insurance ComEd they wanted the boy to live but the hospital wanted him to go home and die. This movie should be watched by everyone. It just story of love, Hope and Faith in something but only God can make right in the end.
2 people found this helpful

neognomicReviewed in the United States on April 6, 2020
3.0 out of 5 stars
Just average waste of time, at best
Verified purchase
Predictable yet so slow getting to what one already knows is going to happen, in general if not specifically, that it is tedious and boring.
Might be the worst work Mr. Washington has ever done. Certainly the worst I have seen. Completely unconvincing. Kimberly Elise was worse. Duvall, Woods and Liotta were more interesting, most of the time. ...
...idunno. Maybe it was the director or something going on on the set. I mean stupid stuff like having the gun action work(click) when the safety is on is a pretty major oversight. Or having a 200+ lb male sniper crawl along a hanging ceiling ... ridiculous.
I'll never rent it again, not even for a buck, ...and wish I had not spent a buck on it.
One person found this helpful

Ismet KhanReviewed in the United States on July 14, 2021
5.0 out of 5 stars
Underrated film!
Verified purchase
This is a hidden gem of Denzel Washington's. Perfectly encapsulates the flaws of the American medical system and the ending was very realistic. I empathized so hard for his son and rooted for their whole family throughout the movie. An amazing watch! Also, the purchasing process for this movie through Prime Video was simple.

flo pagReviewed in the United States on September 27, 2020
2.0 out of 5 stars
Not very good
Verified purchase
As a kid I thought this movie was so deep and emotional. Now that I'm grown I realize how awful it is. The situation the characters are in isn't very simpathy inspiring. Denzel's performance is great but it's a pretty dumb, simplistic movie
2 people found this helpful

kcanelReviewed in the United States on April 1, 2018
5.0 out of 5 stars
John Q
Verified purchase
This movie was riveting. Denzel' s acting was phenomenal. I'm not much of a movie goer,so the ending was fresh for me. A real tear jerker. A loving father who will stop at nothing to save his child.
5 people found this helpful
See all reviews
Back to top
Get to Know Us
Make Money with Us
Amazon Payment Products
Let Us Help You
EnglishChoose a language for shopping. United StatesChoose a country/region for shopping.
© 1996-2021, Amazon.com, Inc. or its affiliates