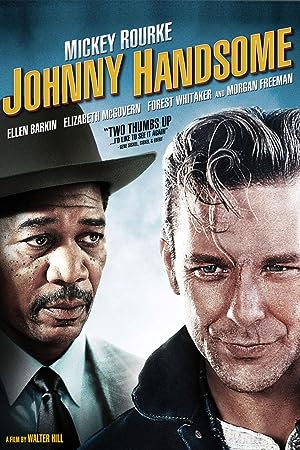 (397)
6.11 h 33 min1989R
Born with a horribly disfigured face, and unable to become part of "normal"society, John Sedley turns to a life of crime. But his two fellow gang members trick him and Johnny is sent to prison. There he meets a plastic surgeon who takes sympathy on him and surgically transforms him into a new man. Now unrecognizable to those who once new him, the once ugly duckling plots a vicious revenge.

Dr. DeathReviewed in the United States on January 24, 2019
5.0 out of 5 stars
The Three Worlds of Johnny Handsome
Verified purchase
I remember seeing this film in the late 80's on videotape and I enjoyed it immensely. Gritty and noirish, the director tells the story of a small time with an unforgettable face and a crime that went wrong almost from the get go. Excellent casting here as Mickey Rourke is Johnny Handsome, the mug with a mug that is painful to look at. You also have Ellen Barkin looking dangerous as well as Lance Henricksen being the baddest boss man in New Orleans. Walter Hill delivers the goods in this story of a double cross that gets reversed. Excuse the sappy ending however this is pulp film making at its finest. They don't make them like this anymore!
10 people found this helpful

J. STEVENSONReviewed in the United States on February 20, 2021
3.0 out of 5 stars
VIOLENT
Verified purchase
The worst part of this movie is Elizabeth McGovern. Her "southern accent" is laughable. The story follows Mickey Rourk and his criminal career after receiving life-altering surgery to reverse his facial birth defects that made him look like a monster. Ellen Barkin was the most duplicitous, violent woman who I have ever seen in a movie. The story involves a gang of misfits pulling off a multi-million dollar robbery. I saw this movie in the theatre when it first came out. I have no idea why I thought I needed to own it. Mickey Rourk was good.

Joey HirschReviewed in the United States on December 4, 2013
5.0 out of 5 stars
The Big (Un)Easy
Verified purchase
Johnny Handsome is a horribly disfigured hanger-on in a gang of lowlifes about to pull off a heist. Without giving away too much of the plot here, things go wrong and Johnny ends up on a chain-gang. While imprisoned, he is selected as a candidate for reconstructive surgery, which will give him a new, beautiful face. He will also be granted a conditional parole. The film's noirish dilemma centers around whether Johnny and his new face will go straight, or whether he will in fact seek revenge on the thugs who did him wrong, who, thanks to his surgery, no longer recognize him.

This is a latter-day noir masterpiece, far too low-key, grimey, and pessimistic to get the respect it deserved the first time around, but thanks to Amazon, maybe it is now getting the reappraisal it richly deserves. If memory serves correctly, Roger Ebert was one of the few critics to understand how good this thing was during its initial run.

Director Walter Hill was on a tear in the late 70s until the mid 80s (with a certain revival period in the 90s, when he dipped his toe into the Western Genre). This movie features several actors at the peak of their powers, including Morgan Freeman (before he was typecast as a good-natured, paternalistic friend (i.e. in "The Bucket List" or "Shawshank Redemption"). Ellen Barken and Lance Henriksen are suitably over the top, and Forrest Whitaker inhabits his character with compassion and sensitivity. The only possible weak link is a miscast Elizabeth McGovern doing a painfully bad Cajun/Creole accent. The city of New Orleans (previously featured in Hill's "Hard Times" with Charles Bronson) is also a strong presence throughout. The Big Easy is almost another character in this film, especially during the graveyard shootout at the end.

ProfDonReviewed in the United States on June 26, 2013
5.0 out of 5 stars
A 'must have' movie
Verified purchase
This film noir manages to fall short of greatness and yet it should not be overlooked given the performances of most of the major players. Mickey Rourke uses his chiseled features to give us a preview of his stellar 'misunderstood bad-ass' role in Sin City, Forest Whitaker does his hand-wringing missionary doctor thing to perfection, and the great Morgan Freeman shows us a great tightrope act as the super-cynical cop who balances nicely between opportunistic sleaze and tender-hearted simpatico. Ellen Barkin and Lance Hendrickson leave no doubt about their sleaze factor and do so very convincingly. And of course Elizabeth McGovern is perfectly cast as the "discarded sweetheart", though her bayou accent is just a little over the top. Taken on its own Johnny Handsome is maybe nothing more than an okay black movie but the performances of these six taken in the context of their filmographies makes this a 'must have' in the library of any serious film aficionado.
4 people found this helpful

Clarence E. Jones IIIReviewed in the United States on September 20, 2002
5.0 out of 5 stars
A wonderful forgotten film
Verified purchase
'Johnny Handsome' is one of the finest mystery-suspense films of the past 20 years.Start with Mickey Roarke's performance.Yeah,I know:"Mickey Roarke?""Wild Orchids"Mickey Roarke?But,I promise you,this is "Diner"Mickey,where all the next-great-actor hype came from.As Johnny,a horribly disfigured young man getting by in the worst parts of New Orleans,Roarke is superb.Through a series of bad decisions,he ends up nearly beaten to death on a chain gang,& is saved & given a new face & a new life by a doctor played by Forrest Wittaker.What he does with that chance is at the heart of this film,& worth every second.Director Walter Hill uses the old 30's-40's technique of quick cuts to reactions instead of showing us gratuitous violence.He keeps the pace going without losing track of the plot,a miracle these days.And with a cast also including Ellen Barkin,Lance Henriksen(a Powerful Performance!),and other pros,'Johnny Handsome' is a delight to watch again & again.This is truly a hidden treasure of 80's cinema.Check it out!
7 people found this helpful

Hee Chul KwonReviewed in the United States on December 10, 2015
4.0 out of 5 stars
PRETTY GOOD FILM
Verified purchase
I saw this movie a long time ago.
Now that I saw it again, it's way better then I thought.
The story is well built, Mickely Rourke's acting was well done.
DVD is stereo but the format is 4:3. which is pretty sad.
But my dvd player can do pan& scan so it was ok.
The story is a fast going so I was pretty surprised how 1:30:00 flew that fast.
Walter Hill is a pretty good director. He made movies like 48 Hours.

PS: it's good to see Elizabeth McGovern again. She is in the movie ONCE UPON A TIME IN AMERICA. And this is the second time seeing her again.
3 people found this helpful

Gail LV06Reviewed in the United States on November 23, 2021
3.0 out of 5 stars
Interesting Premise But Underdeveloped
Verified purchase
This movie is just okay. Slightly boring with a predictable ending. Characters themselves seemed not particularly interested. At least I had the pleasure of seeing Mickey Rourke before he got his face totally plasticated.

Ann M. RayReviewed in the United States on February 2, 2013
5.0 out of 5 stars
johnny wicked handsome
Verified purchase
way back when this movie first came out, i so wanted to go see it. my now ex husband who i was dating then promised, i mean promised he would take me to see it.......never happened (should have taken that as a sign). it had to been around about a week, because it was not playing when a friend and i planned to go. i was heartbroken. too me mickey rourke is such a gifted actor. i am sooooo glad he is back in action. when i got this movie, you don't know how excited i was to see it after all these years. thank you mickey rourke and thank you amazon!!! i don't care what anyone says, mickey is the best!!!!! always will be!!!!
his portayal of his character was fantastic! wonderfully done. mickey rourke does have a gift.
3 people found this helpful
See all reviews
Back to top
Get to Know Us
Make Money with Us
Amazon Payment Products
Let Us Help You
EnglishChoose a language for shopping. United StatesChoose a country/region for shopping.
© 1996-2022, Amazon.com, Inc. or its affiliates