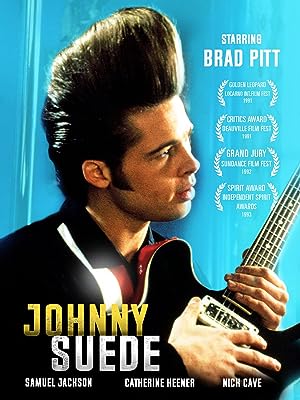 Rita S.Reviewed in the United States on March 10, 2021
5.0 out of 5 stars
Still My All-Time Favorite Pitt Film
Verified purchase
I gotta admit, this one nearly got dethroned by "Once Upon A Time In Hollywood", but, if you watch this one really closely, you will totally "get" where the Hollywood stunt double character emerged from. You don't see the manscaped ball-dozed "Brangelina" in this one. You don't even see Brad Pitt in this one. You are so mesmerized by the character of Johnny Suede that you forget all about Brad Pitt. It's shocking that Catherine Keener gives a better performance in this one than she did in "Being John Malkovich."First time I saw this one I thought it was another Jim Jarmusch film. You look at something like this film and you don't have to wonder why in the hell they don't make them like this anymore. Once in a blue moon.

Thomas M. SiposReviewed in the United States on September 13, 2004
5.0 out of 5 stars
An odd, unique, affecting film
Verified purchase
JOHNNY SUEDE does what indie films do best. It presents an odd, unique vision that's tough to describe or market. (A similar oddball film is THE LAST BIG THING).

The film takes place in Brooklyn, but you wouldn't know it unless you read the credits. It's not the recognizable Brooklyn of Spike Lee, or Woody Allen, or John Travolta. With the sparse sets and anachronistic pop music costumes (of Darlette, Johnny, and Freak) I wasn't even sure about the time period. Sometimes it seems to be set in a surreal alternate realm (like STREETS OF FIRE).

Johnny is a musician who plays retro rock, but his huge pompadour hair is so buffonish, one wonders if he's not meant as a caricature, a joke that no one quite gets. Then one sees Freak Storm in the same hair, and one wonders again if we're in an alternate realm in which this is a common style. (We see the same bizarre hair in TROUBLE IN MIND, and that film was indeed set in the near future.)

Like STREETS OF FIRE, JOHNNY SUEDE draws you in. You can't try and figure out this film, you just have to accept it on its own terms and enjoy the ride.

The music is excellent. I wish they'd release a soundtrack, though it seems they never have.

I disagree with a comment that said that everyone takes advantage of Johnny. I see it as largely the other way. Johnny is a parasite and sloth. (1) Deek tries to help him with getting a real job, and even lends him money. Johnny shows no gratitude. (2) Johnny turns down a music gig because it goes against his artistic sensibility to perform without a bassist, even though the other band members are ready and willing to go ahead. Then Johnny complains that it's the others who are no help. (3) Not wanting to work, Johnny comes up with the idea of robbing a barber shop. Deek does the work of getting the gun, but Johnny flakes out. (4) Yvonne is a devoted girlfriend, cooking for Johnny, baking him a birthday cake, buying him a shirt, and Johnny only cheats on her in return. (5) Johnny is behind on his rent, so he's also taking advantage of his landlord. (6) And Johnny tries to take advantage of Darlette's music business mother. Sure, she also wants to bed him. But does that let Johnny off the hook?

Ultimately, JOHNNY SUEDE is fascinating to watch, occassionally funny (especially Freak Storm), with great music. But it's also a depressive film. These people do not live great lives, and there's no bright future ahead. All they have is their youth, which allows them to dream. What will happen when they're no longer young?

Johnny is happy only because he's too dense to know better, his vision of reality obscured by his dream world. However, there's a hint of hope at the end, in that he apologizes to Yvonne and loses his shoe (the latter perhaps symbolizing his budding maturity).

I've seen this film several times. Well worth a look for fans of oddball indie films.

someguyReviewed in the United States on September 18, 2017
5.0 out of 5 stars
Terrific movie, fine dvd edition.
Verified purchase
If you're going to buy Johnny Suede, this is the version to get. Not only does this edition have a very enjoyable director's commentary, but it's also two minutes longer owing to the inclusion of a short scene that was omitted from the theatrical version of the film.

GP WizardReviewed in the United States on May 13, 2016
4.0 out of 5 stars
It's not an easy to digest movie
Verified purchase
It's a movie that require time, you have to watch it at least twice to understand how the adventures of our Johnny are so inconclusive. It's not an easy to digest movie, the stories are narrated with weird pictures, images, scenes and with small sound effects but it all make sense.. eventually.
One person found this helpful

Unlikely LikelyReviewed in the United States on September 13, 2017
4.0 out of 5 stars
Johnny B Pretty Goode
Verified purchase
There were times when the acting wasnt all that great, some parts didnt make sense, and I would have written a couple of the plot lines different. But thats the thing, I didnt write it and I got to be an observer. It had a surrealistic feel to it, but at the same time was relatable and real. There was a coolness to it. I mean hell, Samuel L made an appearance for a scene. And a weirdness. And it cracked me the fack up a few times. Initially I was kinda displeased at the end but once I dwelt on the fact it doesnt matter what I think, I dug it a bit more.

Jonathan PfefferReviewed in the United States on November 11, 2020
5.0 out of 5 stars
Rockin Sensational
Verified purchase
Great comedy. I rented it several times and decided to just collect it. Has funny unforgetable parts and is dramatic as well.

kei.Reviewed in the United States on December 10, 2011
5.0 out of 5 stars
Great Brad Pitt flcik that should have been promoted better
Verified purchase
[[ASIN:B000YDBP2K Johnny Suede]] This is a great movie, even better if you listen to the writer's commentary. It's worth buying, but may be hard to find as it was not released in theaters nationwide when made. Don't be fooled by Pitt's hair on the cover - this story takes place some time around the Punk/Glam era. Anyone who has good memories of that period will probably enjoy this. Some of the music was written by the film director/writer himself and recorded but hard to find. If you're a Brad Pitt fan you'll definitely like it. If you were ever a struggling musician you'll identify with it. Johnny has an odd obsession with Ricky Nelson music and other vintage things - but he's still a musician, songwriter and struggling to have a band. Amusing story about the shoes he wears, how he got them and what they did for him, the era such a person is living in, how he got his name and the fact that this is all based on things that occurred during those years of the writer's life. The soundtrack is fitting and even if it's not your fave type of music you'll still like it in this film. This movie is fun, interesting and has great acting. It's too bad it wasn't promoted more when made. It's enjoyable and shouldn't be over-thought, as it can be misunderstood and seem not quite as good. If you don't want to buy it, at least try to see it. Made around the time fo Thelma and Louise, Pitt was not well known but you can still see his acting potential and he plays this part well. Different people will like it for different reasons, nevertheless it's still a "feel good" movie for me.
2 people found this helpful

Melanie WillardReviewed in the United States on September 6, 2017
4.0 out of 5 stars
Not meant to be realistic
Verified purchase
This movie is a fantasy. Not meant to be seen as anything other than a boys ' dream. A nightmare,even. Don't watch it with expectations of sanity. Enjoy Brad Pitt in a role that Is suited for him. He's falling apart and we get to fall apart with him. If you can laugh at yourself, Enjoy! If you don't know how to fall apart, don't watch this movie.
See all reviews
Back to top
Get to Know Us
Make Money with Us
Amazon Payment Products
Let Us Help You
EnglishChoose a language for shopping. United StatesChoose a country/region for shopping.
© 1996-2021, Amazon.com, Inc. or its affiliates