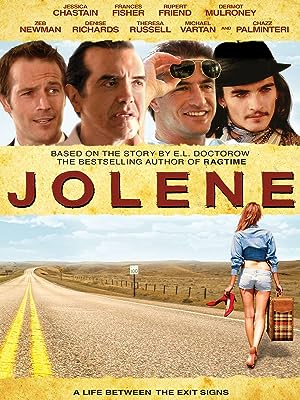 (383)
6.42hR
At the age of fifteen, Jolene, a free-spirited orphan, embarks on a decade-long cross country adventure.

Liam D EsteppeReviewed in the United States on November 20, 2017
5.0 out of 5 stars
Intoducing Jessica Chastain, the movie had me at that.
Verified purchase
GREAT!! Not for the faint of heart. But you'll survive it, it is art after all, not a guidebook for life or a slam on values. I wish reviewers would review movies based on the fact that they are an art form. If you are offended by it, maybe that could be a good thing, but these negative reviewers before me dissed great performances and nuanced storytelling because they need Disney all the time. Do they read the rating, or synopsis before hand?

Do not watch movies that say there is sex and violence, and then give them a bad review because they have sex or violence. There was nothing gratuitious in this movie. It tells a story. A phenomenal story of survival, a rough journey packed with colorful yet dark charactors.

And Jessica chastain is stunning. She put incredible beauty out there and makes watching the journey she is on worth watching. I think her charactor is heroic as she goes through what she does over a 10 year period between age 15 and 25. Brava!! Whatever she goes through, and you may not like seeing it, she survives it and as the story ends ... well you need to watch through and call it yourself. I don't do spoilers.

Vault DwellerReviewed in the United States on February 28, 2019
1.0 out of 5 stars
Do NOT waste your time!!!
Verified purchase
Started rough and got worse from there. Typical mysoginistic, rambling tale sprinkled generously with gratuitous nudity, child molestation, sexual victimization, and abuse. It is the dysfunctional male's wet dream. Choose something else.
30 people found this helpful

Adam ChurvisReviewed in the United States on December 13, 2018
2.0 out of 5 stars
What, you call that an ending, you schmuck?
Verified purchase
It was five stars until the camera ran out of film before a proper ending could be filmed and someone just yelled out "That's a wrap!" before they reloaded the film. Only slightly less ridiculous than typical endings in Chinese films where the actors jump off a cliff and take flight with the birds, or something else that is supposed to distract us from the lazy writing. I love Jessica Chastain, and this movie had a lot of potential, but every film needs a beginning, a middle, and an end, and yes, two out of three IS bad. Very bad. Maybe next time the writer can edge me for two hours and then just walk out the door without saying a word. Maybe they can borrow $200 from me and promise to pay it back by Tuesday and then never do. Or maybe before they again commit the high crime of wasting a viewer's time, they could take Robert McKee's Story seminar and learn how to write that ending.
17 people found this helpful

kathrynReviewed in the United States on November 11, 2018
1.0 out of 5 stars
Plot is hideous. Script could be chopped up and at any given point become the story line for porn
Verified purchase
Awful awful awful. Narrative is the very limited choices of a beautiful young woman, who of course becomes ensnared in every single man's sexual fantasy who crosses her path. The disfunction is debilitating and dangerous for any young teenage girl....because of course this adds to her internal conditioning that this is what it means to be female. The ending could not be more delusional. She becomes pregnant by an abuser who later takes her child away, so she goes to Hollywood to become an actress. Repeat..
17 people found this helpful

Amazon CustomerReviewed in the United States on May 13, 2018
5.0 out of 5 stars
Sad But Truthful
Verified purchase
An honest look at a young woman who is smart and talented but doesn’t realize her own worth due to the abuse and lack of parental connection she’s endured. The story is harsh yes, but it is also a very blunt example of relationship choices people tend to make after going through a childhood like Jolene’s :(. This movie took me through a variety of emotions. One minute I am feeling frustrated and disappointed in Jolene for allowing herself to be taken advantage of by such trash people, the next minute I’m feeling sad for her because
SPOILER ALERTS AHEAD........................

the only guy who treated her well ends up getting murdered. I was straight up pissed at her when she decided to marry the last guy when he was obviously a psychotic piece of shit who told her she smelled like “warm milk”, illegally fired her, and was rude to everyone in the proximity as well. However, I understand that his character and her choice to marry him existed to make a statement regarding how people with poor self worth with settle for WAAAAAAYYY less than what they deserve.
14 people found this helpful

Susan J. KresslerReviewed in the United States on July 27, 2018
4.0 out of 5 stars
SPOILERS. Continuity problem.
Verified purchase
Overall, a very good movie and the acting was superb. There was just one thing that really bothered me and that should have been addressed. SPOILER ALERT AHEAD.....

Sam said she would be taken care of when he was gone. He also said he never broke his promises. Given how much he loved her, it seems to me that he would have left instructions with someone he trusted. He would have had her found and kept his word.

That's how I was expecting the movie to end. With her being given some power and the ability to fight for her son. I was disappointed by the lackluster conclusion.
13 people found this helpful

joshuaReviewed in the United States on August 21, 2020
4.0 out of 5 stars
Wow Just Wow!!
Verified purchase
What a trip this one is. Making movies based on prose novels is not an easy thing. I would bet even the book was more immersive than this film, (similar to The Red Tent) but for what it's worth, this one had me hooked. It Chronicles 10 years in the life of a young woman simply named Jolene, who after a childhood of being raised in the foster system is emancipated early and forced to grow up in a world that throws a plethora of curve balls at her in regards to life especially relationships, whilst trying to make a life for herself. Each partner she hooks up with reads like chapters in a book some hilarious, others shocking, others gruesome and ending in a clinging of hope. There's a voiceover in the film's ending where Jolene states that dsspite being 25 she is younger than she looks in potential actress roles, and i would say it's an almost self critique of the actress that portrays her, Jessica Chastain's performance was just amazing, she plays the almost naive impressionable teenager quite well, in the first half of the film, and with every partner encounter you could see her mature slowly but surely into a woman that always bounced back despite the utter madness of her stories. The partners she hooks up with can be a separate review and it's quite a bunch. All I can say is, some are tragic, some are creepy, some are hilarious, some turn out Heavenly at first making the crash to reality all the more painful, but the last and sixth one is quite a whiplash, starts off comedic but immediately takes a dark turn, and wouldn't you know, it involves a Christian, who turns out to be the slimiest, most entitled, arrogant, pretentious, disgusting, weak, monstrous pile of pig excrement ever imagined, he is the one I can describe here, because he struck an angry cord to me, and I just could not be quiet about it. Ladies, if you ever meet a man like this, keep your radar up, and if your gut is telling you to run away, run far away and never look back.
All in all, quite a Rollercoaster ride of a film, hilarious, creepy, dramatic, dark, and a little hope sprinkled in. Not for the faint of heart.

Ps I imagine the book is a little better.
One person found this helpful

romantic ladyReviewed in the United States on April 30, 2018
5.0 out of 5 stars
Beautiful, poignant movie
Verified purchase
A moving and poignant film about a young girl's turbulent life, with all its ups and downs, based on a short story by E.L. Doctrow. This was Jessica Chastain's debut as an actress, and her performance was outstanding; she was luminous. Due to its poignant, bittersweet nature, it's not always an easy film to watch, but it's definitely worth it. Powerful and moving. Highly recommended.
13 people found this helpful
See all reviews
Back to top
Get to Know Us
Make Money with Us
Amazon Payment Products
Let Us Help You
EnglishChoose a language for shopping. United StatesChoose a country/region for shopping.
© 1996-2022, Amazon.com, Inc. or its affiliates