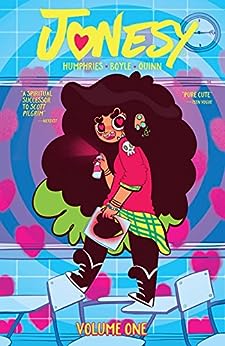 by Sam Humphries (Author), Caitlin Rose Boyle (Artist) Format: Kindle Edition
Book 1 of 3: Jonesy
See all formats and editions
Sorry, there was a problem loading this page. Try again.
Jonesy is a self-described “cool dork” who spends her time making zines nobody reads, watching anime, and listening to riot grrrl bands and 1D simultaneously. But she has a secret nobody knows. She has the power to make people fall in love! Anyone. With anything. There’s only one catch—it doesn’t work on herself. She’s gonna have to find love the old-fashioned way, and in the meantime, figure out how to distract herself from the real emotions she inevitably has to face when her powers go wrong. Collects issues #1-4.
Read more
Previous page
Next page
Kindle e-Readers
Fire Tablets
Free Kindle Reading Apps
Available on these devices
Next 3 for you in this series See full series
Total Price: $20.97
Books In This Series (3 Books)
Complete Series 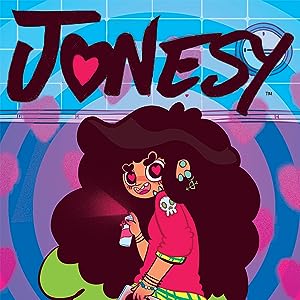 Gr 6 Up—This volume collects the first four issues of the colorful comic. Jonesy is a self-described "cool dork," who makes zines that nobody reads, watches anime, and listens to riot grrrl bands. She has also recently discovered that she has the power to make others fall in love. The teen uses her abilities to varying effect, often leaving chaos in her wake. In the first issue, she receives a white flower instead of the much-sought-after pink flowers on Valentine's Day. Popular girl Susan makes fun of her, and after some advice from her abuelita, Jonesy decides to get even. Eventually, the two frenemies become true friends, especially as the title character tries to get the girl Susan is crushing on to love her back. The secondary characters, such as Jonesy's doughnut-making, joke-cracking father and her relentless, not-so-clueless principal, are memorable. The absurd stories are reminiscent of the high jinks—filled classic "Archie" comics, and the Technicolor art, filled with hearts and magenta-tinged hues, elevates the comical but sometimes cheesy narrative. While this has the makings of a fun series and the intersectionality of the protagonists will resonate with readers, the book sometimes straddles the line between mocking and paying homage to adolescent girls. Still, the heroine, with her voluminous hair and baggy clothes, is an unforgettable, highly expressive, and mostly charming protagonist. VERDICT Fans of Adventure Time, Steven Universe, and "Lumberjanes" will gravitate to the rambunctious, star-crossed Jonesy. A general purchase for most YA and upper middle grade graphic novel collections.—Shelley M. Diaz, School Library Journal --This text refers to the paperback edition.

Sam Humphries is an American comic writer best known for his work on Marvel's Secret Wars, including Star-Lord and Kitty Pryde, Guardians of the Galaxy and X-men: The Black Vortex, and Legendary Star-Lord, as well as BOOM! Studios classic, Fanboys vs. Zombies.

A newer talent on the comics scene, Caitlin Rose Boyle holds a BFA from Carnegie Mellon University's School of Art.  She also co-wrote and co-directed "Buck n' Lou & the Night Crew," a 2014 Nickelodeon Animated Short, and has contributed to Monkeybrain Comics' "Amazing Forest" anthology.  --This text refers to the paperback edition.

Theodora Patterson
5.0 out of 5 stars Absolutely Perfect!
Reviewed in the United States on December 15, 2018
Verified Purchase
Jonesy is exactly what I'm looking for in a comic book hero, funny, and full of heart.

SUJEONG PARK
5.0 out of 5 stars Five Stars
Reviewed in the United States on March 30, 2017
Verified Purchase
My friend asked me to buy it. It was cheaper than Barn......
Read more
One person found this helpful
Helpful
Report abuse

Jtweems
1.0 out of 5 stars whaaaaaat?!
Reviewed in the United States on September 12, 2019
this book caught my eye. My kindle put it in my "recommended for you on kindle unlimited" and since there were so many good views I read it.
DO. NOT. READ IT.
don't call me a hater, this is the first 1 star review I've ever gave a book.
but a girl who uses her love powers to make people fall in love for fun? or for her own advantage? who's best friend, susan, has a crush on another girl? and her crush is a popstar? not to mention she has no respect for her father or anyone else. I wanted to like this book

The Hermit Librarian
3.0 out of 5 stars Jonesy is a Cupid-like character who has the ability to make people fall in love with other people
Reviewed in the United States on March 16, 2017
Jonesy caught my eye because the color and the style reminded me so much of the television show Steven Universe. While as far as I know neither creator has nothing to do with the show, this book has its own humor and shine.

Jonesy is a Cupid-like character who has the ability to make people fall in love with other people, things, ideas, etc. Some of these matches are much more successful than others. Many have consequences that force Jonesy to confront her view on the subject and figure out how to make things better or whether to meddle again when she has the potential to make things even worse. There's no indication yet where her powers come from, whether they're passed down from a family member or spontaneously bestowed upon her, but she's certainly making use of them since discovering them accidentally when shipping two characters on t.v.

The weird thing about Jonesy is, even though she's described in the summary of the book as being a fan of anime and a devotee of grrrl bands and 1D, I didn't really get that from her in this book. She mentions anime once or twice, watches an unnamed show once, but she never mentions anything specific about anime, like a favorite character or movie or show. It is the same with her musical tastes. The only musician that I saw mentioned was a fictional one called Stuff, whose persona is that of an alien on the planet Earth, playing music for humans. It might be a callback to an early David Bowie persona, but I didn't get that vibe either. I'm hoping her interests will be demonstrated more in future books because volume 1 seemed to be all about her powers and how she misused them.

Speaking of her misuse of power, it is this that brings me to a point about Jonesy that annoyed me during the course of the book. Her age is never stated outright, but from the description of the school and school events, like a Valentine's Day flower sale for charity or prom, it's easy enough to figure out that she is somewhere in high school. My guess would be 16 or 17. However, based on her actions throughout the book, I would've pegged her age as much lower at best without these context clues.

She acts like a sixth grader, if that, in terms of her selfish nature regarding helping her father and using her ability to make others fall in love with anyone/anything. While each chapter featured an escapade in which Jonesy screwed something up and a subsequent reversal of her opinion about said event, I can't help but feel like she's not learning much of anything yet. I feel like, if she were actually a teenager, she'd have at least a modicum more of sense in regards to these situations.

On the positive side, there is a lot of diversity in this book. The main character, Jonesy, comes from a Hispanic family (her abuelita, who appears briefly, is hilarious!). Her new BFF Ginger is not only a Black woman, but a gay woman whose love interest features in one chapter. There are other side characters that appear that have the potential to be brought forward as time goes on, including Jonesy's other friend Farid (about whom not much is known).

I might have another look at this series and I'd definitely recommend giving it a try, though I'd probably put this in the column of checking it out from the library first to see whether or not it's up your alley.

I received a copy of this book from the publisher via NetGalley in exchange for an honest review.
Read more
2 people found this helpful
Helpful
Report abuse

MsRCreation
4.0 out of 5 stars Interested to see where it goes
Reviewed in the United States on August 18, 2021
I love the art. It’s bright and fun. The plot is silly and enjoyable and the characters are the same. It’s blurbed as similar to Scott Pilgrim which I see but it needs a little more to get you attached to the characters like with Scott Pilgrim. Interested to see where it goes in the next volume.
Read more
Helpful
Report abuse
See all reviews