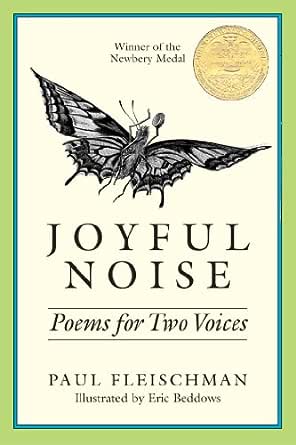 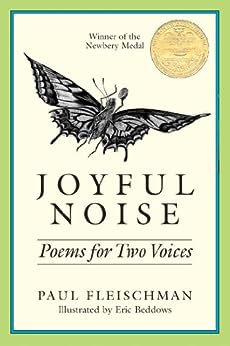 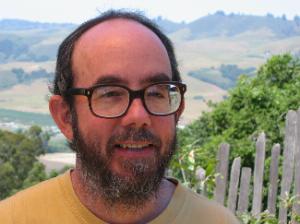 An Amazon Book with Buzz: "The Second Home" by Christina Clancy
"A sure-footed ode to the strength of family, the depth of loss, and the power of forgiveness." - J. Ryan Stradal Learn more
click to open popover

Winner of the 1989 Newbery Award, Joyful Noise is a children's book of poetry about insects that was designed for two readers to enjoy together. On each page are two columns of verse for children to alternate reading aloud about the lives of six-legged creatures ranging from fireflies writing in the sky to a love affair between two lice, crickets eating pie crumbs and the single day in the life of a mayfly. Charming large scale soft-pencil illustrations enhance the comical, easy-to-read text.

Grade 3 Up In this collection of 14 ``Poems for Two Voices'' about insects, Fleisch man surpasses its companion volume, I Am Phoenix (Harper, 1985). He has com bined the elements of sound and meaning to create clear, lively images of a variety of insects. Elements of repetition, ono matopoeia, and alliteration are effectively used to create a character for each of these creatures, with fireflies ``Flickering, flitting, flashing'' and mayflies ``lying, dy ing,'' which make these poems a joy for reading aloud. In addition, elements of personality, both fictional and real, are presented with charming effect. The love lorn moth who yearns for the lightbulb and the book lice who overcome their differing ``tastes'' represent the lighter side, while the digger wasp's reflection on the home it digs for children it will never see and ``Re quiem,'' written for the victims of ``Fall's first killing frost,'' represent real beha viors. Beddows uses personified black- and-white drawings to capture the feeling of the poems, including a sultry queen honeybee reclining on her couch. This book can join Bugs (Viking, 1976) by Mary Ann Hoberman and Never Say Ugh! to a Bug (Greenwillow, 1979) by Norma Farber as proof that insects are indeed the stuff of poetry. Barbara Chatton, Col lege of Education, University of Wyo ming, Laramie
Copyright 1988 Reed Business Information, Inc.

In resonant voices and striking use of language, this 1989 Newbery Medal-winner explores the various sounds and concerns of the insect world. All ages.
Copyright 1992 Reed Business Information, Inc.

Written to be read aloud by two voices--sometimes alternating, sometimes simultaneous--here is a collection of irresistible poems that celebrate the insect world, from the short life of the mayfly to the love song of the book louse. Funny, sad, loud, and quiet, each of these poems resounds with a booming, boisterous, joyful noise.

In this remarkable volume of poetry for two voices, Paul Fleischman verbally re-creates the "Booming/boisterious/joyful noise" of insects. The poems resound with the pulse of the cicada and the drone of the honeybee. Eric Beddows′s vibrant drawings send each insect soaring, spinning, or creeping off the page in its own unique way.

A clear and fascinating guide to the insect world--from chrysalid butterflies to whirligig beetles-- and an exultant celebration of life.

"A companion to I Am Phoenix, this marvelous, lyrical evocation of the insect world demands accolades." -- --H.

"A companion to I Am Phoenix, this marvelous, lyrical evocation of the insect world demands accolades. With subjects ranging from grasshoppers to butterflies, there is variety in tone, mood, and theme. There are fourteen poems in the handsomely designed volume, with wonderfully interpretive illustrations. Each selection is a gem, polished to perfection." -- H.

Paul Fleischman's novels, poetry, picture books, and nonfiction are known for innovation and multiple viewpoints. He received the Newbery Medal for Joyful Noise: Poems for Two Voices and a Newbery Honor for Graven Images, and he was a National Book Award finalist for Breakout. His books bridging the page and stage include Bull Run, Seek, and Mind's Eye. For the body of his work, he's been the United States nominee for the international Hans Christian Andersen Award. He lives in California. www.paulfleischman.net.

Eric Beddows was born and raised in Ontario, Canada. He illustrated Shadow Play and the Newbery Medal-winning Joyful Noise and its companion, I Am Phoenix (the latter under the name of Ken Nutt), all by Paul Fleischman. He has many one-man shows of his art and received numerous grants and awards for excellence. Other children’s books he’s illustrated include The Cave of Snores by Dennis Haseley and Who Shrank My Grandmother’s House? by Barbara Juster Esbensen. He lives in Stratford, Ontario.

4.7 out of 5 stars
4.7 out of 5
104 customer ratings
How does Amazon calculate star ratings?
Amazon calculates a product’s star ratings based on a machine learned model instead of a raw data average. The model takes into account factors including the age of a rating, whether the ratings are from verified purchasers, and factors that establish reviewer trustworthiness.
Top Reviews

Mona Larrow
4.0 out of 5 stars Poems for Two Voices by Paul Fleischman sounds like a gospel hymnal my grandmother would have carried to ...
Reviewed in the United States on December 13, 2014
Verified Purchase
It's not everyday that a book about bugs delights me, but put bugs describing their lives, poetry, and vivid pen and ink drawings into a collection and there's definitely a winner!

Joyful Noise: Poems for Two Voices by Paul Fleischman sounds like a gospel hymnal my grandmother would have carried to church each Sunday, but after glancing at the cover, you will find that those sounds come from nature's creation, called insects.

This poetry collection boasts 14 of the most adorable poems, all spoken in the voices of the bugs they represent, all to be read aloud with someone- sometimes one at a time, sometimes simultaneously- all in the merry tradition of Frere Jacques, an elementary school classic.

Joyful Noise celebrates natures insect world from the water strider who "whenever we're asked/ we walk upon water" to the book lice "who dwell who dwell/ in these dusty bookshelves." My favorite of all the poems in this book, however, was 'Chrysalis Diary.'

Paul Fleischman has created a wonderfully unique book that could be used in a variety of ways. As a workshop creator, I see writing and art possibilities, using the poems as spring boards for creativity for almost any age group.

The teacher in me sees Mr. Fleischman's book as an opportunity to make learning fun by having youth research the insects they are most drawn to, creating the perfect presentation/study project, and working across multiple subjects to maximize learning potential.

And as a poetry lover, well, as a poetry lover I see the lives of wonderful insects jump off the page through renga-like poems, with sing songy verse and lively drawings, brought to life by two voices, reciting aloud, in perfect harmony.

Whether you are looking for poems moving enough to touch your heart, or funny enough to make you giggle your sadness away, Joyful Noise: Poems for Two Voices is amazing and should be the one poetry book no home is without!

Windy
5.0 out of 5 stars Fun for the Whole Family
Reviewed in the United States on October 19, 2017
Verified Purchase
We are a family of home schoolers and we love poetry around here. We do poetry tea time once a week and this book has been a great addition to that. The poems are great and it's so much fun to be able to make it interactive like this. Definitely a keeper!
Read more
4 people found this helpful
Helpful
Comment Report abuse

Kat Weglarz
5.0 out of 5 stars Bugs are awesome
Reviewed in the United States on August 9, 2018
Verified Purchase
I would never have thought of writing poetry about bugs but Flieschmann not only thought about bug poetry, he wrote it and the insights he had are fabulous. The cicada poem was my favorite. I want to hear these poems read.
Read more
3 people found this helpful
Helpful
Comment Report abuse

JayBofMA
5.0 out of 5 stars A great tool to encourage children to read poetry
Reviewed in the United States on December 19, 2013
Verified Purchase
My wife came upon this book years ago when she was teaching fourth graders. They all really took to reading its poems as they enjoyed being able to stand with a classmate and recite the verses together. My wife has had it prominently displayed in her office, now that she is a principal, so that little hands can take it up when they visit or otherwise spend time in the Principal's Office. And many do take this up. But her copy is soft cover, and is a little worn and with a cover that no longer lays flat. So I was pleased to find the book in hardcover so that it might look more inviting with age.
Read more
3 people found this helpful
Helpful
Comment Report abuse

Emily Prior
5.0 out of 5 stars Good poem book
Reviewed in the United States on April 24, 2019
Verified Purchase
5/5 stars

This book has many stories within the poeoms you read. It is great to read and use for special education.
Read more
One person found this helpful
Helpful
Comment Report abuse

Gladys Landing-Corretjer
3.0 out of 5 stars It is a good book to build fluency
Reviewed in the United States on June 21, 2019
Verified Purchase
I like that the poems are short, and very useful to help children build reading fluency.
Read more
Helpful
Comment Report abuse
See all reviews from the United States

Denise Grant
4.0 out of 5 stars Joyful Noise - poetry
Reviewed in the United Kingdom on August 1, 2013
Verified Purchase
This is great for a minibeast topic, esp since New Primary Curriculum wants us to learn poems by heart! Ideal.
Read more
Helpful
Sending feedback...
Thank you for your feedback.
Sorry, we failed to record your vote. Please try again
Report abuse

Susan Davis
5.0 out of 5 stars More fun than board games!
Reviewed in Canada on January 23, 2017
Verified Purchase
More fun than board games ! Reading can be a social activity. Fun for two people to read together; by yourselves, even more fun in a group. When I was teaching, my teaching partner and I would give dramatic (!) recitations to our students. They soon caught on and started to adapt poems in this and other favourite books to present their own readings to the class. You can adapt the parts to even more voices and have a voice choir, too.
Read more
Helpful
Sending feedback...
Thank you for your feedback.
Sorry, we failed to record your vote. Please try again
Report abuse