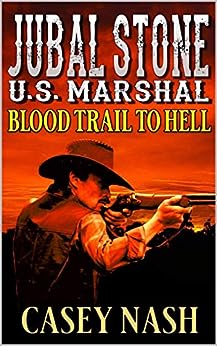 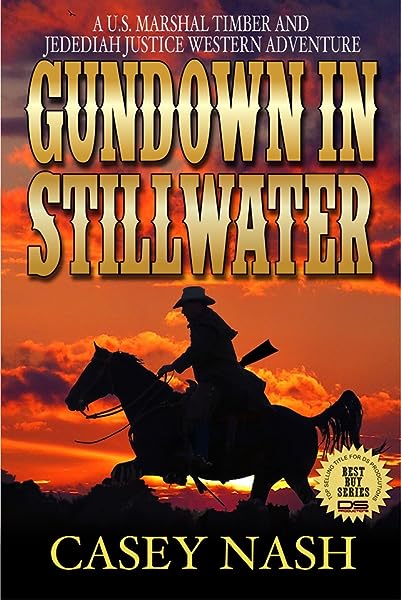 by Casey Nash (Author) Format: Kindle Edition
Book 1 of 32: A Jubal Stone: U.S. Marshal Western
See all formats and editions
Sorry, there was a problem loading this page. Try again.

A brand new crime-fighting western series from Casey Nash has arrived! This is “Jubal Stone: U.S. Marshal” and if you’re a criminal—he’s coming to get you!

The frontier was no place to hang your hat if you were a coward or weakling, and sometimes even the strong and brave fell victim to the violence that stalked the land and plagued this new and untamed country. Such was the case with Sheriff Joe Stone and his family.

Joe was a man’s man from his narrow-brimmed hat down to his tarnished iron spurs. He had a hickory spine and anvils for fists. A lawman for over twenty-five years, Joe Stone split his time as a Texas ranger and sheriff, keeping law and order in frontier towns all over the Texas territory. Yet, because of the incessant pleadings from his wife, Millie, and his own desire to live a more tranquil life, Stone checked his badge, hung up his shootin’ iron, and took up raising cows and a few head of horses. Together, with their daughter and son, they were committed to make a go of it, and had started well.

With two-and-a-half decades behind the star, Joe, like other lawmen with his tenure, he had plenty of enemies. Unfortunately, the last who tried achieved their mission. Four killers showed up at his ranch one day, bank robbers recently released from prison, men Stone had put behind bars. They ambushed Joe and his family, shooting them down like dogs.

However, the assassins made a grave mistake that fateful day. They failed to confirm that fourteen-year-old Jubal, shot and left for dead, was indeed dead. Now, eight years later, Marshal Jubal Stone wears a badge of his own. A .44 Colt sits low on his hip in a dark brown, well-worn leather holster latched down to his leg, both gun and holster his pa’s.

Now behind a United States Marshal’s badge, Jubal Stone will show no mercy when he crosses paths with killers, highbinders, and outlaws foolish enough to challenge his authority.   He’s curry combing the frontier in search of his family’s killers, but in the meantime, he will mete out justice along the way.

Casey Nash grew up in the south loving the west. Cowboy runs through his veins. In the summers, it’s not uncommon that he goes missing: out West to work cattle, write novels, and just catch up with himself. Nash loves hunting, fishing, spending time with his family, and just being outside every chance he gets. He and his wife have a small farm in South Alabama. His first book is called "Gundown At Stillwater." You'll love it!

Great
5.0 out of 5 stars Very great book!!!
Reviewed in the United States 🇺🇸 on November 29, 2022
Verified Purchase
I have read as many books by this auther as I could find. I have enjoyed them alp. Great book.
Read more
Helpful
Report abuse

Kindle Customer
5.0 out of 5 stars Great Western adventure
Reviewed in the United States 🇺🇸 on October 31, 2022
Verified Purchase
Loved how this young man never gave up. He was an amazing young man. I would highly recommend this book to anyone interested in the wild west.
Read more
Helpful
Report abuse

Kindle Customer
5.0 out of 5 stars Very good book
Reviewed in the United States 🇺🇸 on October 10, 2022
Verified Purchase
Enjoyed reading your very good book.I hope there will be a sequel to see if he got back with the Women from Louisiana. Keep riding good clean books I will start another 1 now
Read more
Helpful
Report abuse

Kay Manning
4.0 out of 5 stars great!
Reviewed in the United States 🇺🇸 on July 14, 2022
Verified Purchase
I have throughly loved every book in this series. I find Jubal a wonderful hero, full of fire, compassion and strength. I have read all the series and now back to number 1, and go through them again. Great reading!
Read more
Helpful
Report abuse

History student
4.0 out of 5 stars A good read
Reviewed in the United States 🇺🇸 on July 13, 2022
Verified Purchase
Rating 4.5

Kindle Customer
4.0 out of 5 stars 1st time
Reviewed in the United States 🇺🇸 on June 7, 2022
Verified Purchase
I have read anything by Casey Nash. A Nice storyline if not a bit predictable. I will enjoy reading more of the series to see how the series progresses.
Read more
Helpful
Report abuse

Kindle Customer
4.0 out of 5 stars Very Very Good
Reviewed in the United States 🇺🇸 on January 29, 2022
Verified Purchase
This was my first book by this author, but it Wii not be my last. I can't wait to read the next book. Keep up the good work Casey Nash.
Read more
Helpful
Report abuse

Jane
5.0 out of 5 stars Excellent
Reviewed in the United States 🇺🇸 on June 16, 2022
Verified Purchase
Just a really well written story with a character you want to succeed. Cannot wait to read more of this western saga
Read more
Helpful
Report abuse
See all reviews

J. M.
5.0 out of 5 stars Western Fan
Reviewed in the United Kingdom 🇬🇧 on September 4, 2021
Verified Purchase
As I have been a fan of westerns for a lot of years but have found good ones hard to come by for a few years now and having got a good one at Christmas thought I would see what was on offer in kindle and found the jubal stone ones I have just read the first one in series and if the rest are as good I'll be a very happy reader brilliant read would highly recommend it to any fans of westerns
Read more
Report abuse

DavidT
5.0 out of 5 stars Great read.
Reviewed in the United Kingdom 🇬🇧 on January 4, 2023
Verified Purchase
This is a good read.
Can't wait to read the others. Reminds me of the great stories of Louis Amour
Read more
Report abuse