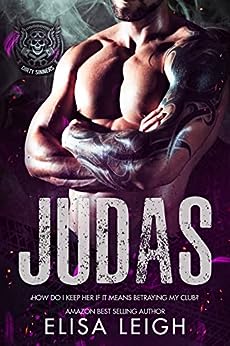 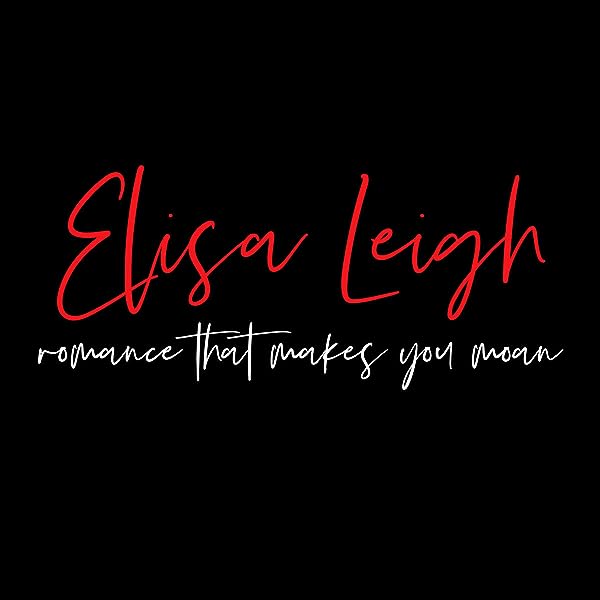 by Elisa Leigh (Author) Format: Kindle Edition
Part of: Dirty Sinners (18 books)
See all formats and editions
Sorry, there was a problem loading this page. Try again.
After Justin "Judas" West spent time in the Army, he came home needing something to center him again. With no family tying him down, he joins the Dirty Sinners MC, a club in a rival town from where he was born, and is finally able to steady himself. He's bent over backward for years, trying to prove himself to his club, but there are still a few brothers who question his loyalty. He wants to be an Enforcer for the club, and he's almost there, all he needs is for the officers to vote him in.

Then he meets Maddy, a beautifully broken disaster that needs him in every way possible. Only she's not someone he can be caught with, let alone claim as his. She's the sister of his rival club, and going anywhere near her will undo the years of work he's invested into his club. He's not willing to risk losing the only family he has left.

Staying away from what he wants most has never been a strong suit for Judas. All it takes is one night and he's all in with Maddy, but he has to ask himself, "How do I keep her if it means betraying my club?"

This September, 18 of your favorite authors take you to the mountains of Haven, Tennessee. This small town is known for its wild times, alpha men and the Dirty Sinners MC—a group of rowdy hellraising bikers who don’t have a problem getting their hands dirty in order to do good. Crime, passion and the forbidden temptation of love will push them all to the line.

Will they ride through life craving soulmates as their penance for the crimes they’ve committed? Or can a Dirty Sinner be saved?

Elisa Leigh writes dirty talking alpha men who are rough, possessive, and totally in love with their women. Elisa promises with every book she writes, to give you a sometimes sweet and always steamy love story that will end with a Happily Ever After!

Pwnstar
4.0 out of 5 stars A-okay Judas!
Reviewed in the United States 🇺🇸 on September 26, 2022
Verified Purchase
I really liked Judas as a person (even though he is fictional!) He stuck to his morals and did what he thought was right and in my book that makes him okay in my books no matter what. 😍😍 I'm glad they got their HEA. As Maddy deserved it and so much more!
Read more
Helpful
Report abuse

Lisa T Jung
4.0 out of 5 stars Judas
Reviewed in the United States 🇺🇸 on October 6, 2022
Verified Purchase
Justin is about to make Enforce when he meets his angel. But she part of the enemy club and saving her might cause problems. Another good book.
Read more
Helpful
Report abuse

Carolyn Buckner
5.0 out of 5 stars Judas: Dirty Sinners
Reviewed in the United States 🇺🇸 on October 4, 2022
Verified Purchase
This book 📖 was truly a good read. It captivated your attention from beginning the end. There was suspense, heroes, romance, love 💕, passion, danger, and excitement in this story. The camaraderie in The Dirty Sinners Series is off the Chain. Most definitely would recommend this book 📖.
Read more
Helpful
Report abuse

Marti
5.0 out of 5 stars A Quick Read MC Novella
Reviewed in the United States 🇺🇸 on October 7, 2022
Verified Purchase
Judas met his love while working and was able to rescue her and then claim her within hours all to protect her from the rival club in Peril. Lucky for the couple it was love at first sight. This storyline is a great addition to this series.
Read more
Helpful
Report abuse

Kathy S Malin
5.0 out of 5 stars great story
Reviewed in the United States 🇺🇸 on September 24, 2022
Verified Purchase
This was a great book with a wonderful love story. Judas was a big strong Alpha with a soft gooey center. Him and Mandy were a great couple. The story had lots of action, plenty of heat and a good HEA.
Read more
Helpful
Report abuse

S. Flachsmann
4.0 out of 5 stars Maddy and Judas
Reviewed in the United States 🇺🇸 on October 21, 2022
I liked this one. This series has been so dang good and this was no exception. I was a bit worried about this one as Judas is mentioned in previous books in not such a good way with the other members of the MC. I think his book delivered and it was great to get his POV. Maddy was the perfect fit for him. I love that these characters seemed real. Very enjoyable.
Read more
Helpful
Report abuse

Bookfiend
4.0 out of 5 stars Innocent
Reviewed in the United States 🇺🇸 on October 2, 2022
Maddy is an innocent who gets caught up in her step brothers MC when her mother dies. He takes her in but treats her poor. She has tir ed of age and it is getting harder to keep the guys and her brother away. She is assigned ad a designated driver for a Bachelorette party. They end up at a club that turns out to be ran by a rival MC. Maddy catches one of the guys attention when one if the regular customers harassed her. Will he save her fro. The night and the situation she is living g in. I loved Jusad and Maddy. They were a perfect match. Great addition to the series.

I received an early copy of this book via Booksprout and am voluntarily leaving a review.
Read more
Helpful
Report abuse

kanani
4.0 out of 5 stars So good!
Reviewed in the United States 🇺🇸 on September 28, 2022
I really enjoyed this story. Judas has been a member of the Sinners for several years. Maddy is the sister of a rival club member. They met when Maddy was forced into taking a few women to an exotic club where Judas works security. This was a good story with a great HEA.
Read more
Helpful
Report abuse
See all reviews

Marie P
4.0 out of 5 stars She's everything he wants, but can't have
Reviewed in the United Kingdom 🇬🇧 on September 22, 2022
Verified Purchase
Judas has finally found his Angel but he must wait for her to come to him before he can claim her. Maddy has been beaten down and abused for years, she lives in total fear, until the night she feels what real life and death fear really is, but instead of crumbling as everyone expects, she finds her spine, she fights back. She surprises herself as much as anyone else when she suddenly and decisively defends herself...everyone that is except Judas. He knows how strong, how clever and how special she is, he may want to claim her but he also respects and cherishes her, which is heartwarming to see.
However, there are a number of typos which are frustrating as they totally change sentences. For example 'I was every inch of my body' this should be wash but I had to reread it a couple of times to work it out. Also 'Does she have anything she needs to covered?' I am guessing this should be either 'needs to get covered' or 'needs covered' so we are either missing a word or have an extra word, again confusing.
I read this on Kindle Unlimited.
Read more
Report abuse