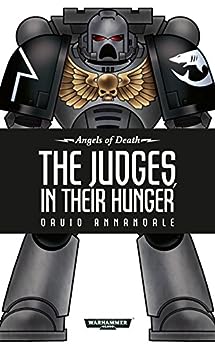 The Judges, In Their Hunger (Angels of Death) Kindle Edition

by David Annandale (Author) Format: Kindle Edition
Book 10 of 28: Angels of Death
See all formats and editions
Sorry, there was a problem loading this page. Try again.

On Sendennis, Imperial rule has fallen. Governor Bellasun cowers in fear of the new rulers of the world, the judges of the Flawless Host, fallen Space Marines whose appetite for luxury exceeds even his own. But Imperial forces are on their way in the form of the savage and bloodthirsty Space Marines of the Carcharadons.

Read it because
It's a Chapter who you don't see in prose often, in a tale told in a most unusual way.

Interstellar Vagrant
5.0 out of 5 stars Ten pages of mayhem
Reviewed in the United States on July 27, 2018
Verified Purchase
Pretty much cannot say anything more without giving the story away. Very short but excellent story. Worth th?e price, deserves will give stars.
Read more
Helpful
Report abuse

Melnik
5.0 out of 5 stars Perfection vs. Rage
Reviewed in the United States on April 30, 2020
Sendennis has fallen to the Flawless Host. As Lord Commander Lord Nathaniel Bellasun makes a choice that would decide the fate of Sendennis and its populace, Space Marines from the Carcharodons arrive to end the traitors.

A micro-short story, The Judges, In Their Hunger uses its limited word count to full efficiency. Told in third-person point-of-view, it keeps close to Bellasun. Through his thoughts, the reader sees the splendor of the Flawless Host and the rage of the Carcharodons, allowing the reader to see why the implied final verdict is cast.
Read more
Helpful
Report abuse
See all reviews

Mr R Allwood
4.0 out of 5 stars Short and sweet
Reviewed in the United Kingdom on December 9, 2018
Verified Purchase
It was a good quick read which summed up the Astra Carcharodons perfectly the only disappointment was that I wanted more
Read more
Report abuse
See all reviews