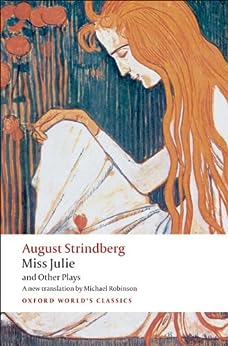 `Ibsen can sit serenely in his Doll's House,' Sean O'Casey remarked, `while Strindberg is battling with his heaven and his hell.'

Strindberg was one of the most extreme, and ultimately the most influential theatrical innovators of the late nineteenth century. The five plays translated here are those on which Strindberg's international reputation as a dramatist principally rests and this edition embraces his crucial transition from Naturalism to Modernism, from his two finest achievements as a psychological realist, The Father and Miss Julie, to the three plays in which he redefined the possibilities of European drama
following his return to the theatre in 1898. Michael Robinson's highly performable translations are based on the authoritative texts of the new edition of Strindberg's collected works in Sweden and include the Preface to Miss Julie, Strindberg's manifesto of theatrical naturalism.

Introduction Textual Note Bibliography Chronology Explanatory Notes
ABOUT THE SERIES: For over 100 years Oxford World's Classics has made available the widest range of literature from around the globe. Each affordable volume reflects Oxford's commitment to scholarship, providing the most accurate text plus a wealth of other valuable features, including expert introductions by leading authorities, helpful notes to clarify the text, up-to-date bibliographies for further study, and much more.
Read more
Previous page
Next page
Kindle e-Readers
Fire Tablets
Fire Phones
Free Kindle Reading Apps
Read with the free Kindle apps (available on iOS, Android, PC & Mac), Kindle E-readers and on Fire Tablet devices. See all supported devices


Michael Robinson is Professor of Scandinavian Studies at the University of East Anglia.
--This text refers to an out of print or unavailable edition of this title.

C. M Mills
TOP 500 REVIEWER
5.0 out of 5 stars August Strindberg s greatest plays are included in this Oxford Classics Edition
Reviewed in the United States 🇺🇸 on April 9, 2015
Verified Purchase
August Strindberg (1849-1912) was born in Stockholm to a shipping clerk and a maid. He was a complex and tortured genius excelling in poetry, essay and novel writing as well as painting. Strindberg lives in literature most importantly through his plays. In this new Oxford Classics edition of five of his plays translated from the Swedish by Michael Robinson we see the Nordic genius of Strindberg in full flower. The plays range from the naturalism of The Father and Miss Julie to the expressionist work of his later works such as The Dream Play and Dancing With Death. Strindberg is no Pollyanna as he found life a frightening hellish experience of human tragedy. The plays included are":
The Father-A strong battle between a long married couple the Captain and Laura. He wonders aloud if his daughter Bertha is his while his wife Laura succeeds in sending him to a mental institution for his perceived madness. The play evinces the misogyny of Strindberg which this reviewer finds personally repugnant!
Miss Julie-This is Strindberg s greatest play. In it we see a young woman Julie who has been raised as a boy to a decaying aristocratic family fall in love with Jean a lowly but bright servant. All of the action takes place on the estate of Miss Julie on Midsummer s Eve night. The play explores the theme of class and the war between the sexes. Miss Julie is a dark tragedy.
The Dance of Death portrays a marital couple who hate and love each other at the same time. The play foreshadows such later works as Edward Albee s Who';s Afraid of Virginia Woolf as it shows an old married couple in conflict.
A Dream Play-An expressionistic work of one act in which various voices speak in poetry and prose. Strindberg s third wife a famous actress starred in the first production.
The Ghost Sonata-A student has his strings pulled by old Hummel a personification of the Devil. The play is reminiscent of Faust by Marlowe and Goethe.
I like the naturalistic plays much better than the expressionistic dramas. Strindberg s major themes are":
a. An assertion of male power over the weaker female.
b. The belief in the survival of the strongest in a cold and indifferent universe . Social Darwinism run rampant!
c. The struggle between the classes of society
d. Human life in the madhouse of the world.
Strindberg is a dark artist who will not be to everyone s liking. The world is a cruel place and humanity is trapped in its mortality. Strindberg writes with passion and many of the plays emerge from the situation of his own life situation. His preface to the play Miss Julie is included in this edition and is well worth reading.
Read more
2 people found this helpful
Helpful
Report abuse

wendybird
4.0 out of 5 stars Complex, interesting collection of plays
Reviewed in the United States 🇺🇸 on January 17, 2019
Verified Purchase
5 stars for Miss Julie, 4 stars for A Dream Play, and an uncertain 3 stars for The Father, Dance of Death, and A Ghost Sonata.

I actually consider myself quite good at reading plays, they often play out quite well in the theater of my imagination. My inner director takes the suggestions of the writer into consideration, but ultimately does her own thing. For example, August Strindberg, in his prologue to Miss Julie, seems to think I should portray the title character as the poster-child of all things wrong with the fairer sex. I'm sorry, Mr. Strindberg, but in my production, the troubled, naive heiress comes across as a multi-faceted individual with deeply personal issues, not some broad brush-stroke symbol meant to stand in for all womankind. The twisted, ever-reversing relationship between Julie and her father's footman Jean is compelling in its own right, but I never for a moment imagined it as shorthand for ALL relationships between men and women everywhere. Because I believe that's what you intended, from your prologue? No matter. Hollywood writers know that once a script is written, it's out your hands for the director to do as she sees fit.

I suppose I should spare a few words for the other plays (though if you just read one, make it Miss Julie). Strindberg likes to write from life, and the man of troubled marriages makes the troubled marriage and the wars of Mars and Venus a main focus of his work. He also likes the "vampire" theme--in this case, a character who sucks joy and energy from the people around him. The surreal "A Dream Play" serves as a reprieve from the usual bleak, claustrophobic atmosphere and shows instead god Indra's daughter descending to earth to learn about human misery. Despite this, I found it quite playful and even comical at times, what with the mystery of the locked door, the verbal sparring of the four Deans of knowledge, and the Lawyer who argues that one can never be happy, because one is always hungover and guilt-ridden the morning after.
Read more
3 people found this helpful
Helpful
Report abuse

Hey You
5.0 out of 5 stars Themes Of Different Nature
Reviewed in the United States 🇺🇸 on August 28, 2015
Verified Purchase
In the play, Miss Julie, by August Strindberg, there exist tensions of different levels on the nature of the relationships between Jean, a senior esteemed servant, and the female characters, Miss Julie, a daughter of a wealthy landlord and Kristin, a female mistress. One night, as the relationship between Jean and Miss Julie exceed to a different level, new ideas emerge on the tropes of gender roles, religion, and social classes. At the same time, it becomes essential to note how the tropes are dependent on each other and do not stand on rigid boundaries. In Strindberg's Miss Julie, Kristin unconsciously uses religion as a means of exploitation, hypocrisy, and authority. Strindberg, by focalizing religion through a “female mistress”, is able to blur the dividing lines between the social classes and display a direct link that exists between religion and femininity within the play.

Overall, a great play and Strindberg integrates many themes of love, religion, sexuality, relationships, social class in his naturalistic style of writing. The play is very unique in its nature and at times very dramatic and extreme in its contents and imagery and ends with much sadness, hence the name "dark tragedy". This translation is very clear and benefical and which greatly aided me in writing my final paper.
Read more
One person found this helpful
Helpful
Report abuse

Otto Minera
5.0 out of 5 stars Mx
Reviewed in the United States 🇺🇸 on March 10, 2019
Verified Purchase
It's what I needed.
Read more
One person found this helpful
Helpful
Report abuse

Staci
5.0 out of 5 stars Overall satisfying purchase.
Reviewed in the United States 🇺🇸 on January 26, 2013
Verified Purchase
Exactly what I wanted. Arrived promptly. Good translation and interesting introduction. Would definitely recommend to anyone wanting to read Strindberg for pleasure or for school.
Read more
3 people found this helpful
Helpful
Report abuse
See all reviews

Dave the book
5.0 out of 5 stars Value and quality
Reviewed in the United Kingdom 🇬🇧 on September 5, 2022
Verified Purchase
Strindberg is up there with Ibsen for dissecting the Scandinavian soul. This edition is the best value for money as well. Brilliant translations and four plays! Penguin has three for more money. My query to Penguin and OUP is why don't they offer more Strindberg volumes? Another recommendation for me was that Andrew Grahame Dixon quoted from this volume when discussing Strindberg's intimate theatre on his Art of Scandinavia series on BBC 4.
Read more
Report abuse

Mrs. Karen E. Burdis
5.0 out of 5 stars Great for those into theatre and plays
Reviewed in the United Kingdom 🇬🇧 on February 18, 2020
Verified Purchase
Brilliant!
Read more
Report abuse

Jade
5.0 out of 5 stars Miss Julie
Reviewed in the United Kingdom 🇬🇧 on August 16, 2013
Verified Purchase
As a play I really like Miss Julie. I haven't seen it performed apart from the DVD version, however as a female monologue I realy thinhk it is good. There is a lot to work with character wise for the monologue.
Read more
2 people found this helpful
Report abuse
See all reviews
Report an issue
Does this item contain inappropriate content?
Report
Do you believe that this item violates a copyright?
Report
Does this item contain quality or formatting issues?
Report