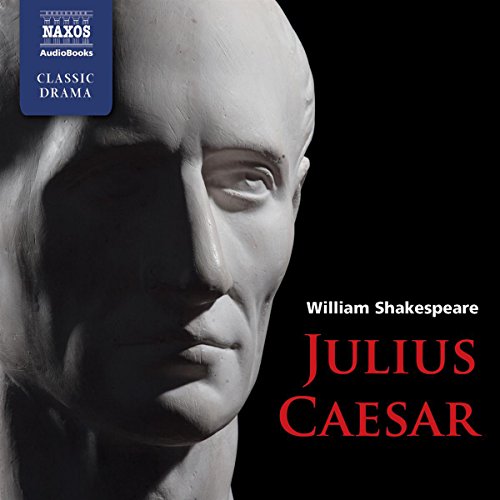 Julius Caesar is one of Shakespeare’s most compelling Roman plays. The plot against Caesar and the infamous assassination scene make for unforgettable listening. Brutus, the true protagonist of the play, is mesmerizing in his psychological state of anguish, forced to choose between the bonds of friendship and his desire for patriotic justice.

Special invitation from Audible!
Learn more about Membership
List Price: $12.59
You Save: $0.60 (5%)
By completing your purchase, you agree to Audible’s Conditions Of Use
Sold and delivered by Audible, an Amazon company
Share

4.6 out of 5 stars
4.6 out of 5
755 global ratings
How are ratings calculated?
To calculate the overall star rating and percentage breakdown by star, we don’t use a simple average. Instead, our system considers things like how recent a review is and if the reviewer bought the item on Amazon. It also analyzes reviews to verify trustworthiness.

Jeff R
5.0 out of 5 stars No line numbers
Reviewed in the United States on October 16, 2019
Verified Purchase
I’m an English teacher. I considered just buying a bunch of copies if I had to because the price is right (ended up that I didn’t have to).

It would have been totally fine for a class. There’s brief notes explaining difficult words and passages on the bottom of each page. Totally standard, really, except that for some reason there’s no line numbers.
Read more
6 people found this helpful
Helpful
Report abuse

Emily
TOP 1000 REVIEWER
5.0 out of 5 stars Great play, great value
Reviewed in the United States on July 27, 2020
Verified Purchase
It had been a few decades since I last read this play, and I wanted a refresher.

Honestly, I don't know why we push Shakespeare on kids. It's so much more meaningful in your 30's, 40's, 50's etc when you can better understand how sharp Shakespeare really was. At 14 Julius Caesar was meaningless and tiring to me. At 44 it's brilliant and so very relevant to modern times. I think it would be fascinating if everyone was forced to go through high school english lit at age 40 or so.

Anyway, for $3, this book did well as something I could read in the bath without concern for it getting wet.
Read more
2 people found this helpful
Helpful
Report abuse

Ayoeridani
5.0 out of 5 stars One word; Shakespeare!!!
Reviewed in the United States on February 18, 2021
Verified Purchase
There’s just no way to not appreciate Shakespeare. One should have a serious disdain for literature to not like Shakespeare. There’s nothing not to like about his ancient writing style. Even though his plays are old, they are still amazing, entertaining, and full of meaning.
He’s works will still continue to have an impact in future generations. He was just great at what he did.
Read more
Helpful
Report abuse

Me
2.0 out of 5 stars Funny
Reviewed in the United States on July 13, 2021
Verified Purchase
loved this play since hi school..funny story,,the school was mostly White,,but there was a black kid in drama,,when we did this play,,i went friends,,romans,,homies...all the White guys had wierd looks on their faces,,but my black friend just started laughing!!! This was in the 70s....I got an F..lol. never forget it
Read more
Helpful
Report abuse

Amazon Customer
5.0 out of 5 stars SPQR
Reviewed in the United States on June 3, 2019
Verified Purchase
Shakespeare’s play, Julius Caesar, is intriguing on more than one level. The populist, Caesar, is resisted by the patrician Senate to the point of execution. Though of noble birth the common people, the plebeians, loved him. Historically, he was opposed by Pompey Magnus , born a pleb, but supported by the patrician Senate. Ultimately, he is murdered by the noble senator’s themselves with the last dagger stroke provided by Brutus, whom he had mentored and treated like a son. A betrayal that resulted in a most awful, perpetual punishment in Dante’s Inferno. It is both a morality play and an illustration of human nature and psychology that is as pertinent today as it was when it was first written and performed almost five hundred years ago.
Read more
Helpful
Report abuse

chp
3.0 out of 5 stars No notes
Reviewed in the United States on August 31, 2021
Verified Purchase
Unlike one of the reviews, my edition does not have any notes or explanations, either on the bottom of the page or at the end. I bought this edition because I thought it had at least some brief notes. Just a warning.
Read more
Helpful
Report abuse

mgm1001001
5.0 out of 5 stars Very good choice for high school students
Reviewed in the United States on February 19, 2019
Verified Purchase
Ordered this item for my son. It's the complete text and is very lightweight which is important since he goes to a school that doesn't provide lockers and storage. It has proved itself to be durable because he is not gentle on his supplies.
Read more
Helpful
Report abuse

Edward Waters
5.0 out of 5 stars Movers and Shakespeares
Reviewed in the United States on August 9, 2005
Verified Purchase
Like du Maurier's Rebecca or Tolkien's Sauron, Julius Caesar is to the play which bears his name less a focal presence than a force largely off-stage which provokes the choices and actions of the more evident characters. Caesar does put in several brief appearances during the first three acts, but it is Marcus Brutus whose nobility, naivete, seduction, treachery, rationalization, and ultimate downfall make up the overarching plot. Shakespeare here avoids taking sides, however, and so provides us with a shrewd study in the diverse motives and attitudes that always precede insurrection, and in the chaos that inevitably follows.

As with most of the Arden series, this critical edition represents superior scholarship and valuable reader assistance. Its extensive footnotes should illumine most instances of unfamiliar language or allusion, and an Appendix provides relevant excerpts from Plutarch's LIVES, which Shakespeare consulted for many of his details. Those new to JULIUS CAESAR, however, are best advised to begin with the text of the play itself (in the volume's central section), saving the so-called 'Introduction' until afterwards; for Daniell's excellent discussion relies heavily on citations of the play's content, and his insights are apt to be lost on the reader who has, as yet, little or no frame of reference.

It should be noted, too, that the Arden Shakespeare editions are best suited to serious students and amateurs already acquainted with the Bard and aspiring to more advanced appreciation. Having come late to the field myself, I mean no condescension in suggesting that someone just setting out may find the wealth of material here a bit overwhelming. The potential rewards of Shakespearean discovery are incalculable, and it is always tragic when worthy ambition burns itself out, for want of patience, by attempting too much too soon. I began with more modest editions, such as the Signet Classics or Pelican, which I found very accessible and sufficiently annotated to provide the help I then needed. Arden, which has been issuing and revising its series since 1899, will still be around when one is ready for it.
Read more
5 people found this helpful
Helpful
Report abuse
See all reviews

Amazon Customer
1.0 out of 5 stars Defective item
Reviewed in the United Kingdom on December 20, 2020
Verified Purchase
Awfully defective item. Not to mention it took me nearly a month to receive the item, the one I received does no at all correspond with the description. The book is supposed to be 'used. like new', the one I received is nothing like that: the cover page is kind of worn out; there are notes running through the book; what's worse, there is even the last user's name written on the fore page!
Read more

1.0 out of 5 stars Defective item
Reviewed in the United Kingdom on December 20, 2020
Awfully defective item. Not to mention it took me nearly a month to receive the item, the one I received does no at all correspond with the description. The book is supposed to be 'used. like new', the one I received is nothing like that: the cover page is kind of worn out; there are notes running through the book; what's worse, there is even the last user's name written on the fore page!
Images in this review

Inkwork
5.0 out of 5 stars Brilliant
Reviewed in the United Kingdom on September 23, 2009
Verified Purchase
A wonderful introduction covering the many aspects of how and why Shakespeare's Julius Caesar has been staged through time; insight into Shakespeare's motives in writing the play set in context of the Elizabethan court and much more. The play itself is clearly set out with footnotes and further information at the back of the book. For study or purely personal interest it is well worth paying a bit extra for this publication.
Read more
10 people found this helpful
Report abuse

MrGyges
5.0 out of 5 stars Mr Shakespeare telling us that knives alone won't rid us of tyrants
Reviewed in the United Kingdom on June 17, 2016
Verified Purchase
A tale of the disease of power, by a man who gives every character their own freely spoken voice.
Read more
One person found this helpful
Report abuse

essam
5.0 out of 5 stars Five Stars
Reviewed in the United Kingdom on July 24, 2017
Verified Purchase
It arrived in great condition, Thanks
Read more
One person found this helpful
Report abuse

P. smart
5.0 out of 5 stars Just great, no problems at all.
Reviewed in the United Kingdom on December 17, 2015
Verified Purchase
Just great, no problems at all.
Read more
Report abuse
See all reviews
Back to top
Get to Know Us
Make Money with Us
Amazon Payment Products
Let Us Help You
EnglishChoose a language for shopping. United StatesChoose a country/region for shopping.
© 1996-2021, Amazon.com, Inc. or its affiliates