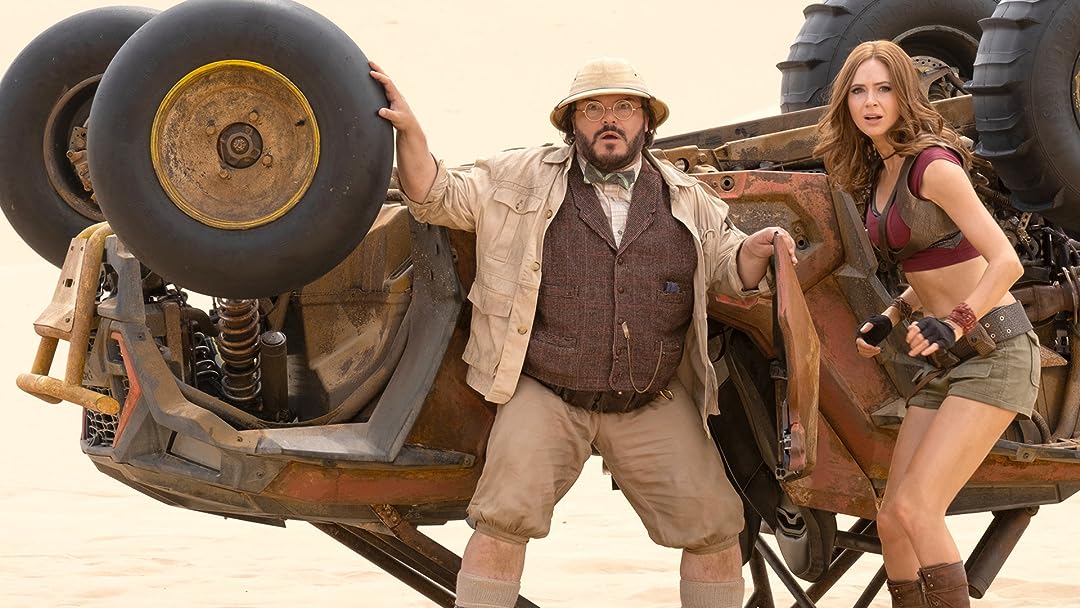 Jumanji: The Next Level (With Bonus Features)

Tina G.Reviewed in the United States on March 6, 2020
5.0 out of 5 stars
No buyer’s remorse on this sequel...4 ½ stars
Verified purchase
If you enjoyed the first one, you def need to watch this one. I was worried since it’s a sequel it wouldn’t hold up but it kept my interest from start to finish. No buyer’s remorse here.

The films starts a couple years into the future where the group (Spencer, Fridge, Bethany, and Martha) have been living their lives away from each other but plan a reunion for brunch over the holidays. Spencer who is struggling with his mental health ends up no showing, resulting in the group going to his house in search of him only to find Spencer’s grandfather Eddie (DeVito) and his former business partner Milo (Glover). The adventures begin when the group hears the game playing from the basement. Realizing Spencer is in the game, they agree they must help him, only things don’t go as planned as the game is partially broken resulting in different avatars and Eddie and Milo entering the game instead of Bethany. This also helps to set up the jokes and amusing dialogue throughout the movie. This time they must recover the jewel from Jurgen the Brutal and show it to the sun in order to win the game, all while teaching Eddie and Mile (now played by Hart and Johnson) the ins and outs of the game. Characters swap bodies during the game, new game items, new skills, new dangers in animals and human form, and yes some heartfelt moments or cheesiness (whatever you prefer to call it). Once the game begins, the action starts and is pretty much non-stop. I’ll leave it at this due to spoilers but will say in the credits, there’s potential for another movie (they better do it right if they are going there).

Regarding acting, Hart absolutely nailed the part. Don’t get me wrong, they all did great, but Hart shines (anyone who’s a Glover fan will know what I’m talking about).

Bonus features include: body swapping snapping into character, reuniting the cast, making of Jumanji: The Next Level, creating the scene ostrich chase, and creating the mandrill bridge scene. These were fun to see after the movie.

Parental guidance/trigger warnings: The characters are in a game fighting to stay alive (these are in game)- death, stealing, fighting, weapons, implied affair. Language used: Sx2, h*ll a couple times, g*ddamn x3, son of a b. I may or may not have missed a few things.

KaneReviewed in the United States on March 9, 2020
1.0 out of 5 stars
Lots of profanity
Verified purchase
Wish I would have known this before buying for my children. Spent $21 on something they cannot watch.
46 people found this helpful

M. OlesonReviewed in the United States on December 16, 2019
4.0 out of 5 stars
Very funny...and entertaining sequel.
Theater review. Possible spoilers. I remember seeing the 2017 reboot of “Jumanji.” It wasn’t my first choice but the film I wanted to see was full. I still questioned going as I remember the original 1995 version as being ‘meh.’ In any case I went and I loved it. The cast was great, especially Jack Black whose avatar character had been inhabited by a girl. In this direct sequel, the cast remains intact with some great additions in the form of Awkwafina, Danny DeVito and Danny Glover.

As the film opens in real life, Spencer (Alex Wolff) has been away at college and his relationship with girlfriend Martha (Morgan Turner) has grown cold. He’s not sure she is still interested and he’s not sure how to approach her. He’s come home where his mom (Marin Hinkle) is caring for her dad, Eddie (DeVito) who has broken his hip. Annoyed by his grandpa’s snoring, Spencer goes into the basement and finds the Jumanji machine that he and his friends smashed at the end of the first film. When Spencer ghosts his friends at dinner, they go back to his house to find him.

Meanwhile Eddie received a visit from Milo (Glover), his retired partner at the restaurant they started years ago. Eddie has never forgiven him for retiring, which put Eddie on the shelf as well. When Martha, Bethany (Madison Iseman) and Fridge (Ser’Darius Blain) go to see what happened to Spencer they assume the now working Jumanji gizmo has been activated and he’s been sucked into the game. They decide to take the plunge one more time to find their friend, risking getting caught in the game unable to return to the real world. One thing. They didn’t have time to pick their avatar…all to hilarious results in the other world.

To go further would perhaps be giving away too much, but let’s just say, new wrinkles develop on the other side. There you will find Karen Gillan returning as avatar Ruby Roundhouse, Dwayne Johnson as Dr. Smolder Bravestone, Keven Hart as Franklin “Mouse” Finbar and Jack Black as Prof. Shelley Oberon. Watch for Rory McCann, The Hound from “Game of Thrones” as Jurgen the Brutal. It’s all funny stuff and great entertainment. Recommended.
83 people found this helpful

Timothy CasstevensReviewed in the United States on March 7, 2020
1.0 out of 5 stars
Profanity Profanity
Verified purchase
Full of profanity. GD used several times. Not recommended for anyone.
39 people found this helpful

WayneB63Reviewed in the United States on March 7, 2020
1.0 out of 5 stars
Foul language
Verified purchase
It took away from what could have been a good movie, love the characters, each and every one of them, loved the story....the foul language means my grands wont be able to see it.

Whomever signed off on this being acceptable should really just find another line of work.
25 people found this helpful

W. SclampReviewed in the United States on April 7, 2020
1.0 out of 5 stars
USES G*DD**N REPETITIVELY
Verified purchase
If there was an award for most uses of G*DD**N in a “family” friendly movie, then Jumanji: The Next Level would win hands down. We enjoyed the original from 1995 and Jumanji: Welcome to the Jungle so much that I didn’t even think to check reviews or ratings before renting this. I was mortified in front of my two elementary aged children and their grandmother. I watched it myself and I think I counted at least 8 times. The excessive cussing didn’t add to the plot line at all and the repetitive use of such a highly offensive word was ridiculous. The final scene paved the way for another installment. I will NOT be supporting this movie franchise any further it the language continues. Even the most foul mouthed individuals don’t use that word so frequently in normal conversation. It made it difficult to enjoy the actual movie.

Side note, I thought the main characters did an excellent job of acting out the personas of each other when roles would switch. I was very impressed with that. You could easily tell who was taken over by who by their body language, mannerisms, facial expressions and accents. Only slightly less funny than Welcome to the Jungle.
16 people found this helpful

DeVoiDAnGeLReviewed in the United States on March 9, 2020
4.0 out of 5 stars
First half (1hour) is terrible with repetitive, better after that.
Verified purchase
Only giving it 4 stars and not way less because the Visual effects are great. But the first half of the movie is so bad that I nearly stopped watching.

Having around one hour of two characters not understand they are in a video game was GRINDING and repetitively ANNOYING.

I think even the director and writers knew that, and put those two off screen, and put us back on the same track as the first movie.

If you can stomach the first hour, know it gets a lot better. But it’s very hard to get through that first hour.

If this review was about the first hour i would have only given it 1 star. It’s that bad!
18 people found this helpful

K.Reviewed in the United States on March 11, 2020
3.0 out of 5 stars
Almost as stupid as it needs to be
Verified purchase
Barring a little too much focus on character development which gets in the way of action, this is reasonably close to what it needs to be: Stupid and fun. It could just stand to be a bit MORE stupid.

Next time out, keep the cast a little smaller, keep them where they end up, and build on current knowledge rather than introducing too much new stuff.

Writers: We're inundated with outstanding, genre-defining "stuck in another world" tales from anime, and we're spoiled for choice with drama and character development. Anything we want to watch, no matter how obscure, we can find with a quick search.

You can't beat that. You can't do ANYTHING we haven't seen. Make peace with that fact, and show us that same thing we can see in so many cartoons, but with absolutely no trappings of common sense or reality.

Listen to Dwayne. The dude's not a meathead. He's already in a franchise that's managed to pull it off for decades. Take some inspiration to ensure this one lasts, as well. It's already more fun than the original from the '90s (which had great acting, but pretty forgettable writing and an aesthetic that didn't age well), but it can be even better than that.

Here, we're shown that Jumanji can be anything, with some advanced technology on display. Great. Have some fun with that. It's a game, right? What if there were sequels taking place in different fantasy environments?

Push the stupid, not the sense. We'll have many more movies out of Jumanji that way.
13 people found this helpful
See all reviews
Back to top
Get to Know Us
Make Money with Us
Amazon Payment Products
Let Us Help You
EnglishChoose a language for shopping. United StatesChoose a country/region for shopping.
© 1996-2022, Amazon.com, Inc. or its affiliates