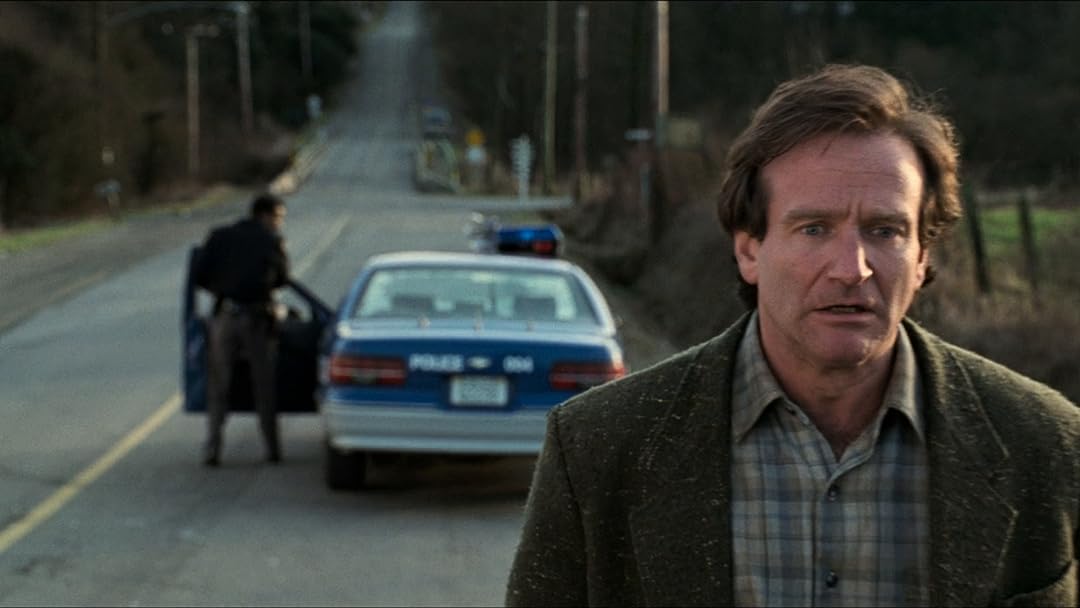 (23,005)
1 h 44 min1995X-RayHDRUHDPG
A mysterious game transports its players to the jungles of Jumanji! Thrilling effects!

Jack E. LevicReviewed in the United States on January 8, 2018
5.0 out of 5 stars
FUN AND ADVENTURE WITH ROBIN WILLIAMS AT HIS YOUTHFUL FINEST
Verified purchase
I just saw the 2017 Jumanji and thought it would be a good time to finally see the original. Somehow I had missed it through the years. Needless to say there is really not much of a comparison between the two movies other than the name and general story about a mysterious game called JUMANJI.
The 1995 JUMANJI is a bittersweet step back in time seeing a young, handsome and lively Robin Williams at his best. I was never a fan of slapstick, goofy Robin Williams but always appreciated his films that were series and had humor and that is what JUMANJI is. Alan Parrish (Robin Williams) disappeared from his home and has been trapped in the Jumanji game for decades until released by a couple of kids Judy and Peter Shepherd (Kirsten Dunst and Bradley Pierce). Alan is released along with an assortment of wild animals and a crazy safari hunter.

JUMANJI is pure fun and adventure as Parrish and the kids try to save their town from destruction and to end the game once and for all. No doubt the GC animals were outstanding by 1995 standards, though they look weak by the current visual effects. This is a fine cast that includes a young Kirsten Dunst, David Alan Grier and Bebe Nuewirth. It's a fun and enjoyable film and a chance to see the sadly missed Robin Williams at his finest.

Mark Ira KaufmanReviewed in the United States on February 12, 2018
5.0 out of 5 stars
Jumanji like it's never been seen outside a movie theater!
Verified purchase
It was always a fun movie. And the blu ray was very good. But when an older movie shot on actual film is remastered for UHD, the potential of seeing all that's in that film is enormous.

The detail and color range are spectacular. Does it look like a new or recent movie. Of course not. But it is as good a restoration of an old film as I've seen so far, with the exception of the UHD restoration of "The Bridge on the River Kwai"

If you like "Jumanji," and you have a 4K tv and a UHD player, you will LOVE this restoration.

ManiacalSparkReviewed in the United States on September 29, 2019
4.0 out of 5 stars
A Near Perfect Adventure
Verified purchase
EDIT: 4/28/2020

I apparently posted the review for Jumanji: Welcome To The Jungle here by mistake instead of a review of the original film. I've left my original review intact here, but I'm now going to fix it and give this product the correct review.

Jumanji is a classic film and one of Robin William's finer outings that did one of the better jobs and blending his comedic skills with his ability to be dramatic and serious. And Jumanji IS a dramatic film. It tells a story that embraces healing, self worth, acceptance of past mistakes and the desires to correct them, and the effects that negative emotions can have on your life.

I'm going into full movie summary here so for a TLDR: Jumanji is an excellent movie that focuses on how running from your problems will just lead to negative consequences down the road. IT stares a fantastic cast with great and memorable characters and some great action sequences. Jumanji is a fully realized film that had a lasting impact on Hollywood, and fiction in general from many filmmakers and writers copying it and it's concepts and was later revisited in the spiritual sequel "Zathura" and then twice more with two sequels "Jumanji Welcome to the Jungle and "Jumanji: The Next Level"

Really the only thing bad about this film is that it drags a little near the end, when the novelty of the film's creatures and rampages starts to wear thin, and the CGI having aged, though watching this in 2020 some of the CGI still holds up remarkably well. Peter and Judy are somewhat annoying characters, though Kirsten Dunst does a fantastic job, just showing how great of an actress she is, even at such a young age. The story does have some level of awkwardness to it at some points, and watching it now there's just a level of cringe at how primitive stuff looks, but I suppose that's inherent with a film set in the late 90s.

I cannot recommend this film enough. While it has aged and Robin Williams is sadly no longer among us, it is a true modern classic that gives us a thrilling adventure while having a much deeper meaning behind it's madness.

Jumanji: Welcome To the Jungle is almost a perfect sequel. It modernizes the premise, being completely faithful to the original film while introducing brand new elements to the lore and universe. I absolutely loved how they weaved actual video game mechanics into the story, not just for generic action sequences but as actual story points, and I loved how the world FELT like a video game, with non-player characters acting out their roles like they would.

I just really loved how the movie expanded upon the old and evolved with the new. I had been expecting just a cash grab and I was so pleasantly surprised that it wasn't thanks to tight writing and a cast of incredibly charismatic actors that really fit the roles they are given. The only real flaw in this film would have to be the final act, which felt a bit rushed.
10 people found this helpful

Scotspiration™Reviewed in the United States on October 12, 2019
5.0 out of 5 stars
One of Robin Williams' finest.
Verified purchase
Superbly directed. One of Robin Williams' finest. Filmed in South Berwick, ME, one of the many coastal communities founded by my ancestors. Reminds Americans of the beginning and end of the tremendous shoe shop industry in New England. The shoe shop depicted in film wasn't unlike reality during the late 1970's - which wrought the finality of the shoe manufacturing age. Lovely little community, South Berwick borders Rochester, NH, whose manufacturing firms included four-story Hubbard Shoe that the shoe shop in Jumanji was loosely based upon. South Berwick's Prime Tanning is deleted out of the first Jumanji movie, but Prime Tanning provided much needed income for many families in the local area. If you visit the local post office in South Berwick to buy a book of stamps today, you might still see a remnant of that Jumanji jungle stampede situated on a small shelf to your right. And, when you see it, remember the drums, and most importantly - remember Robin Williams, the talented artist, the actor, the American.
9 people found this helpful

AJReviewed in the United States on December 4, 2017
5.0 out of 5 stars
Worth watching again for all you 90's old-timers!
Verified purchase
Classic. Last time I watched this movie I had to be around 5. I was worried that it would have aged badly (as did my other childhood memories like N64 Harvest Moon & so forth). While the special effects had obviously aged, it was still a great watch! I was impressed by how well some of the graphics actually were for the time. Captivating plot with layering storylines that I sadly hadn't caught a lot of as a child. The original Jumanji will always be one of my favorites. If none of that interests you to watch, remember it's Robin Williams, the one and only; he had such an impact on my childhood & I can still see why! (Can't wait to see how the remake compares!!)
19 people found this helpful

joel wingReviewed in the United States on February 7, 2021
4.0 out of 5 stars
An adventure of the worst kind as board game comes to life
Verified purchase
Jumanji was based upon a children’s book. It’s a fantasy where a board game comes alive. It started with Robin Williams and Bonnie Hunt playing when they were kids and Williams got sucked into the game. Over 20 years later Kirsten Dunst and Bradley Pierce start playing the game and bring Williams back. They face monkeys, a giant living plant, a herd of African animals, a lion and more. Not only that but the animals set upon the town they live in and wreck everything. The effects are a bit dated and sometimes don’t look the greatest but that’s overlooked by the pure fun of the story. It’s a real adventure of the worst kind.
3 people found this helpful

ChrisReviewed in the United States on June 7, 2018
5.0 out of 5 stars
Remember to finish your games if you start them
Verified purchase
I saw this originally on VHS, since then a few times on TV and now blue ray, every time it has been great and I always end up watching it to the end (ya know, have to finish the game!)
The characters are funny and you feel a bit for them and all the craziness that is going on. The play on father figures is good and something I didn't catch when I was younger (honestly needed someone to point it out to me) but very clever. The CGI doesn't hold up vs the stuff of today and the animatronics isn't as good as the newer stuff at Disney or Universal but that really doesn't take anything from the story.
If you haven't seen this, do, it is two hours (or so) well spent. Kid friendly even that is if they are not afraid of psycho monkeys.
8 people found this helpful

Blake XReviewed in the United States on June 18, 2018
5.0 out of 5 stars
The best Jumanji has ever looked
Verified purchase
Huge improvement from the previous Jumanji releases. I watched it on Netflix a few years ago and thought it looked really outdated and low quality. This newest blu-ray release finally does it justice and it has never looked better. This is the definitive version to own on blu-ray.
15 people found this helpful
See all reviews
Back to top
Get to Know Us
Make Money with Us
Amazon Payment Products
Let Us Help You
EnglishChoose a language for shopping. United StatesChoose a country/region for shopping.
© 1996-2022, Amazon.com, Inc. or its affiliates