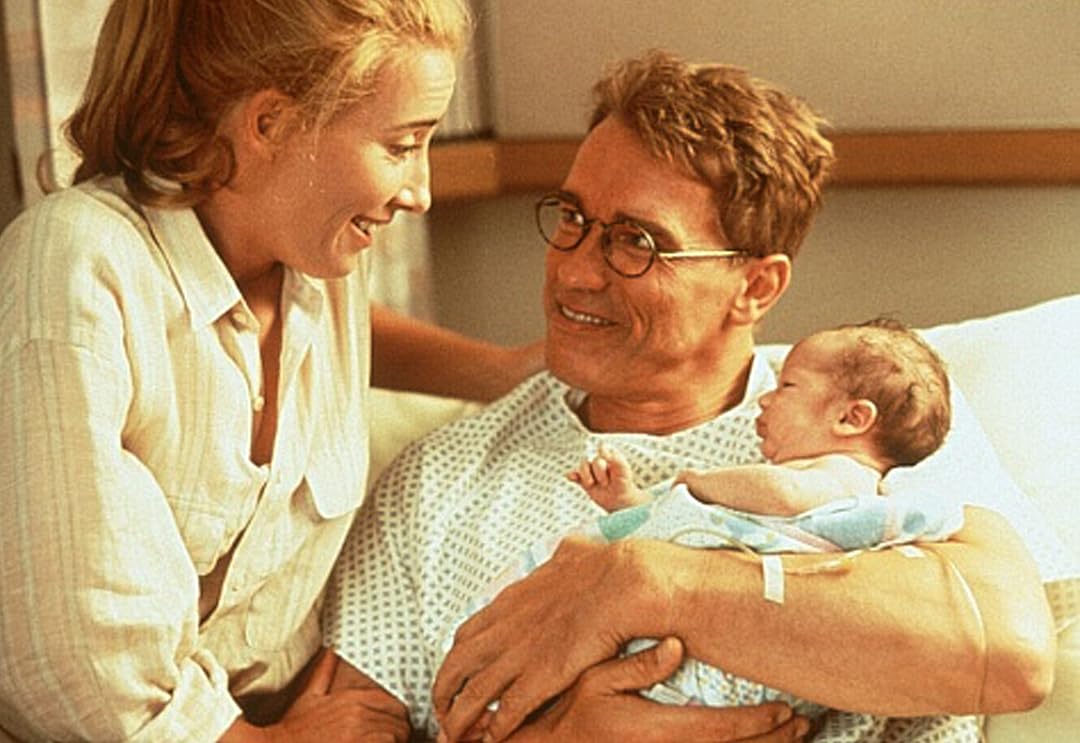 (1,321)
4.71 h 50 min1994PG-13
The laughs don't stop when a male doctor (Arnold Schwarzenegger) becomes pregnant after his associate (Danny DeVito) talks him into taking an experimental drug as part of a research project.

BusyBookMommaReviewed in the United States on November 6, 2019
4.0 out of 5 stars
Amazingly funny movie that every man and woman should watch.
Verified purchase
I LOVE, LOVE, Love this one. What women wouldn't love to see a man go through pregnancy and child birth. I don't know a single one who wouldn't pay for that luxury.

Dr. Alex Hesse (Arnold Schwarzenegger) and Dr. Larry Arbogast (Danny DeVito) are trying to create a drug that will help women who have a history of miscarriage safely carry a baby to term. When their funding is cut, Dr. Diana Reddin (Emma Thompson), who is working on a project that involves freezing eggs, is given their lab and funding. She graciously offers to share the lab and cost of supplies with them, so they don't have to quit working. When things go south, they come up with the brilliant idea to impregnate Alex with a baby. Unbeknownst to Alex and Diana, the baby that Alex carries is his and Diana's biological child. Larry stole a tube of eggs from Diana's lab, not realizing until later that they were actually hers. What takes place after is a roller coaster ride of laughs. This one is a movie that will never get old no matter how many times I watch it.

M. HughesReviewed in the United States on September 10, 2014
5.0 out of 5 stars
Getting in touch with your feminine side...in a weird way
Verified purchase
Okay, Junior has an absolutely unbelievable premise. Get over it. Most movies require a certain "willing suspension of disbelief." Possibly this one requires more than others, but if you can make the leap, it's well worth your time. Arnold Schwarzenegger, nobody's idea of a guy with a feminine side, agrees to use his own body for a human trial of a fertility medicine. When the trial is over, the medicine is proven worthy, but Arnie finds himself unwilling to end the pregnancy. The exact reason is never quite given, but since pregnancy makes him a considerably more likable fellow, than the cold, aloof man he was before, I can deal with that.

The shoe in the machine is Emma Thompson, another scientific researcher who is such a klutz it's amazing she's allowed anywhere near expensive scientific equipment. It seems the egg taken for the fertility experiment belonged to her and was taken without her consent, so Arnie is carrying Emma's baby. Complicating everyone's life further is that Danny DeVito (Schwarzenegger's research partner) learns his ex-wife is pregnant after a one-night stand with one of the staff members of the Aerosmith band, and she wants her ex to deliver the baby. Schwarzenegger and the ex get cozy as "girlfriends"--binge eating, comparing belly sizes--while Arnie starts falling for the likable, if dangerous, Thompson.

And Frank Langella, who seems to have found is true calling in life as a villain, makes a great one in this as he decides to get rich and famous by taking over the research project AND Arnie. (Spoiler alert--it ain't gonna happen, Frankie.)

This is a warm, somewhat corny but very fun movie about role reversal and its effect on two men, two women, and two babies. I've watched it probably a dozen times over the last 20 years, and it's still fun. It's also a testament to Danny DeVito's acting ability. Rather like Christopher Reeve's "you'll believe a man can fly," DeVito and Schwarzenegger will make you believe a man can have a baby.

PadmapadaReviewed in the United States on July 27, 2018
4.0 out of 5 stars
Fun with Arnold and Danny and Emma. Really.
Verified purchase
What can I say? I love this old movie, and this last time wanted a friend to see how much fun it is, so I saw it again. Danny DeVito and Arnold Schwarzenegger are great in 'Twins', and here they are in the medical world together, working on a secret plan to enable men to become pregnant. Arnold becomes the test case, and he is lovely when his hormones make him all weepy and sentimental. Emma Thompson, a British actress and screenwriter who won an Academy Award for her performance in Howards End, plays his romantic interest, a ditzy but brilliant fellow scientist. The film has a happy ending, and we can use a little of that about now.

ShawnaReviewed in the United States on July 15, 2021
4.0 out of 5 stars
Good movie
Verified purchase
I bought it on a whim one day cause I was thinking about it and how I used to own in on VHS. The price was very reasonable and worked great. It wasn't quite as hilarious as I remember it being from when I was young but I still enjoyed it.

chelsqeaReviewed in the United States on May 23, 2021
5.0 out of 5 stars
Too ridiculous to not love
Verified purchase
Great B movie. The whole thing is shenanigans and it was a lot of fun to turn our brains off have a few drinks and laugh at the sheer nonsense that is this movie. If you are a snob you will hate this. 10/10 for a bad film, loved it.

Julie B.Reviewed in the United States on April 25, 2020
5.0 out of 5 stars
Thoroughly Enjoyable
Verified purchase
A fun premise! Great to see Arnold Schwarzenegger in a non-violent role. Danny DeVito is warm and funny. Emma Thompson is perfect.
One person found this helpful

Flash GReviewed in the United States on July 2, 2020
4.0 out of 5 stars
Transfer looks great, had good Laughs!!
Verified purchase
Product arrived on time,good condition,nicely wrapped. Thank You Seller!! Would buy from seller in the future!! Hopefully, Movie studio would offer the Movie "Twins" in Blu Ray as well. I read that a sequel to it with Eddie Murphy is in the works!! (Triplets or something in that order).

Movie MatrixReviewed in the United States on January 14, 2019
5.0 out of 5 stars
Hilarious!
Verified purchase
Another ridiculous premise, but Devito and Schwarzenegger are a Dynamite Duo! and Emma Thompson's physical comedy is on the level of Jim Carey in this film, it's fabulous!
See all reviews
Back to top
Get to Know Us
Make Money with Us
Amazon Payment Products
Let Us Help You
EnglishChoose a language for shopping. United StatesChoose a country/region for shopping.
© 1996-2021, Amazon.com, Inc. or its affiliates