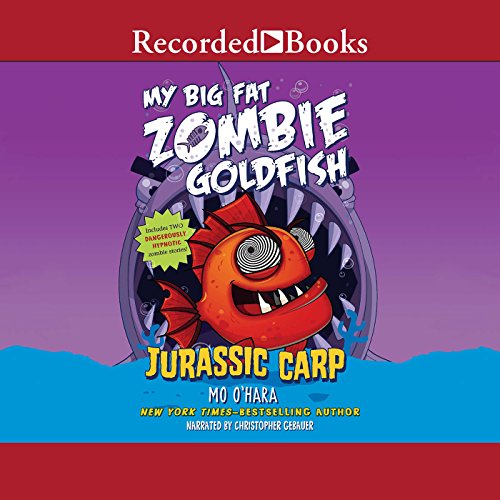 When Tom and his best friend rescued Frankie the goldfish from his evil-scientist big brother's toxic gunge, their new pet came back as a Big Fat Zombie Goldfish. Frankie is good at saving the day, but can he become a real knight in shining armor during the medieval day reenactment joust? Then, can the school survive two Big Fat Zombie Goldfish? Find out when Tom's evil big brother manages to clone a Jurassic carp!

Special invitation from Audible!
Learn more about Membership
List Price: $13.99
You Save: $2.00 (14%)
By completing your purchase, you agree to Audible’s Conditions Of Use
Sold and delivered by Audible, an Amazon company
Share

4.9 out of 5 stars
4.9 out of 5
601 global ratings
How are ratings calculated?
To calculate the overall star rating and percentage breakdown by star, we don’t use a simple average. Instead, our system considers things like how recent a review is and if the reviewer bought the item on Amazon. It also analyzes reviews to verify trustworthiness.

Katie
5.0 out of 5 stars My 8 year old nephew LOVES the series!
Reviewed in the United States on July 19, 2019
Verified Purchase
I purchased the first three of the series for my nephew for Christmas. His birthday was in May so I wanted to get him the other three books. I honestly have never seen him so excited over a gift I've given him. He's 8 years old and said "I love those books!" I'm super excited that I found something he really likes I'm going to get more from this author
Read more
Helpful
Report abuse

Srula Duchman
5.0 out of 5 stars This Series is Great
Reviewed in the United States on May 24, 2021
Verified Purchase
If you like Dav Pilkey and the books he has written,
Buy these for his fans and your kids will be smitten,
They are fun to read and have some brilliant use of pun,
My son re-read this book a few times when he was done,
A soft cover book so treat it with care,
These are priced extremely fair.
Read more
Helpful
Report abuse

Joy Gilkeson
5.0 out of 5 stars Great series, disappointed there are no more.
Reviewed in the United States on May 25, 2020
Verified Purchase
I am writing this review for my son. He loves this series. He has read each book a few times. He gave this particular book 4.5 stars. He said it was funny, suspenseful and silly. He loves the character Pradeep because he is nerdy and smart. He is disappointed that there are no more in the series.
Read more
Helpful
Report abuse

Kindle Customer
5.0 out of 5 stars Great, hilarious
Reviewed in the United States on August 1, 2017
Verified Purchase
My son loves these books. They were his first real intro into chapter books. I think it's goofy, silly and just perfect for a 6 year old boy!
Read more
2 people found this helpful
Helpful
Report abuse

Meaghan Piretti
2.0 out of 5 stars Not as good as the others!
Reviewed in the United States on August 7, 2020
Verified Purchase
Disappointed in this book. My 6 year old loved the other books. The dialogue in this one is strange and words are difficult.
Read more
Helpful
Report abuse

bboppblue
1.0 out of 5 stars Blank pages
Reviewed in the United States on April 2, 2018
Verified Purchase
My copy had SEVERAL blank pages but sadly it was too late to do a return/exchange for. It's very disappointing since my daughter reread this book like very other week and I have to hear her scream "BLANK PAGE!"
Read more

1.0 out of 5 stars Blank pages
By bboppblue on April 2, 2018
My copy had SEVERAL blank pages but sadly it was too late to do a return/exchange for. It's very disappointing since my daughter reread this book like very other week and I have to hear her scream "BLANK PAGE!"
Images in this review

Amazon Customer
5.0 out of 5 stars Great kid books!
Reviewed in the United States on February 18, 2019
Verified Purchase
One of the continuing books from the first box set we ordered. Great comedy books for my stubborn, hard to get to read son. These books at least he enjoys when he has to read. AR levels 3.5 thru 4.5 each one is different
Read more
Helpful
Report abuse
See all reviews
Back to top
Get to Know Us
Make Money with Us
Amazon Payment Products
Let Us Help You
EnglishChoose a language for shopping. United StatesChoose a country/region for shopping.
© 1996-2022, Amazon.com, Inc. or its affiliates