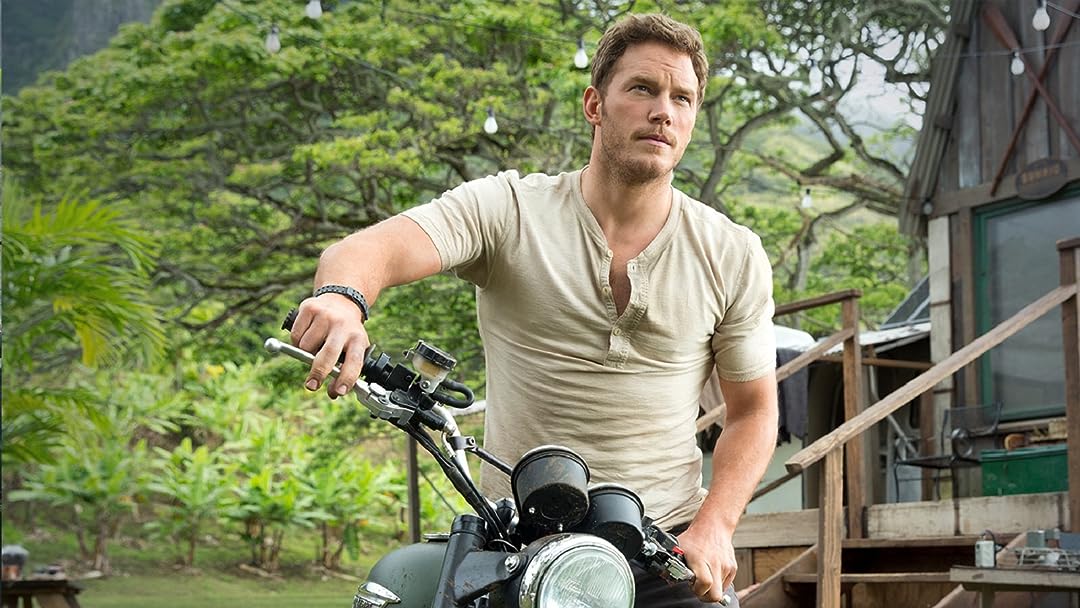 Save with with the Jurassic movie collection on Prime Video shop now.

Joel DaltonReviewed in the United States on July 13, 2018
5.0 out of 5 stars
Great movie with lots of homages to the original.
Verified purchase
I really liked this movie. None of them will ever be as good as the first one, though. Still, this was a solid movie that pays a lot of homage to the original. There are lots of easter eggs for fans of the original movie. There is plenty of action and it does a good job of entertaining old fans and bringing new fans up to speed on the dangers of creating a dinosaur theme park.

I really didn't know how I felt about the new direction of the plot at first, but I'm made my peace with it. Basically, it centers around the old idea that humans will exploit something that should be wondrous and special for personal and financial gain. Also, the old adage about when anything new is created the first thing some people ask is how can it be used for war.

After watching the second movie in the new arc, I've come to like it a little better. Also, since I heard what they're planning for the series. They're opening the world and trying to get away from just retelling the same story with new characters. While I loved the original and want to see more of it, and I'm sure many of you do too, I also understand that we'd eventually get tired of it and we'd be comparing it to the originals and they wouldn't hold up.

What I am really worried about is them leaving the island. My least favorite part of the entire franchise is in the second movie where they take a few dinos to LA. I loved the first part on the island where they're in the wild, but not when they're in the city. It just turned into godzilla at that point. So I hope they handle that aspect better, going forward. I see a few possibilities that i'd love to see explored.

This is a good movie, though, that I think new and old fans alike can enjoy.

JJCEOReviewed in the United States on August 7, 2018
4.0 out of 5 stars
A good film with very good special effects!
Verified purchase
We watch films for entertainment and I found this movie to be entertaining and fun. The dinosaur special effects were simply amazing. I liked the storyline and despite some of the silliness in the film I enjoyed watching it.

I liked the fact that the movie came with a BluRay disc, a DVD disc and a digital copy. I love to use the digital copy and I stream it to a high resolution digital projector into a 12 foot diagonal picture. Backed up with a 7 channel stereo system the movie seems like you are watching it at the theatre.

The BluRay picture and the audio track were just excellent. I liked that the film was constant action and people were fighting to survive. Like most movie series you don’t get the wow factor like you did in the first film. This is still a very good film and I rated it at 4 stars. Had it been the first film, with the expected first impression wow factor, it would probably have been a 5 star rating.

It is a good film and worth owning to have in your video library.
11 people found this helpful

Karen J. Reviewed in the United States on February 2, 2021
3.0 out of 5 stars
Great movie except for the "star".
Verified purchase
This movie would have received a five-star review from me had it not been for whoever made the horrible decision to put Bryce Howard into it. She is ridiculous because she cannot act to save her life! She should have been the first to go, given the greed-driven mentality and cold personality towards her family.To work in a DINOSAUR park and to be constantly on the move, whether it be in a helicopter or what, it is "jumping the shark" to think that I viewers are supposed to believe that this woman wears a dress and HEELS all day. Let's not forget that she outran a T-Rex in heels! Completely laughable. And throughout the entire day and night of running through rough ground, her heels never gave out. It takes away form the movie so much. Would have been a better movie without her. Her hair and makeup are always perfect and she is as white as a ghost. It's as if she belongs in a completely different genre of movie, like an office setting in a metropolitan area, not a jungle island! Unfortunately, the insanity of this decision overshadowed most of the other characters for me, such as Owen Grady. No man who's personality is such, would EVER be attracted to an idiot like Claire.Another "jumping the shark". scenario. No sequel could ever be as good as the original, ALTHOUGH, the same type of mistake was made in the first movie by putting Laura Dern in it, another "actress" who made it because of her father. When she said "Run!" to Sam Neill, I literally cringed. Sometimes miscasting ruins a movie for me. I appreciate the CGI and the stories so I still enjoy the movies but the women in them are just awful. why does every director feel compelled to insert a woman into every story? One of my favorite movies was "Top Gun", yet I thought that the woman added nothing to it. To me, the movie was about "brotherhood" and male camaraderie. Adding a "love interest" did nothing for it, in my opinion. Think about it for a moment. Remove Kelly McGillis and the movie is just as good. I thought she actually "lessened" the impact of the camaraderie theme.
3 people found this helpful

Benjamin M. WeilertReviewed in the United States on May 11, 2019
4.0 out of 5 stars
A reboot sequel that is nothing if entertaining.
Verified purchase
What happens when you genetically splice together a reboot and a sequel? This film. It’s interesting to find a franchise that’s willing to recognize the past material and build upon it, while also adding slightly new elements to it. The idea of training dinosaurs just like pets was undoubtedly the strongest element of this movie, even if the result was the same as it’s ever been. Part of the problem with this reboot, however, is that the characters don’t seem to click, even to the point of the relationships feeling forced.

While there were plentiful nods to the first film that started off the franchise, the plot seemed almost identical to the 1993 classic, but with plenty of cliches and hokey lines to go around. I think sequels like this recognize the elements that made the original great, but almost spend too much time overanalyzing to try and recreate the magic. These films ultimately fall short, mostly due to the synergy and sheer luck that made all the elements of the first movie work in the first place.

All that being said, it was an exciting thrill ride with a bunch of ridiculous dinosaur battles: essentially what you paid for anyway. I mean, the first film in this franchise worked because of the terror that goes with being trapped on an island full of dangerous dinosaurs. This film dispenses these scary moments, but in a way that just seems like a Hollywood action blockbuster (which if we’re honest, it is). It was nice to see the franchise try to return to its roots, but I also think we should have let this franchise go extinct with only the original as its hallmark achievement.

A reboot sequel that is nothing if entertaining, I give Jurassic World 3.5 stars out of 5.
4 people found this helpful

Debra H.Reviewed in the United States on October 17, 2018
4.0 out of 5 stars
Shopping with amazon is a dream come true BUT
Verified purchase
I’m giving this a 4 because it such a wonderful movie I’ve watched it a couple times. And it is good to be able to shop from home and have the product delivered to the door. But. I Purchased this DVD just a little over one month ago. The DVD Jurassic World. I am just now having the time to open it up and when I started opening it the DVD was sliding around within the case! We all know that’s the way our DVDs get scratched up. So I was disappointed. It’s not cheep, therefore I don’t think I am wrong expecting it to be taken care of until it reaches this home. I’m just saying please be more careful with other people’s property. Shopping with Amazon is a dream come true, so... those of you who working with Amazon please be worthy. Hopefully this DVD isn’t damaged. I will follow up if it is.
6 people found this helpful

ForeverYOUNGReviewed in the United States on May 22, 2016
5.0 out of 5 stars
Jurassic World
Verified purchase
Bought to go with my Jurassic Park Ultimate Trilogy... No doubt next year that will come out with a 4 pack! In any case, I know that "world" got panned in reviews, but I really liked it. The some of the special effects were awesome - my fav the clear balls you ride around in, in the park. Wished I were in it. Until the bad dinosaur got loose of course... It's worth owning if you own the others.. I happen to be a brice howard fan and she was very funny in this movie. Just my humble opinion... but then I am not a movie reviewer, just a movie watcher. I would say that these movies are good for 8-10 years old and older... there is quite a lot of scary violence... a few words...but no sex or nudity. Too busy trying to survive the escaped dinosaurs to think about a roll in the hay. :)
40 people found this helpful

amtbgReviewed in the United States on June 9, 2017
5.0 out of 5 stars
Yay to more dinosaurs!
Verified purchase
We simply adore Jurassic Park and dinosaurs as a whole. Needless to say, when Jurassic World came out, I was ecstatic. I remember leaving the movie theater with an enormous smile on my face, feeling giddy like I did when Jurassic Park 3 came to theaters. I purchased the 3d DVD for my Visio 3d TV and DVD player. It worked just fine without any glitches. The 3d elements on this movie are OK. I have seen more engaging 3d composition but this has definitely become a staple in our 3d collection. As far as the movie goes, I loved Jurassic World, the dinosaurs, and the characters.
18 people found this helpful
See all reviews
Back to top
Get to Know Us
Make Money with Us
Amazon Payment Products
Let Us Help You
EnglishChoose a language for shopping. United StatesChoose a country/region for shopping.
© 1996-2022, Amazon.com, Inc. or its affiliates