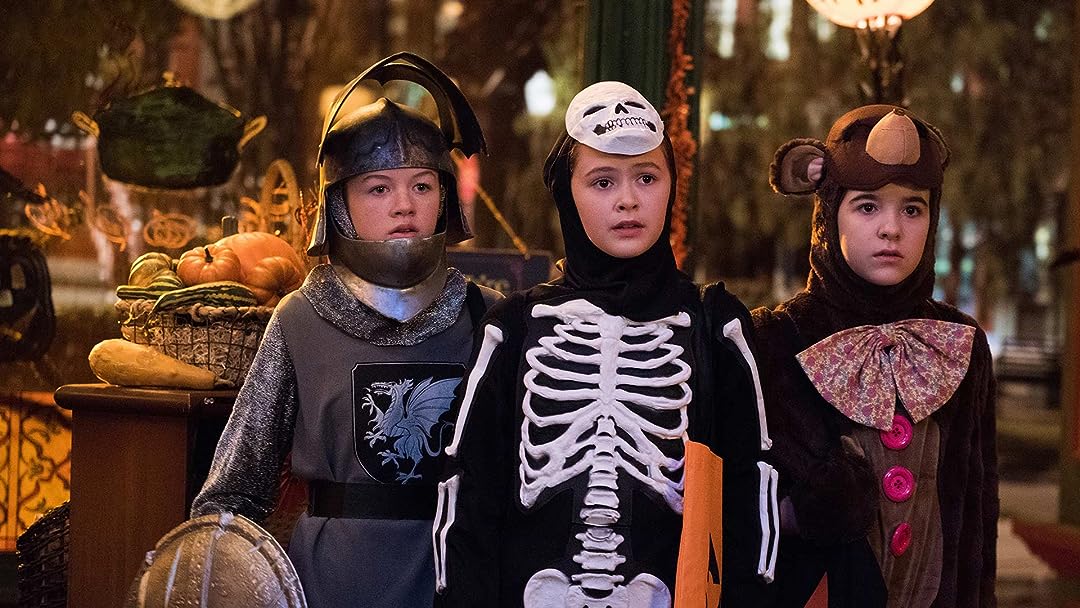 (4,305)
8.42017X-RayUHDALL
Kelly, Hannah and Darbie’s Last-Ditch Layer Cake broke every spell in town which brought Grandma Quinn back to her normal self, however it also brought back an old enemy... Chuck Hankins, a teenage boy who has been missing for 50 years. As the girls begin to invesigate Chuck they learn that he isn’t just an ordinary troublemaker, in fact, he's capable of much more than they could ever imagine..

GF FitGirlReviewed in the United States on January 22, 2017
5.0 out of 5 stars
Another Amazing Season of Magic!
Verified purchase
We just finished the long awaited season 2 of Just Add Magic and it was FANTASTIC! If you think this series is just for tween girls, you are sorely mistaken! My 12 year old boys, myself and my husband all absolutely LOVE this show! It has every element you would want in a show -great acting, an amazing plot that keeps you guessing at each turn,wonderfully reinforced wholesome values and Magic of course! Now that we finished episode 13, we just do not know how we are going to wait a whole year until season 3! I think a second round of season 1 is in order to tide us over and some pondering over who that guy is peeking int the window as the last episode fades out! Thank you Amazon, for such a wonderful family series!
22 people found this helpful

VerdellReviewed in the United States on January 30, 2017
5.0 out of 5 stars
Watch as a family
Verified purchase
This movie is intended for preteen girls but it has brought mother and daughter together. My 7 year old and I stumbled across the show by accident and we binges watched one Saturday. We ate pizza, had popcorn and sat in the couch and enjoyed.

Sure, the characters can be annoying sometimes but I'm a mom and they are preteen girls. If you are to ask my daughter, there's nothing wrong with the 3 friends.

When we finally finished season 1 we couldn't wait for season 2. But when it finally arrived, we started binge watching yet again but stopped and spread it out to have quality time.

Again, this isn't a movie you watch with your adult friends, but I love cuddling with my daughter and watching.

Robert A. CastilloReviewed in the United States on January 27, 2017
4.0 out of 5 stars
MAGIC IS KING
Verified purchase
Magic is part of human nature in every culture, whether we realize it or not, . From the ancient Thousand and One Nights to Harry Potter, good magic is always going to go well with humans. I guess this phenomenon derives from the Bible, the most magical book ever; I like to delve into black magic because some of my research requires it, I don't practice it. The Templar were worshipers of the black forces and that gave them esoteric knowledge-believe it. If you sell your soul to Satan, you'll be well informed and will be more informed than the rest, about every thing. Take the Navigators: Columbus, Magellan, Cabeza de Vaca, Balboa and others, were members of cabals, they all had the Templar Cross imprinted on their sails, they knew before hand of the existence of a continent:; Vasco Nunez de Balboa, credited with discovering the Pacific Ocean crossed America at the narrowest point: Panama, who told him, why he did not cross from New York to Washington State, or from northern Brazil to Ecuador, because he would've never completed them in his life time. Secret Societies began with the fratricide of Cain, Abel is cursed by the Lord with the inability of growing herds or crops; so what is he going to live from: extortion and crime. Since then we had to watch out for personas-non-grata.
Both seasons are interesting well written and well choreographed, a few cinematic mistakes, nothing major. Olivia Sanabia, who plays Kelly, reminds me of Gabrielle Anwar, the dancing Tango dancer in Scent of a Woman, specially in Season 1, l wonder if they are mother and daughter, any way. The series deserve to be watched because give plenty of enjoyment.
4 people found this helpful

AnnaReviewed in the United States on January 31, 2017
5.0 out of 5 stars
I'll either be back in an hour...or a year. + LOVE IT!!! +
Verified purchase
Family absolutely loves Just Add Magic! We continued our Prime Membership because we LOVE this show! Season 2 is just as good as season1, and cannot say enough about our beloved show! Cannot wait for Season 3, 4, 5, 6, 7, 8, and so forth! We have had Just Add Magic Marathons in our home, over and over and over again! Best loved by my 7 yr old daughter, but the boys love it too. A friendly and better version of another loved show that included 3 female magical sisters and a male friend. But this show has better values and Season 2 did not disappoint! Love seeing these actresses! Some of you will remember Amy Hill and Dee Wallace. I loved them separately, but they do so well together here, along with Ellen Karsten! The show is loving and mysterious. Keeps you on the edge of your seat, leaves you in anticipation for the next episode, and comes together oh so well! For this Season 2, the new catch phrase around our house is "I'll either be back in an hour, or a year"! We love it! Gotta recommend it! And want more more more! Good for all ages.
5 people found this helpful

Richard DanaReviewed in the United States on January 21, 2017
5.0 out of 5 stars
Just a fine show- again.
Verified purchase
I enjoy a children's show that is written for adults as well as teens. This show has about the finest collection of stories, actresses/ actors, and direction of any similar show I have ever seen. Each of the kids acting are performing its admirable skill, and are believable. The "magic" storyline is fun, and does not seem to take itself too seriously. I know it may seem a stretch, but I think this may be the best show on Amazon.
I work in a fairly intense job setting, and it can be exhausting. It may sound silly, but a kids show is just what I need to unwind after a rough day. Exciting, fun, and thoughtful. No bad language, families that care about each other and low level mysteries. Fun.
Amazon- please keep this show/ series for another season, at least!
Addendum: I wanted to add a simple addition to my previous review. The second season was as much fun as the first. Again, feels odd to be an adult watching a kids show, but it is simple, well written and fun. I enjoy the " magic" aspect of the show, but, frankly the writing and acting is amazing, considering it is a non major network production. What I said above still goes. Television shows be much more like this, and kids shows like this are just plain rare. Amazon, I hope you are listening.
19 people found this helpful

Lisa @ Binging BibliophileReviewed in the United States on January 20, 2017
5.0 out of 5 stars
Fun series...
Verified purchase
My 6 yo daughter decided she wanted to watch the first episode to see what the show was about. She keeps telling me, "Mom I think I should watch the next one, it's a 'to be continued' ". An explanation of cliffhangers followed. :) I started watching part way through the first episode. At first I was distracted because some of the acting (from the younger cast members) was not A+, but the story line soon sucked me in. The acting improved as the season went along, or maybe I stopped noticing. As one other reviewer stated, it is kind of a "Charmed", just for a much younger audience. That being said, I am 44, and though this is clearly a series geared towards kids and tweens I found myself binge watching it after my daughter went to bed..."Just one more episode..." There were some parts that were a little scary for her, so we just forwarded through. She is definitely younger than the target audience, but loves it any way. She has finished season 1, while I have just finished season 2 and I am slightly embarrassed to admit that I am looking forward to season 3. There is a season 3 coming, right? :)
68 people found this helpful

Sara SantosReviewed in the United States on January 16, 2017
5.0 out of 5 stars
WE CAN'T WAIT FOR SEASON 3!!
Verified purchase
Just Amazing! It's innocent, it's mostly about relationships (friends, family, how to treat others), and can pretty much catch your attention from the beginning to the end. I'm 34 years old and I just love Just Add Magic, we were needing something a show like that one, nowadays the movies, series and the TV is only about violence, sex and how to be really bad to others. My daughter is five and she loves. We spend a lot of time together watching Just Add Magic. Please bring season 3!!
12 people found this helpful

OlyaReviewed in the United States on January 25, 2017
5.0 out of 5 stars
A Magical Gem for All Ages - Wonderful!
Verified purchase
This is really one of the best series shows which I have ever watched! The stories, the concept of magic, content, acting, costumes, set, and just the script, and feel of this show is just 110% awesome! This is so entertaining and NOT "dumbed down" or stupid in any way, that it is completely entertaining to watch at any age as long you are not a grinch.
This series so much reminds me of my childhood with my little girl friends and how we all went through a phase of being inseparable best friends and finding mystery and magic in just about everything around us - we looked for it! I really am so surprised that someone was brilliant and insightful enough to create this wonderful, happy, positive, magical, and innocent show which captivates and entertains.

Thank you to the creators, the director, and Amazon for caring about the quality of the content and making such a wonderful series that doesn't cut corners or fade into crap...thank you! :)
One person found this helpful
See all reviews
Back to top
Get to Know Us
Make Money with Us
Amazon Payment Products
Let Us Help You
EnglishChoose a language for shopping. United StatesChoose a country/region for shopping.
© 1996-2022, Amazon.com, Inc. or its affiliates