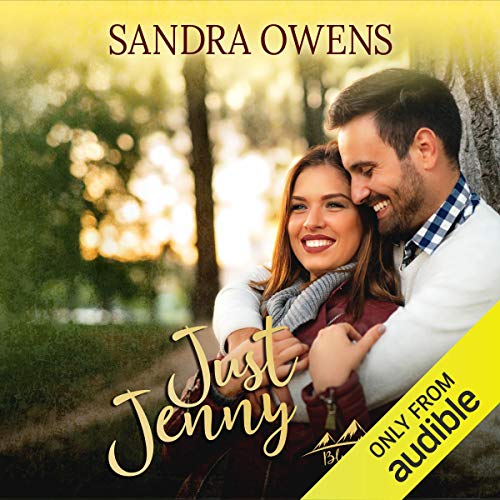 4.7 out of 5 stars
4.7 out of 5
115 global ratings
How are ratings calculated?
To calculate the overall star rating and percentage breakdown by star, we don’t use a simple average. Instead, our system considers things like how recent a review is and if the reviewer bought the item on Amazon. It also analyzes reviews to verify trustworthiness.
Top reviews

Heather
5.0 out of 5 stars Ms. Owens can flat out write a love story. I highly recommend this book!
Reviewed in the United States on June 26, 2018
Verified Purchase
Just Jenny has both cussing (including f-bombs) and on-page sex. If those things will cause you to leave a bad review, this might not be the book for you. This is book one of the Blue Ridge Valley series but it completely stands alone.

This book is one of my favorite Sandra Owens books ever, and that is saying something because I have enjoyed all of her books. Ms. Owens just has a way of making me believe in happily ever after. This book deals with some really serious and heartbreaking topics, but it has a ton of humor, laced through it that, coupled with the heat and fantastic story make the serious things not feel so heavy. Ms. Owens has a killer sense of humor that she displays throughout all of her books, and this one is no exception. I found myself highlighting a bunch of moments – both subtle and blatant - that made me laugh enough that I wanted to be able to go back and re-read them later. I love it when that happens.

Another thing Ms. Owens does so well is to shape characters that are relatable and so incredibly likable. Dylan's backstory was so heartbreaking. More than once I got teary-eyed as we learned about his past - and present – angst. The more that I read, the more that I just wanted him to get through it and to start to feel human again. One of my favorite things about Dylan was that he let Jenny and Sarah fight their own battles. While he supported them and could played the Big Man Hero, he trusted both to deal with their own issues – I loved that. Jenny's back story was also heartbreaking, but it was also really sweet, which might sound strange once you learn about it. I loved her devotion to the past (trying to be vague) and the way she tried to honor someone who deserved that devotion, while also living her own life and being her own person. Put those two damaged but great characters together and you have a couple of fantastic characters who just deserved to be happy together. It would have been impossible to root against them.

Ms. Owens also nails small-town life perfectly in this book. Blue Ridge Valley was the epitome of a small town, complete with characters who filled the book with funny moments and fun stories without overpowering the main story. I really enjoyed the foreshadowing and hints about the next book and I am already looking forward to it coming out.

If you're a fan of books that have a huge amount of heart and humor wrapped around a mystery theme and that also has the ability to make you tear up, you should read this book. I highly recommend it.
Read more
11 people found this helpful
Helpful
Report abuse

T.
5.0 out of 5 stars Small town romance at it's best...
Reviewed in the United States on June 26, 2018
Verified Purchase
Just Jenny is the first book in Ms. Owens new, Blue Ridge Valley series. It follows 3 childhood girlfriends. Jenny, Autumn and Savannah. Jenny is first up in Ms. Owens first small town series. I love small town romance. And this is probably Ms. Owens best work to date. Probably my absolute favorite of all her books. And I love everything she does. I loved the new police chief, Dylan Conrad. I think he'll go down as my favorite Sandra hero forever. And again, I love them all. Dylan was perfect. Just what a hero should be, kind. Honorable. A gentleman. And drop dead gorgeous! Swoon worthy. I was impressed with the way he ran the police station.I literally swooned every time he called Jenny 'Jenny Girl.'I really liked that each chapter alternated between heroine and hero's point of view. I like when authors do that. I loved all the quirky small town characters. Hamburger Harry and his mother cracked me up. I don't know how she does it, but, Ms. Owens continually outdoes herself. I'm looking forward to All Autumn.
Read more
3 people found this helpful
Helpful
Report abuse

Vee
5.0 out of 5 stars Blue Ridge Valley Rocks!
Reviewed in the United States on June 28, 2018
Verified Purchase
I get very excited every time Sandra releases a new book because I love her writing and know I will be taking a wonderful journey with her incredibly charismatic characters. Jenny is sassy, and incredibly strong. Losing her twin sister at a young age has given her life focus and determination. Travel was her goal until Police Chief Dylan came along.
Dylan is my hero. I’ve fallen hard for this special guy. He is lovable, loyal, good hearted and devoted to making the world a better place. His interactions with everyone in his new home town was very entertaining. Just like Jenny I kept finding more reasons to love him.
Loved the instant connection between Jenny and Dylan. They compliment each other perfectly. Their story was a joy to read.
There are also lots of wonderful side characters like Daisy & Hamburger Harry. They add a wonderful dimension to the story.
Sandra knows how to pace her stories beautifully because once I started reading I couldn’t stop.
I found the story very relatable and so the thoughts and emotions are real and felt strongly throughout. Whether I was laughing or crying with the characters, I was right there alongside them. Brilliant! I am very excited to continue reading the Blue Ridge Valley series. Highly recommended!
Read more
Helpful
Report abuse

Tracy DeNeal
5.0 out of 5 stars Jenny and Dylan
Reviewed in the United States on July 1, 2018
Verified Purchase
This is the first contemporary novel I've read by Sandra Owens. I'm a huge fan of her historical novels, so I thought that I'd start with this new series. Am I glad that I did? Absolutely!

I loved these characters. I feel like the biggest small town gossip because I was eating up the details of everyone's lives, plotting matrimonial setups, my mouth was watering over Mary's doughnuts and I was tittering about each of her hair color changes just as if I was working at the town gossip rag with Gloria.

Dylan Conrad is an excellent hero. I loved him. Who wouldn't want to meet and be loved by a man like him. Jenny is a lucky girl.

I can't wait to read Autumn's book next month. I knew she needed an HEA. Just because she had a wedding in this book didn't mean he was the one! Poor Savannah, I'm sure her book will break my heart.

Collecting cats? When I read that line, my mind immediately went back to my favorite Sandra Owens book - The Letter. Time for another read!

I loved this book. It was well written. The setting was so perfect. I felt like I was right there. The plotting was excellent. Read it, you won't be disappointed!
Read more
Helpful
Report abuse
See all reviews

Teresa
3.0 out of 5 stars New ok I'm town
Reviewed in the United Kingdom on June 9, 2021
Verified Purchase
I'm new to this author but when I saw the storyline in a small town I thought yeah just what I like (love Kelly collins) so I thought this might be like hers.It did not disappoint but there was a moment in the book I thought dragged but it did pick back up.I thought the bad cop was going to kidnap Jenny or even his old partner jack.but glad she did not go down that obvious path.but I did feel the hype with Jack was a let down. Who was the other guys his old boss showed up with? I enjoyed the read and will continue the series, the marks down is only because there was a few things I would of liked to read differently and because of the drop in the book about a 100 pages in.but this is book one so room to grow x
Read more
Report abuse

I have to say I absolutely loved this new book from Sandra Owens. It has heartbreak, humour and heat aplenty.

Sandra is a fantastic storyteller and can pull you into the lives of her characters so completely and thoroughly that you find yourself thinking about them at random times throughout the day.

I could wax lyrical about this book, but I honestly think this book needs to be discovered as you read it yourself - as they say the proof of the pudding is in the eating - or maybe that should be glazed doughnuts.

P.S. I highly recommend all of Sandra's books - The Aces & Eights and The K2 series will have you hooked in no time.
Read more
Report abuse

Jersey girl
5.0 out of 5 stars Great new series
Reviewed in the United Kingdom on June 30, 2018
Verified Purchase
Really enjoyed the first book in this new series.
Has a great mix of characters and a good storyline.
very enjoyable
.
Read more
Report abuse

jacquelyn
5.0 out of 5 stars Engaging characters in interesting situations and an easy to follow story line including humor and passion. A very enjoyable reading experience.
Reviewed in Canada on May 1, 2020
Verified Purchase
I couldn’t put it down. Enjoyable reading and well worth the time. I am looking forward to the next in the series.
Read more
Report abuse
See all reviews
Back to top
Get to Know Us
Make Money with Us
Amazon Payment Products
Let Us Help You
EnglishChoose a language for shopping. United StatesChoose a country/region for shopping.
© 1996-2021, Amazon.com, Inc. or its affiliates