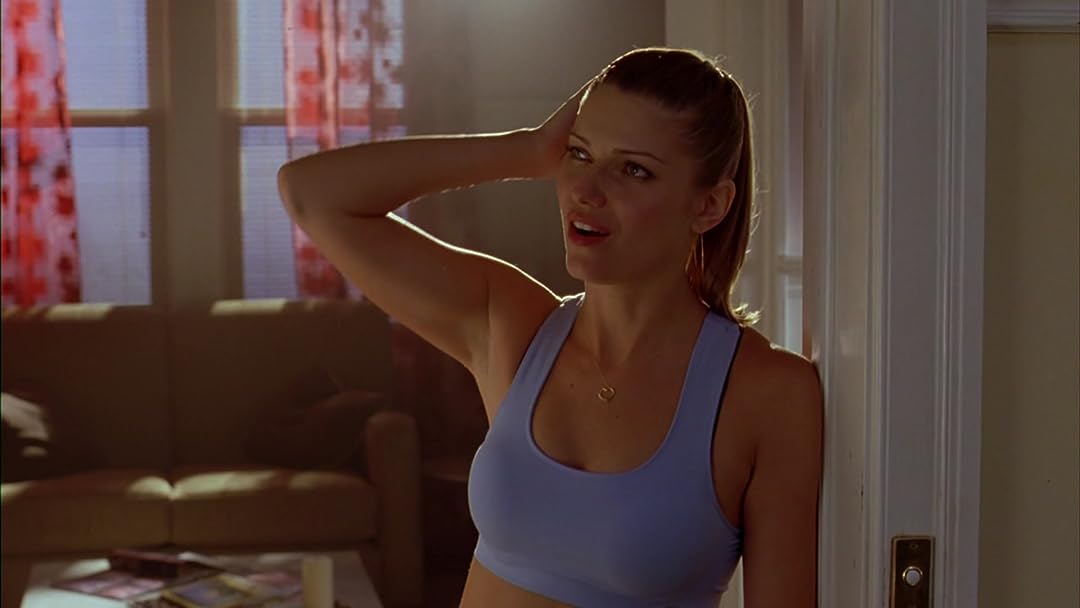 DominiqueReviewed in the United States on November 26, 2018
4.0 out of 5 stars
Guilty Pleasure
Verified purchase
Good for a night you just want to sit with a tub of ice-cream and cry over the fact that it's almost certain you'll never meet Mark Ruffalo; Never mind getting the chance to sweep him off his feet and marry that adorable face.
17 people found this helpful

TeriReviewed in the United States on August 9, 2021
5.0 out of 5 stars
JUST LIKE HEAVEN (2005)
Verified purchase
Just Like Heaven is a romantic comedy fantasy movie. Elizabeth Masterson (Reese Witherspoon), is a young emergency room physician in San Francisco, who has no time for love because she works a lot. On her way to a blind date, she had a serious accident. Three months later, David Abbott (Mark Ruffalo), a landscape architect, who is recovering from the loss of his wife (who died of brain aneurysm x2 years ago), is looking for a place to rent. He moves-in to Elizabeth’s apartment fully furnished, and he specifically likes her couch. STRANGE THINGS ARE HAPPENING TO HIM IN THIS APARTMENT, AND HE DOES NOT KNOW WHY HE IS THE ONLY ONE WHO CAN SEE AND TALK TO THIS SPIRIT. He had the place exorcised, but the spirit stayed. However, they begin to bond. He takes her out of town to a beautiful landscaped garden he designed. She tells him it looks familiar (that she saw it in her dreams before, but cannot remember where). With the help of Darryl (John Heder), the psychic bookstore clerk, David and Elizabeth investigate to find out who she is. It led them to a hospital, find she is not dead but in a coma in a hospital where she works as a physician. Her body is being kept alive on life support for the last three months there.

When David discovers that she will be disconnected from this breathing machine, and will be allowed to die soon, he made plans. But when he told Elizabeth's sister Abby (Dina Waters) the truth, she thinks David is a lunatic and drives him out of the house. In desperation, he asks Jack (Donal Logue), his friend and therapist, to steal her body from the hospital. At the bedside, Jack recognizes her face, stating she was the "no-show" blind date he arranged for David, that the reason he could see her is because they were meant to meet. David admits that he loves Elizabeth, that he does not want her to die. In the commotion, they were discovered by the hospital security guard, wrestled David down on the floor, pulled Jack from Elizabeth in the hallway, accidentally pulling her breathing tube. David saw the dying Elizabeth on the gurney, wrestled his way out from the security guard and frantically kisses her. Amazingly, her heart beat returns and awakens from the coma. But she does not remember anything about it or David. She pulls away her hand when he tries to touch her. David leaves the room sad. After discharge from the hospital, she returns to the apartment. She is drawn to the rooftop, and sees a beautiful landscaped garden there. David is there. Apparently, he landscaped the rooftop while she was recuperating at the hospital (by entering and using the spare key she shared with him as the spirit Elizabeth). Just as he is about to leave, she asks for her key back. When their hands touched, she remembered everything about David, and they kissed passionately. A very inspiring movie, wow. It reminds me of Sleeping Beauty and the Prince’s kiss, but this is better. Much more realistic. Mark Ruffalo and Reese Witherspoon have 100% chemistry together. I have watched it 5x already. I rewind the DVD to the hallway dying scene multiple times, watch and observe the faces of those people around them during this emotional moment. Precious emotions.

painterReviewed in the United States on September 16, 2018
5.0 out of 5 stars
Just Like Heaven
Verified purchase
This is a sweet, rather predictable movie with two stars that I like. Without giving too much away, Reese's character (a doctor) is sort of hung between living and death and while there she hangs around Mark Ruffalo (who is the only one who can see her) driving him crazy

There are some howling funny scenes in this movie, one especially when there is a medical emergency and Reese has to tell Mark what to do to save a guy's life. This is the kind of humor that Mark R excels at, with his goofy, boyish charm. Anyway, I recommend it to those who like romantic comedies. If you're a fan of these two talented people then go for it!

K. PetersonReviewed in the United States on June 24, 2019
4.0 out of 5 stars
Enjoyable Entertainment
Verified purchase
I will start by saying this is a chick flick but I have now watched it more than once and still found it entertaining and worth watching repetitively, my husband has not viewed it once.
If you are looking for realistic or crime or documentary, don’t bother it is none of those. If, on the other hand, you want a sweet movie starring Reece Witherspoon and one that won’t give you nightmares or keep you awake with dire thoughts of world destruction this movie fits the bill.
2 people found this helpful

seaheatherReviewed in the United States on September 24, 2019
3.0 out of 5 stars
NOT TOO CREDIBLE, SOME CHARM, GREAT APARTMENT
Verified purchase
If you like Witherspoon and Ruffalo you will probably like this. Though it's a stretch. The screenplay relies heavily on low-expectations in the reality department. 'Touching' someone who is a 'spirit' is an issue throughout and not one that the writer spent much time thinking through. Sometimes the touching works, sometimes not -- one of those times being when the 'spirit' character attempts to reconnect with her own comatose self but somehow can't 'stick'. This lack of 'sticking-ness' pervades the overall credibility of the narrative and interferes with the romance, which otherwise might be affecting. The comedy doesn't work either given the serious pathology at center stage casting its morbid shadow. However, for those into decor and homey vibes, the San Fran apartment with views of the city and Golden Gate , bay window and old world ambience, steals every scene it is in.
One person found this helpful

Kira S.Reviewed in the United States on January 5, 2020
4.0 out of 5 stars
One of the best rom-coms I've seen in a while
Verified purchase
After watching about four stinkers during my 7-day free trial of HBO, I finally found a winner. Yes, it's silly, like most rom-coms are, the premise is ridiculous, but it's fun and romantic and uplifting. If you just want a good time without thinking too hard, with two stars who have excellent chemistry and are fab actors, this is the movie for you.
2 people found this helpful

David BowerReviewed in the United States on April 20, 2014
5.0 out of 5 stars
Rented it, Watched it, Bought it!
Verified purchase
Totally captivating, fun, romantic, sad, touching, funny and definitely worth watching many times. When we rented this movie I had not read anything about it but thought it might be one my wife and I would enjoy. Enjoy it we did to the point that after watching it for the first time, I immediately ordered it from Amazon for our collection of movies we'll want to see again and again.

Everything about the movie works and draws the viewer into a story about people for whom it is easy to care. Reese Whitherspoon plays the part of a devoted doctor whose life takes an unexpected turn which causes her to meet a young man named David, played by Mark Ruffalo. Their efforts to sort out their remarkable situation is supported by a completely appropriate supporting cast who turn in beautiful performances.

The director, Mark Waters, does an admirable job of pulling the whole thing together into a delightful evening's entertainment. I'm already looking forward to seeing it again!
14 people found this helpful

Public VoiceReviewed in the United States on May 17, 2021
5.0 out of 5 stars
Great movie
Verified purchase
This is a really good feel good movie. I first saw this movie a few years ago and didn't give it the chance I should have because it starred Reese Witherspoon and by this time she had become really difficult to work with in Hollywood, but still I should not have held that against the movie. So I watched it again and gave it the chance that it deserved. And the movie turned out to be really good. Really good feelgood film. Give this movie a try.
See all reviews
Back to top
Get to Know Us
Make Money with Us
Amazon Payment Products
Let Us Help You
EnglishChoose a language for shopping. United StatesChoose a country/region for shopping.
© 1996-2021, Amazon.com, Inc. or its affiliates