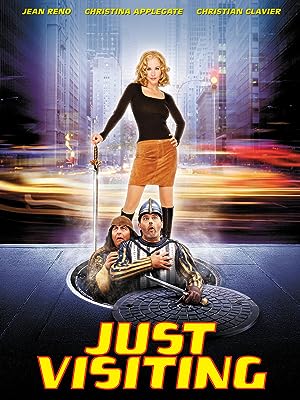 J. MoserReviewed in the United States on March 6, 2021
3.0 out of 5 stars
Good Movie Bad Disc
Verified purchase
Really enjoyed this movie in the past, purchased the Blue Ray version for a gift for quality and extras. The container stated that it was for USA Blue Ray but "may not play on some machines" ??? When inserted in my Samsung Blue Ray player there were no menu options given to start the movie - no "play" or "settings," just the cover photo and looping music. When inserted in my Panasonic Blue Ray it played, but about 1/3 in it started to freeze. By 2/3rds in it was skipping badly, pixelating on the screen & the sound was cutting out. I didn't try it on my computer because I don't care to watch movies on that small a screen. Perhaps the standard version works better?

James R. LeClairReviewed in the United States on December 29, 2019
1.0 out of 5 stars
WTF?
Verified purchase
Can I do zero stars? I am amazed by the positive reviews. This is yet another british/european movie/tv show remake that is unwatchable. Not saying the original was high art, but compared to this it is a Shakespeare. Did they employ out of work, third level sitcom writers to write the script? They must have, because the humor is predictable, shallow, and unoriginal. Shouldn't be surprised as American remakes of other great shows like Coupling and Red Dwarf have been equally as lame. $3.99 I wish I could have back.
2 people found this helpful

Claire B.Reviewed in the United States on January 23, 2017
5.0 out of 5 stars
Awesome for the whole family. Laugh your bottom off funny.
Verified purchase
Hilarious and fantastic. We have seen the Visitors that is a french version of this movie,
the original first movie that was made, it is with the same main actors but it is happening
in France. This one is happeing in USA.
they are both fantatstic and kids love them to pieces. Absoulutely fabulous to watch
for the whole family.
I like Christine Applegate but she never looked more fabulous and acted more spectacular
then in this movie. She was great in the Christmas movie with Affleck but in this one
she is just beyond brilliant! Amazing acting.

Retired Soldier/Sailor.Reviewed in the United States on May 14, 2016
5.0 out of 5 stars
JUST sayin'... JUST VISITING isn't "just" funny. It's a masterpiece... almost as good as the original FRENCH version.
Verified purchase
I already HAVE the Digital Video Disc-----L=O=V=E this time-travel comedy-----purchased
the Blu-ray because the price was amazing [and, it IS at the, proper,2.35:1 aspect-ratio].

IF Peter Sellers made a time travel movie, it COULDN'T be any more enjoyable to watch.
Wet your pants funny; watch it with someone you love (but NOT gran'ma!)

That ACPress GuyReviewed in the United States on April 9, 2015
5.0 out of 5 stars
A comedy the whole family can enjoy
Verified purchase
Like me, you may have totally missed this gem when it came out in 2001. It is just plain funny without vulgarity or cheap sex jokes. Mr. Reno does a great job of a person trying to retain a 12th century mindset while confronted with 21st century "culture." He reminds us that people in the 12th century were not stupid, just, well, in the 12th century!

His aid (a serf) is very slapstick, and you will crack-up over the scenes involving the "magic blue fountain" and forest fresh mints! Christina Applegate does well with deadpan humor. There is a subtle, almost wistful undertone surrounding past times when men were honorable and brave, despite the totally outrageous plot. The very few vulgarities are often delivered with French accents and there are no sex scenes, so I suggest this is one the whole family can enjoy.
8 people found this helpful

Steven DwyerReviewed in the United States on July 11, 2017
5.0 out of 5 stars
A Visitor From the Past
Verified purchase
I wish Ive seen this movie sooner. Ive always been a fan of Christine Applegate and I always loved her in Dont Tell Mom the Babysitters Dead and of course Married With Children. She's so super talented. After finding out I'm related to her and her 7th cousin I was astonished! This movie is right up my alley since I do ancestry and her ancestor coming from the past of the 12th century France and running into her is a fantastic story. It was original. They didnt know what anything is we have nowadays and when they get to the millennium and and its so funny.
5 people found this helpful

AugustineReviewed in the United States on September 1, 2021
4.0 out of 5 stars
Mindless romp
Verified purchase
First of all, how did they get Jean Reno to star in this movie? It must have been a decent pay day for him as he walks thru his part without breaking a sweat. The premise is funny and if you can get past the actors going through the motions there are a couple funny parts. Good to watch with the kids.

David W. FaulknerReviewed in the United States on January 12, 2017
4.0 out of 5 stars
A Fun, Clean Story!
Verified purchase
What would a French knight and his squire, or slave, do in Manhattan?

Moral of the story, don't mess with magic, so much can go wrong!

It is of course funny to see how high society would react to a servant eating in a fine restaurant on the floor!

If you would like to have just a funny, or cute, movie to watch with little violence or foul language, this might be the story you're looking for!
4 people found this helpful
See all reviews
Back to top
Get to Know Us
Make Money with Us
Amazon Payment Products
Let Us Help You
EnglishChoose a language for shopping. United StatesChoose a country/region for shopping.
© 1996-2021, Amazon.com, Inc. or its affiliates