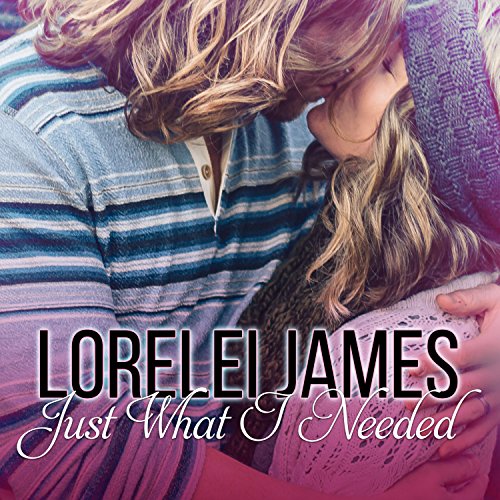 Just What I Needed: Need You Series, Book 2

Trinity Carlson might be having the worst day ever. And that was before she started drinking in a dive bar, right across from her ex and his new girlfriend. So when she finally decides enough is enough, she grabs hold of a hot blond stranger and gives him the kiss of his life.

Walker Lund never expected that a chance at love would hit him right on the mouth. Since the moment his brother decided to settle down, Walker has been dodging his family's hopes that he'll do the same. He's never been interested in following in anyone's footsteps. But when he discovers his sexy assailant has given him a fake name and number, he suddenly finds himself in the mood for a little hot pursuit.

Special invitation from Audible!
Learn more about Membership
List Price: $27.99
You Save: $4.04 (14%)
By completing your purchase, you agree to Audible’s Conditions Of Use
Sold and delivered by Audible, an Amazon company

Amazon Customer
5.0 out of 5 stars I've fallen in love with Trinity & Walker!!!
Reviewed in the United States on August 3, 2016
I've fallen in love with Lorelei James 'The Need You Series'The first book in the series introduces us to the Lund family and we get to fall in love with Brady Lund and Lennox and their beautiful journey.The second book in this amazing series tells the beautiful story of Walker Lund and Trinity.I love, love , love this couple!!!!!I was hooked right from their first chance meeting(Wow)!!!I loved Walker's patience, determination, honesty and never give up attitude when it came to Trinity AND Trinity's querky sense of humour, honesty, creativity and acceptance in the end that love conquers all and she is indeed worthy of Walker's love. We also get to fall in love with the Lund extended family members and witness the family comaraderie.Walker's parents are absolutely amazing, Mama Lund's love and protectiveness of her loved ones(including Trinity) are fierce and watch out to anyone who disrespects her family. Loved Walkers cousins, brother and sister, especially their boat intervention!!!!Thank you Lorelei James for sharing Trinity and Walker's amazing love story and I cannot wait to read all the other Lund family stories in this series!!!!!!!
Images in this review

Donna M. Brown
5.0 out of 5 stars You NEED to read James's latest!
Reviewed in the United States on August 2, 2016
Verified Purchase
When Trinity Carlson’s dreams of becoming a famous artist are shattered and her sister gets the family pearls, she goes to a dive bar to drown her sorrows. When she sees her ex and his girlfriend there, it’s the last straw. Starved for a relationship and angry to boot, she grabs the next guy she sees and plants a whopper of a kiss on him. Walker Lund is not so surprised that he kisses her back. In fact, he enjoys it so much, they spend the rest of the evening together. He gets her name and number, both false, and hopes to see her again. Fruitless in his attempts, he gives up hope until they appear at the same charity workshop. Will they work things out given this second chance or will secrets keep them apart?

JUST WHAT I NEEDED is a wonderful follow-up to WHAT YOU NEED. Although each may be read as a standalone, you should treat yourself to both. You will enjoy Walker and Trinity’s journey to their happily-ever-after as they both grow emotionally and personally. Although not as sexy as Ms. James’s usual fare, there’s plenty of spice. Lively banter keeps things interesting in this fast-paced story. I enjoyed this book immensely and would recommend it to all readers of delightful contemporary romance.

Ginger L. Savage
5.0 out of 5 stars Loved it!
Reviewed in the United States on August 2, 2016
Verified Purchase
I received an ARC of this book which did not impact my review at all!
Just What I Needed is the second book in the Need You Series by Lorelei James and features Walker Lund the “lumbersexual” hottie of the Lund Family. Walker, is the lost soul of the Lund Family, the quiet more reserved sibling who has always loved to build rather than be part of the family empire. Walker is one of my favorites of all of Ms. James heroes. He is thoughtful, brainy, kind, independent and a hard worker. He meets artist Trinity Amelia Carlson, a bit of a lost soul struggling to make sense of a life that is a sad and lonely. The sparks fly between these two instantly. There was a moment after a couple of chapters that I fell into the book and was nearly late for work. The buildup of this romance was quite long and worth every minute of it. I wanted to take a stick to many of the Lund Family members in this story as in the “over-achiever” mode they lost track of Walker. Highlights of this book were Selka Lund speaking her mind on the step-monster. I wanted to stand and applaud! I also loved the way that the Lund Family mended their fences and made right with Walker and Trinity. This story is all about how people cannot be defined by who their parents are and what they are occupation is. We get glimpse of the next books in the Lund Family line. My only negative is that the book ended a bit flat and abruptly for me… I always love a really juicy epilogue. But all in and all a great book! Thanks Ms. James!
Read more
5 people found this helpful
Helpful
Report abuse

Kayreader
5.0 out of 5 stars A New Must Read in the Need You Series! p.s. You’ll fall in love with Walker Lund
Reviewed in the United States on August 2, 2016
Verified Purchase
A second book, told in first POV, in a hot new contemporary series by Lorelei James. This book catapulted my love for the hard working outdoorsy man right back to the top of my heartthrob list. The Lund men have proven to have it all whether they don a suit or wear flannel. I need a Lund man in my life.

Trinity Carlson is completely relatable. I found myself thinking, “This is me. I feel the exact same way.”
Trinity is quirky, funny and like many of us, full of self-doubt. She’s an artist and sold numerous paintings, sculptures, mixed media; you name it and Trinity has a hard time locking down her one true specific art craft. Yet, every time she is commissioned she wonders if she is good enough. Her history and background don’t help squash those feelings, but I’d like to believe it’s a human trait we all share. Whether you are a lawyer, a baker, a swimsuit model, or a stay at home mother it is a battle we all face. At some point we stop and ask, “Am I good enough?”

Walker Lund is my new favorite book boyfriend. The rough hands, the man-bun, and his soft beard. The man screams hot, sexy male. Yet, underneath the rough exterior is a gentle heart, of what I believe, is the sweetest Lund of the family.
Walker runs a construction business with a partner that is not a fellow family member. He feels he is the black sheep of the Lund family tree because of his choices that led him down a different path than his brothers/sisters/cousins, but as you get to know him you see that he is the one that everyone in the family turns to when they need help. Walker Lund is swoon worthy on every level and checks off every box for hunky, hot and down right panty-melting. I’m really hoping Lorelei knows him personally and this entire story is actually a biography. ~Sigh~ A girl can wish.

The sexual tension between Walker and Trinity was enough to pretty much melt my iPad. Roting for these two was easy and I couldn’t stop reading once I started. If you read the first book (which you don’t have to because this book reads easy on its own) you will love catching up with the entire Lund family. Lorelei has a knack for building families you can’t wait to catch glimpses of.
Read more
4 people found this helpful
Helpful
Report abuse

K.Dow
5.0 out of 5 stars Get Ready To Fall In Love!
Reviewed in the United States on August 2, 2016
Verified Purchase
What I Needed is just what this book delivered. I honestly did not think I would like this one better than the first in this series but boy was I wrong! I LOVED this book! Walker and Trinity are the perfect ying and yang. I loved that Lorelei made Trinity quirky and imperfect, just like women are. She kept her real and didn't make her all conform to what the man wanted. And Walker??? Sheesh what can I say about him other than he's the perfect man! Now he has his own issues, again, something I love that Lorelei does to her characters, but he is just so sweet. The way he cares about Trinity is just the bomb!

Lorelei writes her characters so they pull you into their world. You feel what they feel and want them to succeed. I have read everything this author has written and I can honestly say she keeps getting better. Read this series, you will not regret it and hey, you may just fall in love with these characters like I did.
Read more
7 people found this helpful
Helpful
Report abuse
See all reviews

Custard2013
3.0 out of 5 stars This series was an “ok”read
Reviewed in the United Kingdom on January 1, 2018
Verified Purchase
Series was not bad, but not a series I would go back an read again.
Read more
Report abuse

Alison
4.0 out of 5 stars Four Stars
Reviewed in the United Kingdom on September 23, 2016
Verified Purchase
Love this author, this took a bit of getting into, but turned out to be a good read.
Read more
Report abuse

Karen’s
5.0 out of 5 stars Good read
Reviewed in Canada on September 5, 2016
Verified Purchase
Well written and keeps you turning pages. Looking forward to the next one.
Read more
Report abuse
See all reviews