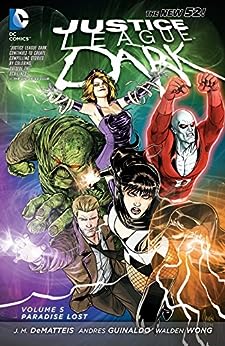 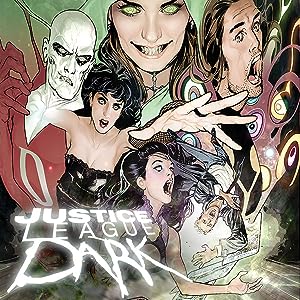 "Worthy of the adjective, but in a good way."—The New York Times

"There are some threats that are too much for even Superman, Batman and Wonder Woman to handle...That's when you call the people who make magic their method."—Craveonline --This text refers to an out of print or unavailable edition of this title.

J.M. DeMatteis doesn't make much sense to us. One day he's writing spiritual-infused titles such as MOONSHADOW and SEEKERS INTO THE MYSTERY. The next day he's writing funny books like MISTER MIRACLE or DR. FATE. Then another day he's doing super-hero work on The Amazing Spider-Man and Captain America. Still another day he's dipping into the fantasy realm with Abadazad. Make up your mind, Marc! --This text refers to an out of print or unavailable edition of this title.

R Moses
4.0 out of 5 stars Justice League Dark is deLIGHTful !!!
Reviewed in the United States 🇺🇸 on January 3, 2017
Verified Purchase
J.M DeMatteis continues to impress. No one takes you so close to the edge.
Read more
One person found this helpful
Helpful
Report abuse

Clovermagician
5.0 out of 5 stars Came in early and in great condition!
Reviewed in the United States 🇺🇸 on April 21, 2019
Verified Purchase
Thanks
Read more
One person found this helpful
Helpful
Report abuse

Michael
4.0 out of 5 stars JL Dark Doesn't Disappoint
Reviewed in the United States 🇺🇸 on April 10, 2015
Verified Purchase
Another great one from DC.
Read more
One person found this helpful
Helpful
Report abuse

Jarred Blackburn
5.0 out of 5 stars justice league dark vol 5 nightmare nurse's origins revealed
Reviewed in the United States 🇺🇸 on September 4, 2018
the story at the end kind of had had me lost but the first part made sense to me entirely like how did they even wind up in that dimension in the first place?The fallout from the Justice League Dark's battles with Blight and the Trinity of Sin, during the DC crossover event Forever Evil, has left the team in tatters. Zatanna assumes leadership of the team and prepares to rebuild. With team members angry and confused by Johns Constantine's methods during the fight with Blight and the Trinity of Sin, how will John Constantine fit into this new team, if at all?

Stranger
4.0 out of 5 stars Back to Business
Reviewed in the United Kingdom 🇬🇧 on March 16, 2015
Verified Purchase
After the events of Trinty War and Forever Evil: Blight it's back to the day to day with the JLD, after the end of the previous volume the team is a bit in upheaval, Constantine having cut and run has been replaced by Zatanna as both team leader and as owner/partner of the House of Mystery, Frankenstein and Black Orchid have decided to leave the team and Madam Xanadu is well completly absent from this volume but then she has effectively not been with the team since the start of Trinity War so fair enough, Nightmare Nurse and Swamp Thing having joined to fight Blight have stuck around to join permenantly, Deadman thankfully is still around too.

This volume is split into three sections a three part story which deals with the new status quo and Constantine's action but also gives a lot more information on Nightmare Nurse, a two part story centred on Deadman (a long overdue Deadman story in my opinion) and the Future's End tie in with a slightly different team, which like all Future End tie ins is fun enough but lacking any real substance. (and thats all I will say on that)

The Nurse story does a good job of fleshing out a character who up until now has been a bit of a mystery, she was faily instrumental in the fight against Blight but apart from a few odd bits of information we know very little about her, this story fixs that whilst also deals quite well with how John Constantine fits into a team he used, betrayed and generally screwed over, it's also a good showcase of Zatanna as the team leader a decision that makes sense, really would anyone willingly follow Constantine anywhere.
The Deadman story explores a little bit of his past but also his connection to the mystical city of Nanda Parbat, Boston Brand has slowly become the heart of the JLD with his easy going ways, his surprisingly smooth moves for a dead guy and just his good nature he really is a great character and to finally have a story where he rather the Constantine, Zatanna of Xanadu taking center stage is really nice to see, the villain is a little forgetable and the ending a bit obvious but it's a fun little story that helps bed in the new team line up, so it's forgiven it's few faults.
The Art throughout is of a good standard, the various spells and monsters are all well realised and really draw the eye well.

If you have enjoyed the series so far this is really a return to what it was before the events disrupted matters, a nice set of self contained stories that help to set up the new team whilst also pushing foward character development in most areas, Swamp Thing and Nightmare Nurse are good additions to the team and the slightly less heroic untrustworthy Constantine no longer under the burden of having to be the centre of things is probably a good thing.
Read more
One person found this helpful
Report abuse

John P. Gallagher
5.0 out of 5 stars Five Stars
Reviewed in the United Kingdom 🇬🇧 on April 4, 2015
Verified Purchase
Arrived safely. Thank you!
Read more
One person found this helpful
Report abuse
See all reviews
Report an issue
Does this item contain inappropriate content?
Report
Do you believe that this item violates a copyright?
Report
Does this item contain quality or formatting issues?
Report