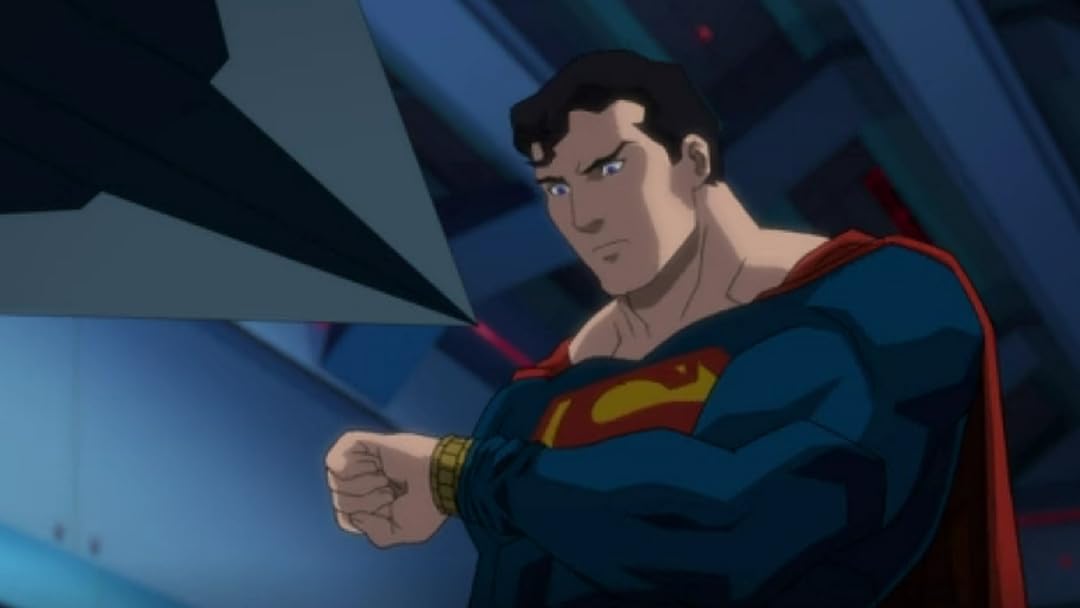 BrittanyReviewed in the United States on May 5, 2020
5.0 out of 5 stars
This better not be the last movie like they say it is....but that doesn't mean the end is the end
Verified purchase
The voice actors did a spectacular job!!! I can only imagine what was going through their minds when they were reading the script and were seeing where the movie was going.

The music (especially Flash's scene) made me cry!!!

Some scenes I ONLY EVER see in Anime and was SHOCKED to see those types of scenes in an American "cartoon" - if you can call this movie a cartoon. The shadows and darkness kept heightening what the experience you were feeling and seeing as you watched this movie. It kept making it seem the end was the end.

Knowing this was part of a 15 movie series - you were able to see so MANY characters return and the voice actors had as much spunk in this movie as the previous ones. Constantine and Captain Boomerang's little fight cracked me up!!!

Mike and DinaReviewed in the United States on May 10, 2020
1.0 out of 5 stars
Confusing and Disappointing - Spoiler Review *Updated June 2020
Verified purchase
As someone who has seen every DC movie and as one who owns every DC movie, this was such a let down, a tremendous disappointment. The writing was at times, incoherent and shallow, then predictable and at other times just awful. The direction was even worse. What was done to DC's pantheon of heroes was done as if someone from Marvel was writing the script and wanted to destroy everything that had been established concerning the characters for decades. But then again, I cannot see anyone who is a fan of Marvel enjoying what was done in this animated feature out of respect to heroes everywhere regardless if they are DC or Marvel. We sat silent the whole movie, looking at one another and shaking our heads as the film progressed. There were so many missed opportunities to make this a great film. Here is a pointed example - a few minutes into the movie I knew Trigon was going to be released to fight Darkeid, yes it was that easy. Oh, the way it ended - don't hold your breathe, it ends so poorly you will have more questions and you will not be satisfied...at all. I forgave you DC for the Killing Joke and Batman and Harley Quinn movies but you are pushing it with this waste of one hour and thirty minutes of my time.

Watched it again - even worse than before. We gave this a second chance today, we have even more questions, found
even more mistakes in writing, direction, plot development and we are even more irritated concerning the movie. DC is demonstrating so much potential in so many ways, this was a step back.
36 people found this helpful

RachelReviewed in the United States on May 5, 2020
2.0 out of 5 stars
What Was The Point
Verified purchase
The build up from the previous movies to this made me incredibly excited for this, just to have it completely bomb. Too many cliche plot points and disregard for character development. Personally, did not like it.

* had to add in: the voice actors and actresses did an AMAZING job, so much credit to them and their work.
39 people found this helpful

Tin NgoReviewed in the United States on May 6, 2020
4.0 out of 5 stars
What a Wild Ride!!
Verified purchase
A little background about myself. I watched all the DC New 52 Animated movies (Flashpoint, Teen Titans, The Death of Superman, etc), a handful of animated movies before FlashPoint, and DCEU Live Action movies. I was going into this movie blind because I don't really know the comics of this movie nor do I read comics.

NON SPOILER:
Overall, I thought the movie was good, but not great. There was a lot of action in the movie and I commend it for going to a dark storyline like FlashPoint. I am glad that ALL the characters from the animated universe came into this movie. The main character Robin ( Damian Wayne ), came a long way from bratty personality to maturing like Bruce / Nightwing. I personally didn't like his personality in Son of Batman but started to mature in Judas Contract. The other characters, Batman, Raven, Superman, and John Constantine had a good overall relevance in the plot. However, I wish some characters were in the plot and had more characters' interactions. Also, a few of the action scenes were cut short and it could have been resolved by adding another 15-30 minutes. In the end, the ending was bittersweet and I liked the ending. I will give more explanation in my spoiler review.

SPOILER:
Pros:
- It had a nice overall plotline with using many characters from Justice League, Justice League Dark, Teen Titans, Suicide Squad
- Never knew that I wanted a Darkside and Trigon fight and it was AWESOME!!
- As an Avatar the Last Airbender fan, I love water bending so having Mera use water Hydrokinesis was amazing.
- Nice plot twist with Zatana using a spell on Jonh Constatine and Trigon entering Superman's Body.
- Funny scenes with Etrigan
- Love the character designs of the Furies.

Cons:
- Most of the action scenes were cut short like the Lantern Corp and beginning of the movie w/ Justice League fighting. Like showing how Zatana was using all her powers in Justice League Dark before she died.
- I wish Flash had an interaction with Batman, Wonder Woman, and Superman in the last part of the movie. Like a goodbye or sorry or something. Also, a line or two with Starfire saying something to Nightwing.
- Not too much of a con, but I didn't love how Lois Lane was at the forefront of the movie, but I do get the reason why they put Lois in the movie a good chunk of the movie. I wish they substitute her for another DC superhero character.
26 people found this helpful

cornelius bellamyReviewed in the United States on May 5, 2020
3.0 out of 5 stars
"Mehh"
Verified purchase
I honestly feel like they did this movie to go out with a bang. There was one thing that did make sense, several things that were predictable, and the movie felt like a try-hard flashpoint. I guess I'm happy it's over because I hate the choices in most of the voice actors. DC should just stick to making one-shot Elseworld movies because it's clear that's the only thing they can do write. It's truly sad how bad their movies, comics, and tv shows have become.

Thank you for coming to my Ted Talk.
27 people found this helpful

Sway KrimeReviewed in the United States on May 5, 2020
5.0 out of 5 stars
The Infinity War/ End Game sort of equivalent to the DCAU's end? Amazing Movie
Verified purchase
Gotta start by saying I love, Constantine, Flash, Damian Wayne, and Etrigan rhymes (ToT) . The Tears and Laughs I had watching this went beyond what I expected from this movie. The subtle references and callbacks from previous titles were one of the coolest parts of the film. The not so subtle references from The Suicide Squad had me rolling in pain from laughter. The "Dark" tone of the movie was indeed justified given that "we've" (hopefully you did) seen the growth of nearly every character within the previous titles. The movie's length and pacing throughout certain events felt oddly rushed, making the weight of some scenes almost light. But that's kinda how it goes with movies or animation in general. Though making this movie longer or at least split into 2 parts would've been exceedingly better for the setup and arch in general, it would, however, made it feel more like MCU's ending. A few deaths did bring me to tears but were kinda "meh" when the impact was promptly reversed. All in all, Amazing movie, would give it 10 out of 10 if this would let me. Definitely am gonna recommend, but only to those who've at least seen and have appreciated the Previous 20+ other DCAU titles.
19 people found this helpful

Richard MeeksReviewed in the United States on May 20, 2020
1.0 out of 5 stars
A complete disrespectful failure
Verified purchase
DC has officially run out of ideas. Push the reset button again because even the SJW goo-crew writers can make sense of what they've created now. There's so many plot holes and randomness about this I don't even know where to begin. Basically if you've ever wanted to watch your favorite DC hero or villain either get tragically slaughtered/murdered or tortured/mutilated somehow then look no further than this. Also the award for complete trash of story potential goes to this film also. 15 movies of build up and this is what you get... I will not ever buy another DC animated film again (or comic). I will also encourage all of my friends and family to do the same. Marvel is owning DC for a reason and this movie is the cherry on top for the reason why.
9 people found this helpful

J. GutierrezReviewed in the United States on May 5, 2020
5.0 out of 5 stars
Whole heartedly Recommended
Verified purchase
Oh my God, it was truly apocalyptic; it felt so final. Victory didn’t seem like triumph. It has the unimaginable; it was so dark. Yet, it was so good. There’s a glimpse of a new beginning here. It was worth staying up late just to see it. I recommend watching this movie. This movie did what the theatrical Justice League couldn’t do.
12 people found this helpful
See all reviews
Back to top
Get to Know Us
Make Money with Us
Amazon Payment Products
Let Us Help You
EnglishChoose a language for shopping. United StatesChoose a country/region for shopping.
© 1996-2021, Amazon.com, Inc. or its affiliates