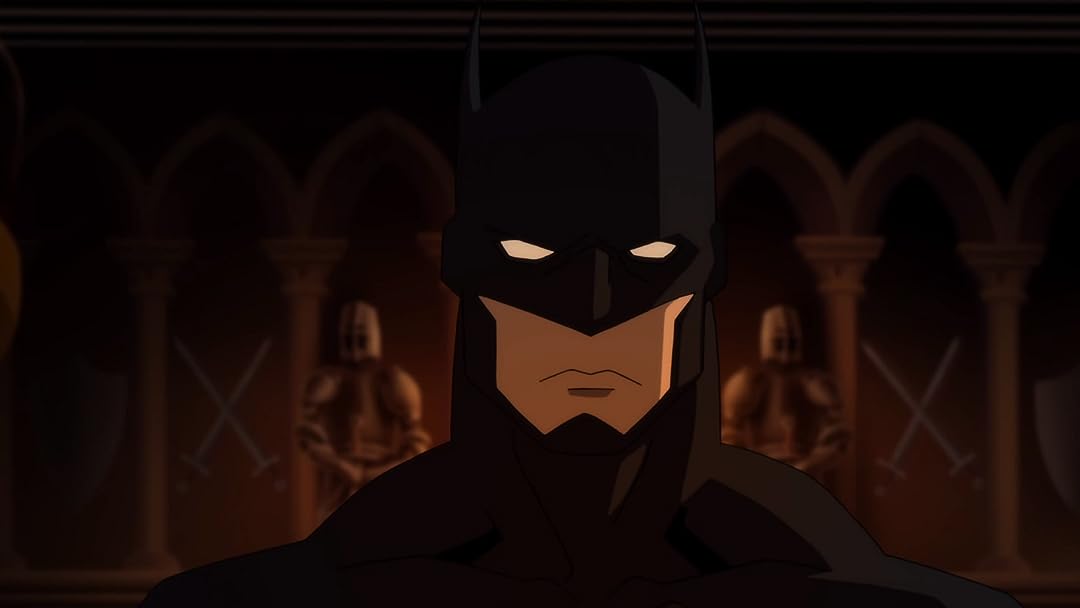 (3,053)7.11 h 15 min2016R
Batman assembles a League of mystic heroes – the likes of Swamp Thing, the Demon, and Constantine - to help defeat this magical, otherworldly threat.

MacJunegrandReviewed in the United States on January 1, 2018
5.0 out of 5 stars
One of the best DC animated films from the last few years
Verified purchase
Justice League: Dark is yet another DC DTV movie set in their revamped universe based on the "New 52" comics imprint. While the movie is set between Justice League vs Teen Titans and Teen Titans: The Judas Contract and follows the same continuity it's not directly related to neither, being a standalone side story. It's also, easily, the best of these movies until this point since the revamp, and for now the one I can see myself rewatching multiple times.

The story is as follows: all over the globe people are hallucinating others as if they were demons and monsters, causing irreparable physical and psychological damage to them and themselves. The Justice League reasons this is a mystical attack, so Batman decides to recruit the help of occult detective John Constantine in order to figure out the origin of this attack. Due to the nature of the situation, other mystical beings join the quest, temporarily forming the titular group, the Justice League Dark, as they work an uphill battle to stop the threat before an increasingly powerful villain brings humanity to its end.

Unless you happen to be one of the three people on the planet who's not familiar with Batman, you don't need to have watched any of the previous movies to understand any of these characters. All of them are well introduced and given their due. The villain manages to be quite impressive and scarily powerful. The stakes are quite high, and it's shown. It's also a film in which victory comes at a high price, and things don't neatly return to the status quo once it ends.

There's really a lot to like about this movie. The action is great, and the animation does it justice. Voice acting is pretty much top notch as well. Also, the movie doesn't waste any time with unneeded scenes, silly slapstick or irritating pop songs, like previous movies in the series would do. It's great that this movie pays attention to the often-overlooked mystical side of DC, and the fact that Batman isn't given top attention, even if the movie could easily justify it, is fantastic. I love Batman, but DC tends to be unable to show restraint with his presence.

The extras are on par to what these movies tend to offer. I am a bit sad that at some point they decided to include just 2 bonus cartoons from previous DC animation rather than 4, but the rest of the stuff is still interesting. Though I'm a bit puzzled to the inclusion of "sneak peeks" to a couple of movies that have been released years before. Also, it's curious that one of the features is dedicated to the team member with the least screen time while there's none dedicated to two of the most important ones.

In any case, I most definitely recommend this film. Probably not to children, though. They might get a kick out of the action scenes, but the general tone of the movie and the characters need a more developed mind to be appreciated. Not to mention that there are some things that might definitely scare away younger kids. Everyone else should check the film, particularly if you're into magic and sorcery.

SpiehlerReviewed in the United States on February 19, 2017
5.0 out of 5 stars
If you liked the comics or the Constantine TV show, this is a must.
Verified purchase
Excellent adaptation. Full disclosure: I am a 52-year-old comic book geek who was a comics guy (primarily DC) way before it was cool. I adored the live action Constantine TV series. (Let us speak not of the Keanu Reeves movie.)

When DC tore apart their continuity and introduced the ultimately ill-advised "New 52," there were a few bright spots. My absolute favorite: Justice League Dark. And this animated movie does a great job of taking the best of that series, adding Matt Ryan's absolutely pitch-perfect portrayal of Constantine, and coming up with a winner.

Batman is in this as something of an audience surrogate. Face it, he's easier to relate to than Zatanna, Constantine, or Deadman. And, frankly, he's a marketing move. But, it works.

Bottom line: If you enjoyed either the JLD comics and/or the NBC TV show, you're gonna love this. And I'm glad they released it as an R rating. I am the first to decry violence for its own sake, but the material here demands it.

CW Seed is getting ready to release a Constantine web series, again with Matt Ryan behind the mic. Can't wait.

And yeah, the little Constantine figure is cool!
37 people found this helpful

Amanda PikeReviewed in the United States on December 21, 2017
5.0 out of 5 stars
A better Constantine movie than the live action film
Verified purchase
After having seen Justice league Dark I really, really want to see DC animation tackle Neil Gaiman's The Sandman, particularly Prelude and Nocturns as an animated feature. This just proves the dark, supernatural, adult content from DC can be adapted into a good feature.

Justice League Dark is an excellent film with gorgeous animation and fantastic voice acting. It is a better Constantine movie than the actual Constantine movie starring Keanu Reeves. Justice League Dark can easily serve as a crash course on the mystical side of DC for any newbies to the DC continuity or just to the supernatural side of DC. It features such characters as Batman, Zatana, Deadman, Constantine, Swamp Thing, Felix Faust, and The House of Mystery.

I strongly recommend this movie and hope DC considers doing more of their occult themed stuff in animated form.
4 people found this helpful

Milan L. Jackson Jr.Reviewed in the United States on February 18, 2017
4.0 out of 5 stars
Different Kind of Justice League
Verified purchase
The DCAU hit a rough patch for a while with some subpar films. These animated films are better than the DC live action films. This is no exception. It's great to see Matt Ryan reprising his role as John Constitine from the live action series on NBC and on CW' s Arrow and also the wonderful character Zatanna. It's great to see the supernatural aspect of the Justice League. Hopefully, we'll see more of the more obscure DC characters get the spotlight. The Phantom Stranger deserve a solo animated feature as well as the Question. The Swamp Thing adds to the creepiness of the film. All in all a pretty good entry to the DCAU Add this one to your collection.
2 people found this helpful

JessicaReviewed in the United States on January 29, 2017
5.0 out of 5 stars
Great concept, great characters, and a great movie.
Verified purchase
As a long-time fan of both the concept and the characters, and also a fan of the more mature fantasy/fiction scene, I really truly enjoyed this one. The animation was expressive and dynamic as always, the characterization hit all the right (somber, serious, and sassy) notes for the JLD team, and the interactions between the characters was just the right balance between plot-driven and a little touch of personal drama, without needlessly wedging the drama in as a clumsy sideplot. After some of DC's recent comic stunts, I was worried this movie would be watered down from the essence of that dark, otherworldly, borderline satirical tone known to Constantine, Swamp Thing, and even Zatanna to an extent.. but I was pleasantly surprised, and thoroughly enjoyed this movie from beginning to end. This has to be one of the DC Animated Universe's most coherent and smoothly-plotted animated movies yet.
3 people found this helpful

StephenReviewed in the United States on February 24, 2017
4.0 out of 5 stars
Dark comes to light...
Verified purchase
JL Dark was pretty good. You get to see (literally) the dark side of the other members and a pretty good cast for them as well. Batman fits simply because he's "Dark" and all things magic related is very interesting cause Bruce doesn't buy into that even as intelligent as he is, it's cool to see him "deal" with magic up close and personal. Without giving away too much, the League is in it, but it stars those that it should on the cover. If you're tired of the usual Supers then this will be good for you as a change of pace.
4 people found this helpful

Paul S. PersonReviewed in the United States on May 27, 2020
3.0 out of 5 stars
All in All, Pretty Ordinary
Verified purchase
Yes, I am aware that this is the first DCAU Justice League movie dealing with the occult.
Or, rather, one occult threat, which is investigated and tracked down like any other.
This is not necessarily a bad thing, particularly for fans of Constantine.
And it does show how the Justice League in the next Dark film (Apokalyps) came to include Constantine et al.
But replacing SF villains with an Occult villain doesn't actually add anything special to the DCAU.
See all reviews
Back to top
Get to Know Us
Make Money with Us
Amazon Payment Products
Let Us Help You
EnglishChoose a language for shopping. United StatesChoose a country/region for shopping.
© 1996-2021, Amazon.com, Inc. or its affiliates