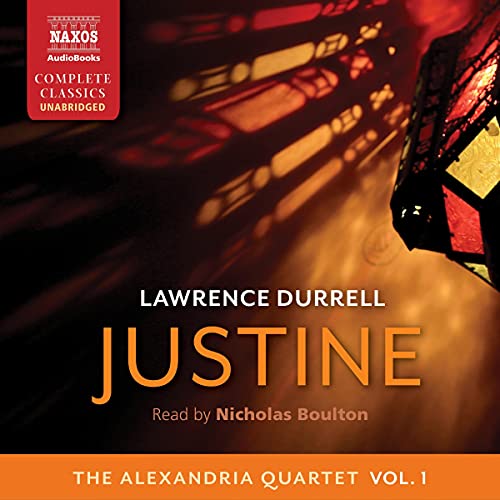 Justine is the first volume in the Alexandria Quartet, four interlinked novels set in the sensuous, hot environment of Alexandria just before the Second World War. Within this polyglot setting of richly idiosyncratic characters is Justine, wild and intense, wife to the wealthy businessman Nessim, a Mari complaisant. Her emotional and sexual wildness fuels a highly charged atmosphere that, caught famously by Durrell’s poetic language, made Justine (1957), and the three novels that complete the Quartet - Balthazar (1958), Mountolive (1958), and Clea (1960) - both a critical and a popular success.

Special invitation from Audible!
Learn more about Membership
List Price: $18.90
You Save: $2.36 (12%)
By completing your purchase, you agree to Audible’s Conditions Of Use
Sold and delivered by Audible, an Amazon company
Share

4.1 out of 5 stars
4.1 out of 5
203 global ratings
How are ratings calculated?
To calculate the overall star rating and percentage breakdown by star, we don’t use a simple average. Instead, our system considers things like how recent a review is and if the reviewer bought the item on Amazon. It also analyzes reviews to verify trustworthiness.
Top reviews

Peter S. Bradley
TOP 500 REVIEWER
4.0 out of 5 stars I am conflicted in my appraisal of this book
Reviewed in the United States on January 12, 2018
Verified Purchase
I am conflicted about this book. My mentor/friend has been recommending this to me for thirty years. He undoubtedly read this when he was in high school/college in the early-1960's, when Durrell and the Alexandria Quartet were at the peak of the notoriety. I went into the book expecting crisp prose and tight, spare plot, that would then be re-examined through the other books.

However, what I got was a literary book of florid prose and a deeply buried plot. It is said that the difference between literary fiction and genre fiction is that the former is predicated on characters while the latter is predicated on plot. This book makes that distinction crystal clear. It is almost entirely about the characters, including Justine, a kind of Jewish manic-pixie dream girl; Nessim, Justine's Coptic long-suffering husband; Balthasar, a homosexual master of Kabbalah; Pursewarden, an author whose death leaves the narrator with a bequest; Scobie, a homosexual comic-figure; Pomby, an English diplomat; Melissa, the narrator's put-upon girlfriend; and the city of Alexandria itself. The story is told by the unnamed narrator who is kind of a poor English schoolteacher who gains access to this eclectic circle of friends and acquaintances.

The narrator tells the reader at length about the backstory of all of his friends and acquaintances, including their tastes and eccentricities and interconnections and gossip and taste in clothing and residence and on and on. The introduction I read said flat out that most people would skim this book, and I certainly did.

The writing is definitely luxurious. If you like descriptions, then this is your book. Personally, I enjoyed Durrell's idiosyncratic, varied and obscure vocabulary. I added phthisic, pegamoid, adventive, calcimined, tarbush, hebetude, and couloir to my vocabulary list. I also renewed my acquaintance with palpitant, adventive, antinomian, exiguous, etiolation, tenebrous, soutane and Corniche, although I had to look them up in order to really appreciate their use in a given sentence.

Durrell can turn a phrase. Let me share a few examples:

"I return link by link along the iron chains of memory to the city which we inhabited so briefly together..." (p. 1.)

"Balthazar said quietly: ‘Thank God I have been spared an undue interest in love. At least the invert escapes this fearful struggle to give oneself to another. Lying with one’s own kind, enjoying an experience, one can still keep free the part of one’s mind which dwells in Plato, or gardening, or the differential calculus." (p. 66.)

"‘The cocktail-party — as the name itself indicates — was originally invented by dogs. They are simply bottom-sniffings raised to the rank of formal ceremonies.’" (p. 124.)

"I meant of course the whole portentous scrimmage of sex itself, the act of penetration which could lead a man to despair for the sake of a creature with two breasts and le croissant as the picturesque Levant slang has it." (p. 135.)

Don't get me wrong. These, and some others, stand out sharp and crisp in long and often difficult passages, but these are good.

It also occurred to me that Durrell's writing style might have influenced that of one of my favorite writers, Roger Zelazny. The tone and the attitude seemed to correspond, and Zelazny came to prominence in the mid to late 1960s.

There is a plot, but it is often obscured by the descriptions of characters and place. The essence of the plot is based on the unnamed narrator's affair with Justine. For 80% of the book, this is mostly buried underneath the narrator's description of the city or of the activities of other characters. Because of the emphasis on telling the story as basically a series of introductions of this character or that character, without letting us know why any character is important, the story does not even stick to a chronological format. The narrator's girlfriend is introduced at one point, then, later on, the story of how he met her is presented, and at other points, she simply disappears from the story as if he had broken up with her.

Around ten percent toward the end, we get the inkling of a plot as it seems that Nessim knows about the affair and may take dire action into his hands. On the other hand, a lot of this seems to be going on in the head of the narrator because Nessim appears to quite friendly to him.

Likewise, Durrell introduces a lot of characters whose importance is unclear. I get the sense that Scobie will be important in later volumes. Altogether too much interest was invested in him to be only something of a comic relief/plot device. Scobie does provide a source of money to the narrator, but, really, we don't see the narrator actually working to make money elsewhere. He seems to exist only to meet up with Justine at various places where he can have sex with her. Likewise, Pursewarden has a walk-on, then dies, leaving the narrator with money that will be useful at the end, but the way he is discussed seems to suggest that he is not supposed to be only a supporting character.

And the fascination with Justine, and the basis of the relationship between the narrator and Justine, are also a mystery. Their chemistry seems more stipulated to than demonstrated.

And maybe this is why this book is good literature. It has me thinking and questioning.

I was ready to drop the project of reading all four books midway into Justine, but the last ten percent of Justine seems to have hooked me and I intend to push on to Balthazar and see if I can get some answers to my questions.
Read more
180 people found this helpful
Helpful
Report abuse

E. P. Hall
5.0 out of 5 stars Oops
Reviewed in the United States on September 1, 2019
Verified Purchase
I bought this for a friend thinking it was in English. Great book, great writer, bad language. Postage back to Canada was more than I paid.
Read more
Helpful
Report abuse

pwl
5.0 out of 5 stars the go-to on the allstar team
Reviewed in the United States on December 13, 2004
Verified Purchase
If the Alexandria Quartet was an allstar team (as i think it certainly should be, put it against any series of stories, bible included:)) then Justine would have to be the superstar. Balthazar and Mountolive, solid role players, stars in their ownright, but still fall in the shadow of their older sister. Now I've heard talk that Clea is really the true star, and I really want to agree - however Justine started it all and somehow holds a slight edge over Clea, which doesn't mean that Clea gives any quarter to any book - she just came happened to come second.

I was surprised to see 1 and 2 star reviews. I'd suggest to these people to read it again. All four together form this incredible little space in a world far away - characters so enjoyable and delightful - a city and culture so different yet completely understandable. Justine starts is all off and if you commit totally during those first few pages, the rest will be one of the most satisfying reads you've had the pleasure of.

The premise of Justine could be seen a simple. It's about love and how much pain it can cause. Alone Justine would be a simply stunning book, but leading off for 4 makes it a true revelation. There is pain and joy in this book at anyone can relate to, in fact embrace, and once you get there, the book is difficult to put down.

Lawrence Durrell doesn't miss a word, doesn't blink an eye, planting surprises in each corner of his mysterious Alexandria. Reading this book one can't help but think of another way to live, in another place, with all the secrets that hide in the eyes of everyone you see.

Justine is a great book. Sometimes it takes a little effort to get the prize.
Read more
11 people found this helpful
Helpful
Report abuse

Moisio
4.0 out of 5 stars An ambient sense of place
Reviewed in the United States on September 17, 2017
Verified Purchase
This book is ambient; to me it reads like a haze. In that sense, the book presumably realizes its objective of evoking Alexandria. The first person narrative is both vague and precise, meandering in time and sentiment while etching certain scenes in marble. In that way the book really sticks with you. These striking scenes don't necessarily seem so at the time, but they don't fade. Meanwhile, a sense of languor hangs over it all.

When the narrator first meets Justine, or the hunt near the end, or when Pursewarden ostensibly passes out drunk--these scenes are all written with a precision that contrasts with the overwrought navel gazing periodically indulged by the narrator.

I liked the book quite a bit, surprisingly. I'm often put off by florid prose but for some reason it works here when it is employed. Perhaps it's the necessary ingredient creating that languorous sense of the place. I imagine some people will really dislike the book because of it, but I will move on to Balthazar with only a brief wait.
Read more
3 people found this helpful
Helpful
Report abuse
See all reviews

Vivien Fisher
3.0 out of 5 stars I am no intellectual, but
Reviewed in the United Kingdom on October 25, 2020
Verified Purchase
Second attempt at this highly acclaimed novel but this time I didn't struggle through to the end. I didn't appreciate Justine many years ago, and this time I had the confidence to put it down as perhaps too high-brow for me - I just enjoy a good read!
Read more
One person found this helpful
Report abuse

GillyB
2.0 out of 5 stars Confusing story.
Reviewed in the United Kingdom on June 4, 2020
Verified Purchase
This is not an easy read and I struggled at times, but persevered until the end.
Read more
One person found this helpful
Report abuse