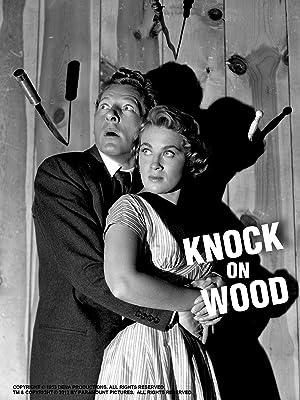 (215)
6.71 h 43 min1954ALL
Discovering that a ventriloquist is travelling to Zurich, a spy ring hides secret plans in his dummies' heads. When a second spy ring learns of the plans, they descend upon the ventriloquist, causing city-wide pandemonium.

J MillerReviewed in the United States on November 17, 2018
5.0 out of 5 stars
The Number 1 Favorite Movie of my Childhood
Verified purchase
My parents took me to see this movie at one of the majestic movie theaters in downtown Cleveland when I was a young child. The magic of that experience never left me. Danny Kaye created the most extraordinary movie experience for me of my entire childhood in Knock on Wood. Now as an aging baby boomer adult, whose cinematic tastes have broadened and deepened to a considerable extent, I still relish the secret sauces that Danny Kaye managed to put into this incredible film. Don't worry about the technical limitations of the DVD or Blu-Ray--yes, they aren't ideal, but after just a few minutes one forgets about them and becomes immersed in what may be one of the greatest comedies of all time. And try to get your kids and grandkids enthralled in this film as well--it is a timeless classic that truly delivers.
12 people found this helpful

Richard MullerReviewed in the United States on March 21, 2014
4.0 out of 5 stars
"It certainly is decraminating quite a lot, isn't it?!"
Verified purchase
When Danny Kaye's name comes up, uasually it is "The Court Jester" or "White Christmas" that comes up first. But to get to that point, there were steps along the way, and this was one of them. Perhaps the first of Dena Production's films (Kaye's and wife Sylvia Fine's company), it showcases the many facets of Danny's talents, not the least of which is song and dance. The title comes from a musical number while Kaye's character (Jerry Morgan) is recalling his childhood. As he lies on the couch in the psychiatrist's office and relates his early years he tells the shrinks that his Mommy and Daddy are constantly yelling and throwing things and fighting. "Why do you think they do these things?" he's asked. "They have to", he replies "They're married!" At the core of this film are the stolen War Plans called Lafayette X V 27, which are cleverly hidden in Jerry Morgan's ventriloquist act dummies — Clarence and Terence. Two spy rings are after the plans so that they might be sold to the highest bidder. As the spys go after Jerry they unwittingly kill off each other, setting up Jerry to be the fall guy — and so now the Police want him as well! He has to escape both of them to try to clear things up and in doing so we get some situations ripe for Kaye's antics. He hides in an Irish pub amongdt the singers and revelers — he poses as a British car salesman to avoid Police (wherein we get the very funny 'decrimination' sequence as he tries to demonstrate an unfamiliar vehicle to a prospective client) — and, in perhaps the best sketch of them all, he hides in an opera company about to perform a cossack dance! In my opinion, this sketch alone is worth the price of admittance! Overall the film takes off slowly and builds into a fine mix of comedy, pathos and romance. Anyone who loves Danny Kaye will be thriled with the picture quality and sound of this Olive Films release. Be forewarned though, there are no 'extras' — not even a trailer! Still, I am very fond of the movie and that is quite enough, thank you! I think you will be, too!.
11 people found this helpful

eliasleviReviewed in the United States on May 13, 2021
5.0 out of 5 stars
A very great comedy
Verified purchase
Knock on Wood is one of the 'great four' comedy masterpieces featuring Danny Kaye. The others are The Court Jester, The Inspector General and The Secret Life of Walter Mitty. Knock on Wood has numerous droll scenes and classic hysterically funner Kaye sequences. The most memorable are those in which he buys a hi-tech (for the era) motor car and the riotous ballet fiasco. His ability to mimic languages (eg, upper class English or Irish) is also a stand-out. Would give the film six stars instead of five of that was possible.

OTMAReviewed in the United States on October 29, 2013
5.0 out of 5 stars
5 Star Film - 3 Star DVD from Olive Films
Verified purchase
What more can be said about Danny Kaye? So many reviewers have stated that he is one the most underrated actors of all time. I had no idea that he was so underrated until I started looking for his films on DVD. WHAT'S THE DAEL? REALLY? They're either out of print or not available, I don't get it. I grew up watching his old films on TV and have a lot of them still on VHS, and decided it was time to start getting the DVDs. He's one of (if not thee) greatest talents in film history. I read an article this year that stated his daughter was excited about all of his films being released... where are they? "Knock on Wood" is perhaps my favorite Danny Kaye film, it's great fun and he does some of his best work here (and everyone loves a mystery, right?) As far as I can tell, this Olive Films DVD is the only one available (Olive has a Blu-Ray as well, but I haven't seen it.) I'm grateful to have this film on DVD regardless of the quality, it is 1.85:1 widescreen and the sound is clear - however the picture is washed out and faded, with color blobs and blotches here and there. However it's watchable for me, and I'm not too bothered by the print, but let's face it, this film (as well as Kaye) deserves a full restoration. I have a full-screen copy I taped off of AMC in the 90's that has a bright clear picture, however the sound is so muffled on that print that I have to crank up the midrange on my EQ all the way - but there has to be a good print out there somewhere. Pick this up if you love Kaye, but don't expect a perfect picture.
6 people found this helpful

Roger HowertonReviewed in the United States on December 5, 2017
3.0 out of 5 stars
Transfer Is Not Quite Focused
Verified purchase
I have several DVDs manufactured by Olive Films, and most of the transfers are excellent. However, Knock on Wood is not a great transfer. The best way to describe the picture is that it looks like a movie that was filmed in 3D. It looks like two pictures that are not aligned, slightly off so that it looks blurred, definitely far from a sharp image. The audio is great, and the story is as enjoyable as any other Danny Kaye film.
7 people found this helpful

J. OlsenReviewed in the United States on January 12, 2011
4.0 out of 5 stars
Love the movie, DVD is bare bones version
Verified purchase
Danny Kaye has always been a family favorite, and this movie is a gem. Storyline has been well covered, so I won't go there. We have had it in VHS recorded from AMC years ago (back when they were American Movie Classics) and it has seen plenty of use. We are thrilled to have it in DVD format, but wish it had been a studio release with better treatment. As mentioned in another review, it is in 1.85:1 aspect ratio and there are no extras here, not even closed captioning.
In spite of all that, I am glad that it was released at all as a regular DVD (not DVD-R, as so many classics are these days). Some have mentioned their concern that it may be a bad transfer, as they saw in "Inspector General". I had a bad copy of that once (remember that it was in the public domain and people could get away with releasing it in any form of garbage) and this is a much better quality than that was, though not as sharp and crisp as if it had been digitally remastered.
If Paramount wasn't prepared to do anything with it, then I am grateful Olive Films at least made it available to us. I'd rather have this classic than not, even if it isn't as good as it possibly could be. The movie gets 5 stars, the DVD gets 4, so if I could average the package I would give it 4 1/2 stars.

D. F.Reviewed in the United States on May 23, 2016
4.0 out of 5 stars
One of Danny Kaye's best
Verified purchase
Genre: Espionage-Comedy
Stars: 4

Pros:
-probably Danny Kaye's best (or it is up there)
-The predictability doesn't get in the way
-Acting is good for the genre

Cons:
-I don't know if there is a Kaye film that is really 5 stars for me

I really think that this is one of the best films he has done. If you like Danny you will thoroughly enjoy this movie. If you don't you may still find it good. Funny, well executed, and not too much.

David AllenReviewed in the United States on May 22, 2018
5.0 out of 5 stars
This has to be my favourite Danny Kaye movie
Verified purchase
This has to be my favourite Danny Kaye movie,with “The Court Jester” running a close second.It’s real laugh out loud stuff and Danny is a marvel
with his impeccable comic timing throughout the movie.When he’s not clowning,he makes a very handsome partner to the lovely Mai Zetterling
and his dancing and singing to ‘All About You’ is really charming.If you love Danny Kaye (and who does not?),you must buy this timeless gem.
See all reviews
Back to top
Get to Know Us
Make Money with Us
Amazon Payment Products
Let Us Help You
EnglishChoose a language for shopping. United StatesChoose a country/region for shopping.
© 1996-2022, Amazon.com, Inc. or its affiliates