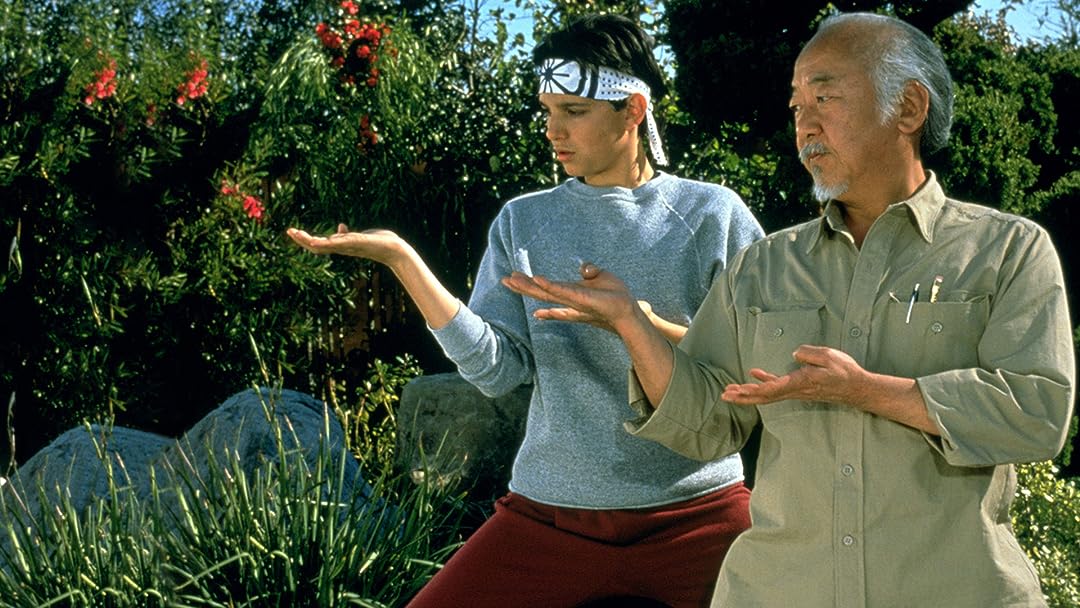 Mr. Miyagi is a human treasure.

M.Reviewed in the United States on April 22, 2019
5.0 out of 5 stars
More Please
Verified purchase
I wouldn’t have expected Sony to put so much love into releasing The Karate Kid on 4K, but they did. Great upgrades in video and audio quality when compared to the BD, additional bonus features, and inclusion of prior bonuses. I’d love to see more high quality re-releases of this vintage, and of course Karate Kid II and III.
29 people found this helpful

joel wingReviewed in the United States on October 13, 2020
4.0 out of 5 stars
All time classic coming of age story with Mr Miyagi stealing the show
Verified purchase
Karate Kid is a classic coming of age story. Ralph Macchio as Daniel and his single mother Lucille LaRusso (Randee Heller) move from New Jersey to Reseda, California. His first friend at his new school is Ali Mills (Elisabeth Shue) which draws the anger of her ex-boyfriend Johnny (William Zabka). Johnny in turns starts picking on Daniel and beating him up. That leads him to turn to his apartment supervisor Mr. Miyagi (Pat Morita) for help. Miyagi teaches him the art of self-defense that leads to a classic final confrontation with Johnny at a Karate competition.

It’s Mr. Miyagi that walks away with the movie. He teaches patience, talking through problems, and wants to avoid fighting. He’s only pushed to training Daniel after he sees what kind of teacher Johnny has. He emphasizes aggression and no mercy. The dichotomy between the two men and styles is what drives the story. It also really lets Morita shine in the part. He’s the wiseman to the upstart kid and the evil villains.

The training Miyagi puts Daniel through is one of the most iconic parts of the film with his phrase “wax on, wax off.”

Likewise the school Johnny belonged to Cobra Kai has gone down in film history as total jerks.

This movie is still great with a memorable good vs evil confrontation in high school.

T-ZER0Reviewed in the United States on November 23, 2019
5.0 out of 5 stars
I’m Ready to do the Crane Kick
Verified purchase
I had a choice when buying the Karate Kid movies. There was a collection that had all the movies, including the god-awful “Next Karate Kid” and another that included the three originals with the 2010 reboot. The problem with that set is there’s no Blu-Ray version.

So I decided to get the versions seperately then get Cobra Kai. The quality on this Blu-Ray is superb, and lives up to its name. The main menu shows scenes from the film as well as some music. You’ll be satisfied with it, I promise. I wish it had “The Moment of Truth” music video by Survivor as a special feature. But I’m not complaining. Being a Song product, this will work on your PS4, and the barcode on the back is compatible with Vudu Disc to Digital, so you can convert it if you’d like. Overall, a great buy. My only real complaint is that the flap on the side of my Blu-Ray case won’t snap shut. But that’s a petty complaint and not worth getting a replacement.

Also the artwork inside and the sunset shot on the back is from Karate Kid Part III, not the first one. I know most people get that confused and it’s a bit annoying, but you can ignore it I guess. Go ahead and buy! 👍🏽👍🏽
11 people found this helpful

Dee KayReviewed in the United States on February 2, 2020
5.0 out of 5 stars
A Stone Cold Classic Eighties Sports Movie
Verified purchase
You might like this if: If you enjoy any kind of cheesy underdog coming-of-age story. Because that's what this is. Rocky in a high school with 80s music and clothes.

You might not like this if: You don't have a heart. Or good taste. Or if you believe a film can't be good if it's not original and artistic.

TL;DR - Who doesn't like this film??? A kid moves from Jersey to California with his single mom and gets bullied. He meets a girl. He meets a mentor. He gets in a few fights. And there is a big show down in the end. It's amazing. It's classic. It might not be well-acted and it's definitely a Rocky ripoff but who cares. It's still one of one in terms of classic eighties coming-of-age sports movies.
10 people found this helpful

J. WestReviewed in the United States on August 15, 2019
5.0 out of 5 stars
The Most Incredible Martial Arts Early 80's Film Ever
Verified purchase
This is one of my favorite martial arts early 80's film ever. Marvelous roles and performances by Ralph Macchio, Pat Morita (R.I.P.), Elizabeth Shue (Death Wish 2018, Back To The Future 2, Piranha 3D, & Adventures In Babysitting), and also Martin Kove. This has always takes me back of how great and awesome the film really is. Will always be the classic one we all enjoy. It gets better every time I watch it again. I recommend it to those new generations haven't seen it yet. Love the film forever.
11 people found this helpful

Khristine JacksonReviewed in the United States on January 3, 2021
4.0 out of 5 stars
RIP Pat Morita ,.
Verified purchase
This is one movie that I have probably seen more than 15 times over 20 years,. !! The cast, the script, the locations and of course the timing was ,., spot on when it was filmed. Can you imagine anyone else playing Mr. Miyagi Or Daniel Larusso..? I know that a younger generation has discovered this feature,.because it stands the test of time. Ralph will always be the "Karate kid" ..even though they had a female play over 20 years ago. That certain female won two Oscars ... As every one has said.. Every young boy ,who's being raised in a single parent household. Deserves a mentor like Pat's character . So that he can avoid the pitfall's in life. Such as "bullying,drugs,jail and death. Karate like the military instill's discipline and help's establishes core values. Boys who eventually become Men will need a path to follow in life..that will guide them into making better decisions. Joining and Gangs,selling drugs and re-current run-ends with the law won't offer you nothing but a ..life in prison. Nor will walking into a school with a loaded gun and mowing down a bully,his friends and other random victims . This movie isn't for boys alone..young girl's and other older adults have these encounter's as well.. This is the perfect "Under-dog" film of all time..!!
3 people found this helpful

TheStr8UpReviewed in the United States on April 15, 2018
5.0 out of 5 stars
Timeless!
Verified purchase
I've seen this movie so many times I've lost count. It never gets old to me. There are only a few movies I can watch over and over.
14 people found this helpful
See all reviews
Back to top
Get to Know Us
Make Money with Us
Amazon Payment Products
Let Us Help You
EnglishChoose a language for shopping. United StatesChoose a country/region for shopping.
© 1996-2022, Amazon.com, Inc. or its affiliates