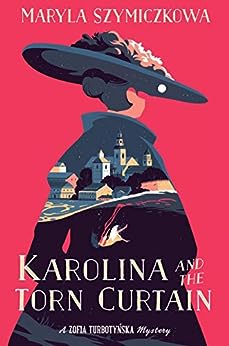 by Maryla Szymiczkowa (Author), Antonia Lloyd-Jones (Translator) Format: Kindle Edition
Part of: A Zofia Turbotynska Mystery (2 books)
See all formats and editions
Sorry, there was a problem loading this page. Try again.
“An ingenious marriage of comedy and crime” (Olga Tokarczuk, Nobel laureate): when amateur sleuth and cunning socialite Zofia Turbotyńska’s beloved maid goes missing, she dives deep into Cracow’s web of crime, with only her trusted cook for company.

Cracow, 1895. Zofia and her maid Franciszka have their hands full organizing Easter festivities, especially with the household short one servant—where has the capable Karolina disappeared to?

Shortly after, Zofia hears that the body of a young woman, violated and stabbed, has washed up on a bank of the River Vistula. Domestic work can wait—Zofia must go investigate. Shockingly, the body turns out to be none other than Karolina. Working with the police, Zofia’s investigations take her deep into the city’s underbelly—a far cry from the socialite’s Cracow she’s familiar with. Desperate to unearth what happened to Karolina, though, she pushes her prejudice aside, immersing herself among prostitutes, gangsters, and duplicitous politicians to unravel a twisted tale of love and deceit.

"Brings Cracow vividly to life and presents the period's views on women with sly wit. This mystery will please readers looking for an unusual amateur sleuth and a picturesque setting."

"Moira Quirk's performance of this novel, set in 1895 Kracow, bristles with period politics and feminist viewpoints while offering a complex mystery and an appealing heroine...Quirk handles the Polish names and places with ease, adding atmosphere to Szymiczkowa's original plotting...Quirk deftly delivers all the subtleties, conflicting attitudes, and even bits of humor in this unusual mystery."

"An ingenious marriage of comedy and crime."

Maryla Szymiczkowa is a pseudonym for partners Jacek Dehnel and Piotr Tarczynski. Dehnel is the award-winning author of numerous books, including the novels Lala and Saturn and the poetry collection Aperture. Tarczynski is a translator and historian. They live in Warsaw, and Mrs. Mohr Goes Missing is their first shared project.

gammyjill
TOP 500 REVIEWER
5.0 out of 5 stars Excellent second book in the series...
Reviewed in the United States on April 11, 2021
Verified Purchase
“Karolina and the Torn Curtin”, is the second book in the “Zofia Turbotynska Mystery series. Written by Maryla Szymiczkowa, the books are set in Crakow in the mid-1890s, and feature Turbotnska, the wife of an anatomy professor. Zofia could be seen as merely a wealthy bored housewife, but she is called by her interest in police work and intelligence to solve crimes which have otherwise been ignored or brushed aside by the Crakow police.

Maryla Syzmiczkowa, who is actually a two-man writing team, introduced Zofia in the previous book, “Mrs Mohr Goes Missing”. It was about the solving a crime in a charity setting. The writing was a bit lighter than her second book, where the ills of late-19th century Crakow are on full display. From white slavery to police corruption to bordellos to differences between the Polish Catholic and Polish Jewish communities, this book is a bit more serious than the first. The crimes are more brazen and the plot is more convoluted, but the life and the setting and the characters are also more charged. There’s a seriousness in this book not apparent in the first.

“Karolina and the Torn Curtain” shares with most of the Scandinavian mysteries a deep dive into the politics of the time, as well as glimpses of how people lived in the time. It’s also best read by people who know a bit about the times. I hope the next book in the series is as good as this one.
Read more
3 people found this helpful
Helpful
Report abuse

cheapie pie
5.0 out of 5 stars Absorbing but a little dark
Reviewed in the United States on May 5, 2021
Verified Purchase
I loved Mrs Mohr Goes Missing! On the strength of that volume, I ordered this one. The sleuth, Mrs Turbotynska, does not disappoint. Her antics are sometimes laugh out loud hilarious. Unlike the earlier volume, this one takes readers through Krakow's underbelly during the late nineteenth century. The resolution of this mystery is much different from that of the previous volume. Both volumes are translated very well from Polish and the historical context of the era is detailed and seems accurate. My recommendation would be to start with the first volume. If you like it, and I expect that you will, then read this one.
Read more
Helpful
Report abuse

Sufue
VINE VOICE
5.0 out of 5 stars A wonderful historical mystery set in 1890s Cracow....
Reviewed in the United States on March 29, 2021
I can’t figure out how I missed the first book in this series, because this series is so exactly my sort of thing – a well-written historical mystery in a slightly unusual (to me, at least) setting: Cracow in the waning years of the 19th century. In the 1890s, Cracow was a part of the Austro-Hungarian Empire, albeit with a fair amount of autonomy, which included maintaining its own universities. And in this time and place, Zofia Turbotynska is the intelligent wife of a medical professor at Cracow’s ancient and respected Jagiellonian University.

Intelligent enough, in fact, that she isn’t convinced that the killer of her recently murdered maid, Karolina, is actually the man who was shot to death while trying to evade capture. Was that man really the “newly graduated engineer” who had recently been courting Karolina – or just a convenient scapegoat? What about Karolina’s long-term sort-of boyfriend – might he have been involved? Or the cadets who had been partying a bit more than they should, just before discovering Karolina’s body in the river?

So when Zofia’s other maid, Franciszka, sees the supposed dead man in town, looking very much alive, Zofia and Franciszka start investigating. Along the way, they confront a few stereotypes, meet a professor with an interesting research specialty, do a bit of jostling for social position, talk with local authorities about some of the latest developments in forensics (!!!), visit with Karolina’s mother, learn a bit more about brothels and the sex trade than a pair of respectable women should know, make plum jam, and eventually figure out who really did it. And then of course, Zofia’s sharp elbows prod the authorities to do something about it – all while keeping her husband, Ignacy, in the dark about what she has been up to.

I found Karolina and the Torn Curtain to be a wonderful read – mostly quick and fun, but with some serious moments that made me think. These serious moments also made Zofia think and grow, and I look forward to seeing how she develops in later books. As an aside, I loved the little quotes at the beginnings of the chapters, and had fun seeing them “come true” in some unexpected ways. The historical note at the end of the book provided some nice background, and also got me curious enough to do some googling about Cracow and the Austro-Hungarian Empire on my own. I now plan on going back to read the first book, and also will be eagerly waiting (hoping) for the next two books, currently available in Polish, to be translated into English. And finally, my thanks to Mariner Books and NetGalley for the advance review copy!
Read more
One person found this helpful
Helpful
Report abuse

kathleen g
TOP 500 REVIEWER
5.0 out of 5 stars a fun historical mystery
Reviewed in the United States on March 23, 2021
It might take you, like me, a bit to settle into this unusual import from Poland but give it a chance. Set in 1895 Cracow, its the tale of how Zofia, a wealthy woman, sets off to find out who killed her housemaid Karolina and left her on a riverbank. Well, former housemaid because the young woman, who Zofia thought was virtuous, had just resigned, which deeply annoys Zofia. She enlists her maid Francisczka to help her more or less troll the city for information about a man who seemed to be courting Karolina. Not certain that the police found the true villain, she keeps up her quest, entering places where "respectable" women aren't usually found. The knowledge she gains begins to change her mind and shape her thoughts about the men she knows and about what women are due. That sounds lofty but Zofia is not- she's a character with a quick wit, a bit of a snob, and a smart cookie. There evidently was a book that preceded this, which I missed, so it was a standalone for me and just fine at that. The language feels a bit ornate in spots but it has a rhythm that you can settle into. Thanks to Netgalley for the ARC. Not a cozy but a historical mystery featuring a dynamic female protagonist in a setting that was new to me - a treat.
Read more
Helpful
Report abuse
See all reviews