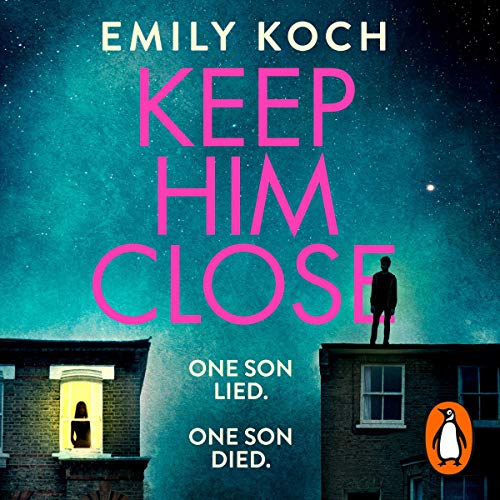 One son lied. One son died.

Alice’s son is dead. Indigo’s son is accused of murder.

Indigo is determined to prove her beloved Kane is innocent. Searching for evidence, she is helped by a kind stranger who takes an interest in her situation. Little does she know that her new friend has her own agenda.

Alice can’t tell Indigo who she really is. She wants to understand why her son was killed - and she needs to make sure that Indigo’s efforts to free Kane don’t put her remaining family at risk. But how long will it take for Indigo to discover her identity? And what other secrets will come out as she digs deeper?

No one knows a son like his mother. But neither Alice nor Indigo knows the whole truth about their boys and what happened between them on that fateful night.

Keep Him Close is a dark domestic drama from an award-winning writer.

Special invitation from Audible!
Learn more about Membership
List Price: $28.35
You Save: $3.54 (12%)
By completing your purchase, you agree to Audible’s Conditions Of Use
Sold and delivered by Audible, an Amazon company

Homeburd
5.0 out of 5 stars I highly recommend it
Reviewed in the United States on March 12, 2020
This one took me a bit by surprise as I thought from the blurb that I’d like it but didn’t expect to love, love, love it. Alice and Indigo are the central characters and when one of Alice’s sons is killed, both women question how well they actually know their own sons. I thought the characters were really well drawn and the way the relationship between the mothers evolved was a joy to read. I really connected with this one even though I don’t have children. It was emotional in places but overall it’s a blooming great read and I highly recommend it.
Read more
One person found this helpful
Helpful
Report abuse
See all reviews

LynneK
5.0 out of 5 stars A heartbreaking yet thrilling read
Reviewed in the United Kingdom on June 23, 2020
Verified Purchase
Having read and enjoyed Emily Koch's debut book If I die before I wake, I was really looking forward to this one being released. I was certainly not disappointed.
The story being told by both mothers - one whose son died and one whose son lied - really made you feel for each character.
It told the story of relationships between mothers and their children beautifully and was such a sad, heartbreaking read at times.
I very much recommend this book!
Read more
11 people found this helpful
Report abuse

Terri
1.0 out of 5 stars Rubbish
Reviewed in the United Kingdom on March 20, 2020
Verified Purchase
Long drawn out story with a weak ending - I really don’t understand the 4 and 5 star reviews. I am heartily sick of wasting money on books based on reviews only to find they are rubbish.
Read more
5 people found this helpful
Report abuse

V. O'Regan
3.0 out of 5 stars A slow burn domestic drama
Reviewed in the United Kingdom on March 21, 2020
Verified Purchase
Alice Hyde’s son is dead and Indigo Owen’s son has been accused of his murder. Indigo is determined to prove that her beloved Kane is innocent.

While searching for evidence to clear his name, she is helped by a woman who takes an interest in her situation. Yet Indigo doesn’t realise that her new friend has her own agenda. Yes, it’s Alice!

Alice’s reasons for this deception are fairly straightforward given that she is seeking to understand why her son died. There are a fair few shady characters on the fringes of the women’s investigation and a few twists.

This is another novel that uses the format of switching between characters’ perspectives. Thankfully, it mainly is just Alice and Indigo so not as confusing as some I have read.

I felt that primarily this was a domestic drama exploring elements of motherhood rather than a thriller even if a crime is at the heart of its plot.

Nothing at all wrong with that but I just don’t find this kind of novel particularly engages my attention. So it proved rather slow going for me.

Louise886
4.0 out of 5 stars Slow burn
Reviewed in the United Kingdom on April 5, 2020
Verified Purchase
Lou goes out with his brother Benny and his friends. Somehow he falls to his death off a parking garage. Kane is arrested first his murder.

Lou’s mother Alice and Kane’s mother Indigo become friends and try to figure out the truth of what happened on that fateful night.

I liked the character development and enjoyed the story. I found it a little slow in places but very interesting overall.
Read more
One person found this helpful
Report abuse
See all reviews