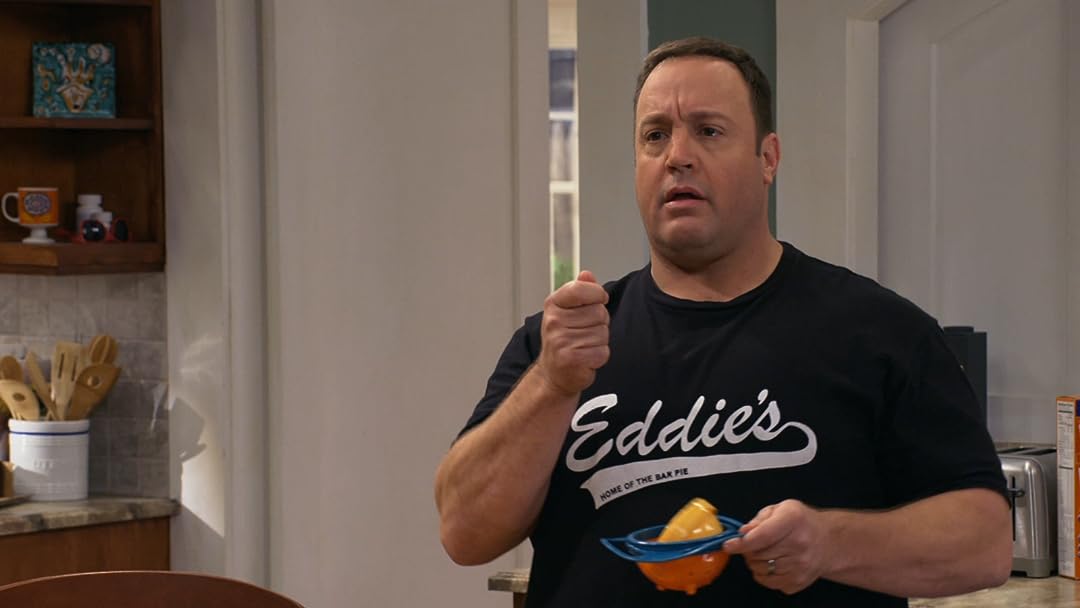 (366)
5.62017X-Ray13+
KEVIN CAN WAIT stars Kevin James as a newly retired police officer looking forward to spending carefree, quality time with his wife and three kids, only to discover he faces tougher challenges at home than he ever did on the streets. Kevin's retirement plans consist of chilling with his family and having epic adventures with fellow retirees Goody, his former partner and close friend, and Du...

C HReviewed in the United States on October 7, 2017
5.0 out of 5 stars
It DOES get better ...
Verified purchase
After watching the pilot, I was very discouraged. It's no KING OF QUEENS, which is my favorite show ever. But it gets better, it grows on you. Several of the shows made me actually laugh aloud. They borrow some of the same plots as KoQ. Basically, it's the same show - Doug is slightly smarter, no Father in Law. At the end of the 3rd disc, Donna had begun to grow on me. She just shouldn't have been cast as Kevin's wife, not much chemistry. His new friends are WAY not as funny as his old ones. His eldest daughter is played by a really good actress, though. So I like it, doubt I'll ever LOVE it but I hope it stays on the air and I'll buy all the seasons on DVD.
12 people found this helpful

RaeReviewed in the United States on January 10, 2018
4.0 out of 5 stars
A Good First Season For What Is Shaping Up To Be Another Kevin James Hit
Verified purchase
I quite enjoy the new version of Kevin Can Wait, for all the reasons cited in my review of the second season. However, I don't wish to minimize the quality of the first season. Although I had more of that dreaded "I could take it or leave it" feeling during the first season, often missing an episode and then not bothering to watch it when it re-aired or hit digital, the quality of the show was very high, the family theme and wholesome message was well appreciated in my home and the team employed by the production was doing an excellent job at conveying that sense of reality, that a family really lives on that set, that these people really love each other, and all that we expect when we watch a show like this. It just got better when the additional storyline of a man dealing with his wife's death was added. Suddenly it felt like Kevin James was really saying something about how life works while allowing himself so many new opportunities to tell interesting stories while making people laugh. Season One was good. Season Two is great. But don't ignore Season One if you have the time to watch it as it really is decent quality family entertainment.
4 people found this helpful

Richard M. MoralesReviewed in the United States on August 1, 2017
5.0 out of 5 stars
Okay all you lack-of-humor-naysayers, this is good humor!
Verified purchase
Okay, all you lack-of-humor-naysayers, this is good stuff! You should try living outside of the United States for a few decades, then watch some cool Americana like this. It makes me homesick. This is just an initial review, but this new series is sort of a combination of the Honeymooners, push-the-envelope-as-usual-on-the-liberal-stuff, and wacky childish behavior. Even the Brit putting up with the idiot American is very cool. Great script writing! (Wow, Episode 12, Season 1 is sheer genius. I'm sure the "whacko divorced" stuff has been done before, but it's still funny.)
5 people found this helpful

Obi WanReviewed in the United States on October 4, 2016
3.0 out of 5 stars
It's okay.
Verified purchase
This is okay. I laughed through 2 episodes. I was never bored. The cast of characters has enough differences to let them all play off of each other in a comedic way.

But it's not a show I'd rush home to see. Nor one where I could see myself becoming invented in the characters. It's got a very 1990's sitcom feel to it with soundstage sets and laugh tracks.

Kevin James is good, but he's too centric in the show. They make the rest of the cast supporting players rather than robust characters with substance.

I certainly don't hate this. But I don't love it either.

4given2_4giveReviewed in the United States on April 6, 2021
5.0 out of 5 stars
Hilarious! Double Trouble.
Verified purchase
The duo at it again! I didn't know they were back on TV. I saw this on my prime movie option. I laughed so hard watching these two. Let's just say I watched it free, and bought it.😄
One person found this helpful

jason randallReviewed in the United States on July 7, 2020
5.0 out of 5 stars
Really good and price is reasonable
Verified purchase
Was really great to watch and the price was reasonable bought it because I never seen it when it was on tv and wanted to see what it was about season 1 was good, as far as season 2 I can take it or leave it.
One person found this helpful

Cindy WhiteReviewed in the United States on August 6, 2019
5.0 out of 5 stars
Love this show
Verified purchase
I really loved the first season of Kevin Can Wait. Did not care for the second season. I had been looking for this dvd. Loved watching it again and my friend watched it and loved it also.
2 people found this helpful

DDDReviewed in the United States on September 15, 2017
5.0 out of 5 stars
5 STAR ALL THE WAY
Verified purchase
Totally enjoyed Kevin can wait Season 1 Lots of laughs First episode had me a bit worried but stuck with it and by the second episode I was hooked. Clean and funny, great story lines and great acting. Kevin James does not disappoint. Buy Season 1 , you won't be disappointed.
4 people found this helpful
See all reviews
Back to top
Get to Know Us
Make Money with Us
Amazon Payment Products
Let Us Help You
EnglishChoose a language for shopping. United StatesChoose a country/region for shopping.
© 1996-2022, Amazon.com, Inc. or its affiliates