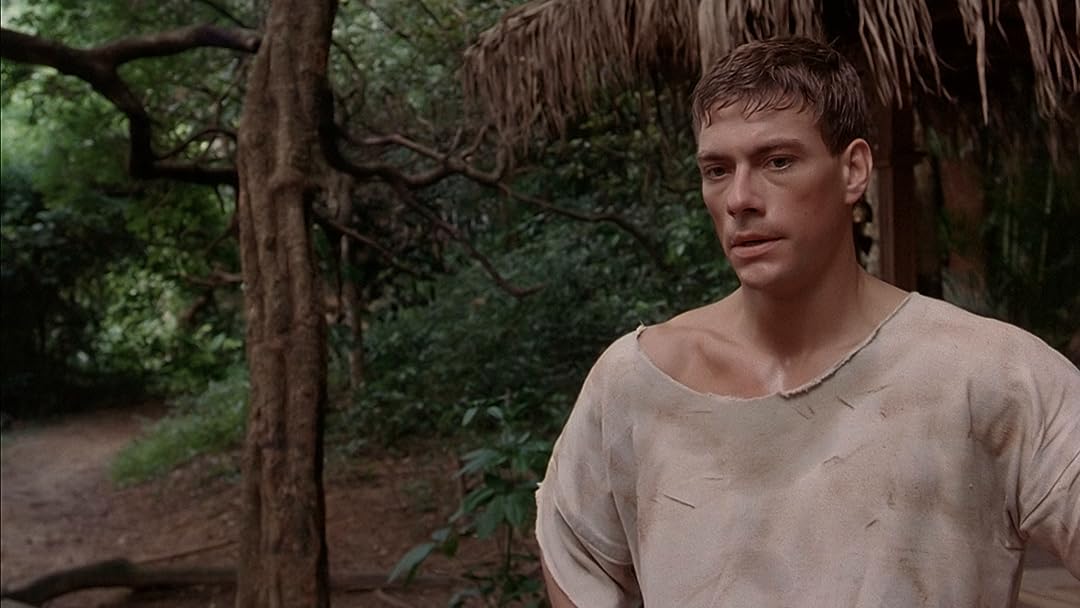 Sean WanderseeReviewed in the United States on November 26, 2020
3.0 out of 5 stars
Bloodsport 2: Now With Broken Glass Fists
Verified purchase
Eric is the best kickboxer in the US and thinks that means he’s the best in the world. He travels to Thailand to find out how thoroughly wrong he is when Tong Po breaks his back. His little brother Kurt decides to get revenge as one does when a psycho wrecks your brother in a foreign country. Luckily he finds a kickboxing master who trains in the art of not getting thoroughly wrecked himself leading to a showdown full of broken glass and kicking.

Jean Claude Van Damme stretches his acting muscles in a more traditional martial arts movie. It follows the usual plot of hubris, tragedy, training, trauma, triumph with a heavy emphasis on the training. The highlights of this movie are in the beginning when Van Damme acts as wet as a freshly caught trout with his wide eyed innocence and his agony at his brother’s crippling are unintentionally hilarious, as is his sleeveless denim jacket. You get some good travelogue footage of both the beauty and the sleaze of Bangkok before settling in to an overly long training routine. The movie felt like a rerun of Bloodsport with a lot of the same Hong Kong actors appearing but lacking the presence of Bolo Yeung as a good villain. Tong Po is creepy but not super imposing and doesn’t make for a real solid final boss. The final fight is a good one however with the broken glass on their fists. Not bad, sometime incredibly hilarious with the less than stellar melodramatic acting, but overall just kind of generic.

Mike's tech reviewsReviewed in the United States on May 31, 2020
3.0 out of 5 stars
Pretty good story, but the movie falls short in many ways
Verified purchase
First just want to thank Amazon for finally making this available on Prime. It had been so long since I'd seen KB 1, 3, and 4, and I'd always wondered what part 2 was about.

Not sure it was worth the wait. It is really quite contrived and unrealistic. It does not start out with any kind of action, just some cheesy feel-good stuff. We finally get to see one good fight which is pretty good, then the plot gets predictably sinister.

Not much original from there. You can imagine that the next major fight doesn't go particularly well for the good guys.

There's not much action outside the ring, except for one sinister scene which wasn't particularly well done. The original Kickboxer had lots of side action and interesting scenery. I thought Mattias Hues would add quite a bit to a film like this, but he totally disappoints this time. It would have been better had he been the main villain instead of "Tong Po" yet again (don't forget I'd seen KB 3 & 4 long before, as presumably many have)

The final fight couldn't be much more unrealistic, like a Rocky version of Muay Thai. And it all happens way too fast, like they were running out of time to finish the film.

Definitely see Kickboxer 3 and 4, they are both really good, with Sasha Mitchell as way more of a bad ass, having gained more muscle and attitude. By comparison, he looks and acts quite boyish in this one.

EmcalReviewed in the United States on October 30, 2020
1.0 out of 5 stars
Horrible Continuity...Among Other Things.
Verified purchase
So the original Kickboxer movie ended on a high note, with both the Sloan brothers being safe, one of them having beaten Tong Po into the ground, and presumably gone on to be with the female lead; then poof..."Tong Po killed my niece and both your brothers, new Sloan brother that no one made mention of in the first movie, but somehow magically exists for the sheer convenience of pumping out a sequel". There is no explanation as to how we got from the ending of the first movie to here. This was just a Hollywood cash-grab, because the first one did so well, they figured they could capitalize on it's popularity. Fight scenes were mediocre at best, the acting was lackluster, and it didn't have the "charm" that many of these kinds of movies from that time period carried with them. This sequel could have been so much better, but instead we are left with a sad reminder of what could have been.
One person found this helpful

MichaelReviewed in the United States on November 27, 2009
3.0 out of 5 stars
"I see no fat lady, I hear no singing ... It's not over yet"
Verified purchase
Not unlike Daniel Bernhardt in [[ASIN:B00005MM61 Bloodsport 2]], TV star Sasha Mitchell landed himself the tough gig of trying to live up to Jean-Claude Van Damme's performance in one of the defining martial arts films of the '80s. With two returning cast members from the original film, a script by Hollywood heavyweight David Goyer ([[ASIN:B00005JNJV Batman Begins]]), and with the undisputed king of trashy B-movies Albert Pyun ([[ASIN:0792835735 Cyborg]]) in the director's chair, Mitchell managed to remain entertaining for 90 minutes but failed from the get-go to be remembered as fondly as Van Damme is for his exploits. It's a good little kickboxing movie and definitely a better-than-average outing for director Pyun, but fans of the original [[ASIN:0783114885 Kickboxer]], if they so choose, can ignore this spin-off adventure and not miss out anything that wasn't better in the first movie.

The story: following the death of his brother Eric and the murder of his brother Kurt at the hands of the Thai ex-champion Tong Po (Michel Qissi), the last remaining Sloan brother - David (Mitchell, [[ASIN:B000EU1QC2 Step by Step]]) -takes over their inner city kickboxing gym and uses it as a haven for troubled youth. Upon turning down offers to reenter the kickboxing circuit by a greedy promoter (Peter Boyle, [[ASIN:B000UR9TKK Everybody Loves Raymond]]) and Tong Po's nefarious manager (Cary Tagawa, [[ASIN:0790729997 Mortal Kombat]]) looking for a match between the ex-champ and the last remaining Sloan brother, David finds himself losing his best friend (Vince Murdocco, [[ASIN:B000094FE2 Ring of Fire]]) to the circuit and himself in the hospital following an attack on his gym. Debilitatingly wounded, he must accept the help from his late brother's teacher - the wise and comedic Xian Chow (Dennis Chan) - if he hopes to regain his confidence and put an end to the circuit's corruption.

The one major fault that the film bears is that its ending comes way too fast: the film is of average length, but the inevitable confrontation between David and Tong Po comes at the end of what feels like a very short journey and with minimal preparation on David's part. Sure, there's a training montage, but it's nothing as remarkable and meaningful as Van Damme's excursions in the jungle. If you can get over that, though, the movie is pretty entertaining and solidly put-together for a Pyun picture. Both the protagonists and villains happily ham it up without delivering outright bad performances, and do so to the tune of one of the most outspokenly awesome '80s-sounding soundtracks I have ever heard. The sappy situations David finds himself in - whether it's opening his doors to a foul-mouthed homeless kid or teaching ethics to unscrupulous fight promoters - is the stuff that B-movies are made of but are so wholesomely entertaining in their earnest delivery that it's hard not to keep watching.

Indeed, how entertained you are by the rest of the movie will determine whether or not you can forgive the film's fight content. No, it's not bad, but there just isn't a lot of it: not including a clean sparring session between Mitchell and Murdocco and a short montage of the latter, there are only three fights, featuring Mitchell, Murdocco, Tong Po, and B-movie baddie extraordinaire Matthias Hues ([[ASIN:6301885538 I Come in Peace]]). The quality of the fights (choreographed by Benny 'the Jet' Urquidez) ranges between good and decent, with good cinematography but no real technical know-how and the fact that the two Tong Po encounters are shot almost entirely in slow motion. The final David/Po showdown, despite featuring the former being beaten so bloody that he looks like a zombie, lacks the emotion and back-and-forth action of the original Van Damme fight, so there's a good chance that devotees of the first film will deem this one unfavorable for ending on a technical low note.

However, anybody who was a bit put off by the exoticness of the first film may prefer this one for its close-to-home-ness; by the standards of traditionalists, it's definitely blander, but also a bit more accessible for folks who aren't crazy about Van Damme. Give it a try, action fans.
3 people found this helpful

MisterEaseReviewed in the United States on December 1, 2020
2.0 out of 5 stars
Watch Bloodsport Instead
Verified purchase
LAME! Even the requisite bloused shirt and tipped cowboy boot outfit is a little lamer in this one. The intense facial expressions leave more to be desired. The wack backstory sucks more. The fight scenes are exceedingly ridiculous. The only thing about this film that betters Bloodsport is the goofy sidekick. The Stan Bush soundtrack is standard so no marks for that.

Amazon CustomerReviewed in the United States on September 18, 2020
2.0 out of 5 stars
Absurd and Forgettable
Verified purchase
Feels like fan fiction. The story is absurd. The absurd approach works in the first one because the first one was set in a culture most of us know nothing about. This movie was set in the USA and it just doesn't work. Not a good movie, but tolerable if you have nothing else to watch.
One person found this helpful

P.S. The reviews for KB 1 try to populate into KB2 - KB2 sucks
See all reviews
Back to top
Get to Know Us
Make Money with Us
Amazon Payment Products
Let Us Help You
EnglishChoose a language for shopping. United StatesChoose a country/region for shopping.
© 1996-2022, Amazon.com, Inc. or its affiliates